The summer has flown by faster than I can remember and I am left with nothing but to express gratitude to my colleagues and mentors as I wrap up my summer at Ariadne Labs. At the beginning of the internship, I was caught in a whirlwind of supervisors striving to find work for me to do as the original project I was set to do, establishing a universal guide to medical marijuana, got put on hold. My original goals were catered to that project, however, with help from my supervisor I was able to craft new and improved goals relating to the work I am doing currently. My goals were revamped around building a professional network, gaining more patient interaction through interviews, and authorship on a published manuscript. In addition, I wanted to understand the ins and outs of a larger health care organization and I was able to do so by helping to draft OKRs for the Serious Illness Care Program for 2022.

This internship has helped me clarify my career interests in becoming a physician as it showed the caveats of being a physician. The work done at Ariadne is to improve healthcare outcomes and ensure that physicians are doing the best they can to provide equitable care to all patient populations. I want to be a part of the next generation of physicians where we utilize person-centered practices in order to make sure we are using best practices and honoring the patients’ goals, values, and choices. I have learned from my supervisors that I have great networking skills and that I am driven to always find the next step no matter where I am in the process. I am also not satisfied with leaving tasks unfinished which is why I will continue to work with Ariadne asynchronously through the Fall 2021 semester.

The advice I would give to a student interested in an internship at Ariadne is to get in touch with as many professionals as you can and learn about their journeys to where they are at now and what they value in their work. To go along with that, everyone at the company is interested in your development and growth and every employee knows how important it is to network in the professional world and they will help facilitate every connection that you may need. Another piece of advice I have is to not be afraid to ask for more or less work or to be honest about your role. At the beginning of the summer, I felt that I was being underutilized and quickly reached out to see if there was any other work to be done, and I was quick to know that there always will be work to be done from the top-down.

This summer, I am most proud of my adaptation to my new role on the team. Coming into the summer I was supposed to have one project for the whole summer where all my time would be dedicated, however, I quickly learned to adapt to my new role of helping in a myriad of different ways throughout the lab.

My first six weeks at Ariadne Labs have flown by rapidly and I am acclimated to the day-to-day operations in a virtual environment. Interning at a research lab virtually has its caveats but it has been an overall positive experience. Some positives include the convenience of being at home and not having to prepare for a commute. In addition, it adds a sneak peek into the coworker’s daily lives outside of work which we would not get in an in-person setting. On the other hand, the element of technical difficulties arises as well as the lack of an office-type atmosphere. In the remote world, we are often isolated from the outside until there are team or group meetings in our homes whereas in-person work would involve more than meetings, there would be team building events, meals, or even the daily passing by conversations with coworkers which adds to the experience of an internship. 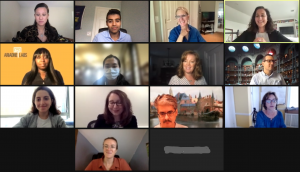 The World of Work has a plethora of similarities and differences to academic life. A similarity includes the aspect of learning in both settings. As an intern, a bulk of the work for me has been actively learning about the healthcare industry through team meetings, reading articles and participating in journal clubs with other interns. Through the journal club, the interns and I analyzed the team’s research studies, which is similar to the journal clubs we conduct in Biology Lab and Genetics and Genomics at Brandeis. However, a difference is that at Ariadne, we collect questions to ask the authors of the paper and understand their methods and next steps in research which we may not be able to do in an academic setting. Another difference is that the World of Work involves some professionals that have been working for even longer than I have been on Earth, so it is pertinent to reach out to them and gain insight on their journey to where they are currently. Ariadne has a weekly series called “The Path to Ariadne” where employees from all areas of work present their story of how they ended up at the organization with an opportunity to further connect and ask questions on their experiences.

As part of this internship, I have adapted skills that are applicable to academics and my professional life following academic studies. One skill includes using Miro, a virtual whiteboard during convenings for visual facilitating and organization. Miro is a revolutionary application to virtual spaces for staying organized with the lack of planning on office boards. Another skill I have learned is the process of coding qualitative interviews in order to find the general themes and takeaways to use in future manuscripts. The process of coding entails two researchers side by side utilizing a system to categorize pieces of qualitative information and if the two researchers both categorize the excerpt using the same theme, that data is trusted and can be used  in a manuscript. Using software such as NVivo and Dedoose makes it easier to categorize and come to conclusions among researchers. Lastly, through manuscript work, a skill that I have developed is synthesizing data from applications and interviews to create tables and visuals to use in a potential manuscript. All of these skills can carry over into academic and professional work as I navigate the field of medicine and evidence-based research through visual facilitating, qualitative coding, and quantitative figure creating.

This summer, I have the incredible opportunity of interning at Ariadne Labs’ Serious Illness Care Program. Ariadne Labs is located in Boston, MA and it is an organization made up of 150+ physicians, researchers, and analysts who pride themselves on improving outcomes of patients in health systems. Their work is oriented around quality improvement using universal guides to provide clinicians in order to minimize errors in care. They utilize a system known as the Ariadne Arc to design, test, and spread scalable solutions in health care.

For example, these solutions include a conversation guide for Serious Illness Care clinicians, a surgical checklist for the operating room, and a BetterBirth checklist to improve the efficiency of the birthing process.

My specific tasks through this internship will change every 2-3 weeks, however for this first stretch, I am working on sorting qualitative and quantitative data from the implementation of years past. A major focal point of this organization is measuring whether the implementation of programs has benefitted the health systems that use them and improve patient outcomes in the long run. In 2018 and 2019, Ariadne Labs implemented the Serious Illness Conversation Guide to 22 different health systems and trained clinicians to engage in better conversation with their patients through the guide. My job is to help measure whether this implementation was successful for these health systems and gauge whether there was a lasting impact of improved conversation between clinicians and patients. Specifically, I am tasked to sort the 200+ pages of data into a meaningful way to produce a manuscript of our implementation outcomes. So far I have successfully sorted through almost half of the data and will work towards finishing the other half by early July. The impact of my work will allow the organization to gauge whether our guide is able to be used in healthcare settings and if any changes need to be made to the implementation process.

Second, I am also a member of the Patient Guide project team where, upon approval from the Institutional Review Board, I will be able to take notes and even facilitate interviews with Serious Illness patients and families on the “What Matters Most Workbook”. The purpose and impact of this project are to ensure that clinicians are aiming towards patient-centered care and listening to the goals and values of each patient before jumping to treatment options for serious illness. As of now, I am in charge of formatting the workbook so it can be more user-friendly and ensure there are no technical issues with filling out all the important information which is the basis for each interview.

As I embark upon this journey of improving patient outcomes one step at a time, I have three goals in mind. I would like to tackle the issues in health care delivery and how to create scalable solutions to combat inequalities. I hope to prepare for patient interaction as I work my way up to medical school and beyond. This opportunity positions me to prepare for conversations with patients surrounding their medications and diagnoses and generate a human-centered design process for this patient guide. I hope to be more aware of methods of conducting clinical research and tying it to creating notable solutions in healthcare while expanding my network of healthcare professionals. Lastly, contributing to the development of the quality of life for patients battling serious illness would be a tangible goal that I could attain by being a part of this transformative research initiative.