I am almost completely at a loss for words when I try to describe all that has happened to me in the last third of my internship. To say it has changed my life is an understatement. Everything is different. But first I need to explain how I got here:

In my last three weeks with Bible Raps, I got to go “on tour.” Matt, Matan, and I went to four different camps in five days, all in the gorgeous northern PA mountains. As a “camp person” myself, I love experiencing the different cultures and embracing all the different modes of camp life. I also got into the groove of my job. I knew when to start handing out the packets at the concerts, which songs to film, and I even got to jump in on some songs. I also helped to run the workshop, working with kids on learning and writing. After driving 12 hours overnight from PA to GA, we were once again at Camp Ramah Darom, my home turf. But this time, I had a lot more to do. Almost all the workshops we put on that week I ran myself. I chose and complied the text to learn, ran the study, gave the explanation, helped the kids write, and walked them through the recording. My  favorite song from the week is about Nachshon, who according to tradition was the first to walk into the sea, causing God to part the waters.  Here is a short video of the song and the recording process!

I also finished up and performed my first original Bible Rap about the book of Ruth! It was so great being able to share it with all of the counselors and kids. With more work, it will hopefully be incorporated into the Bible Raps curriculum and appear on the next album! Here’s a video and a pdf of the Torah Rap-Map. 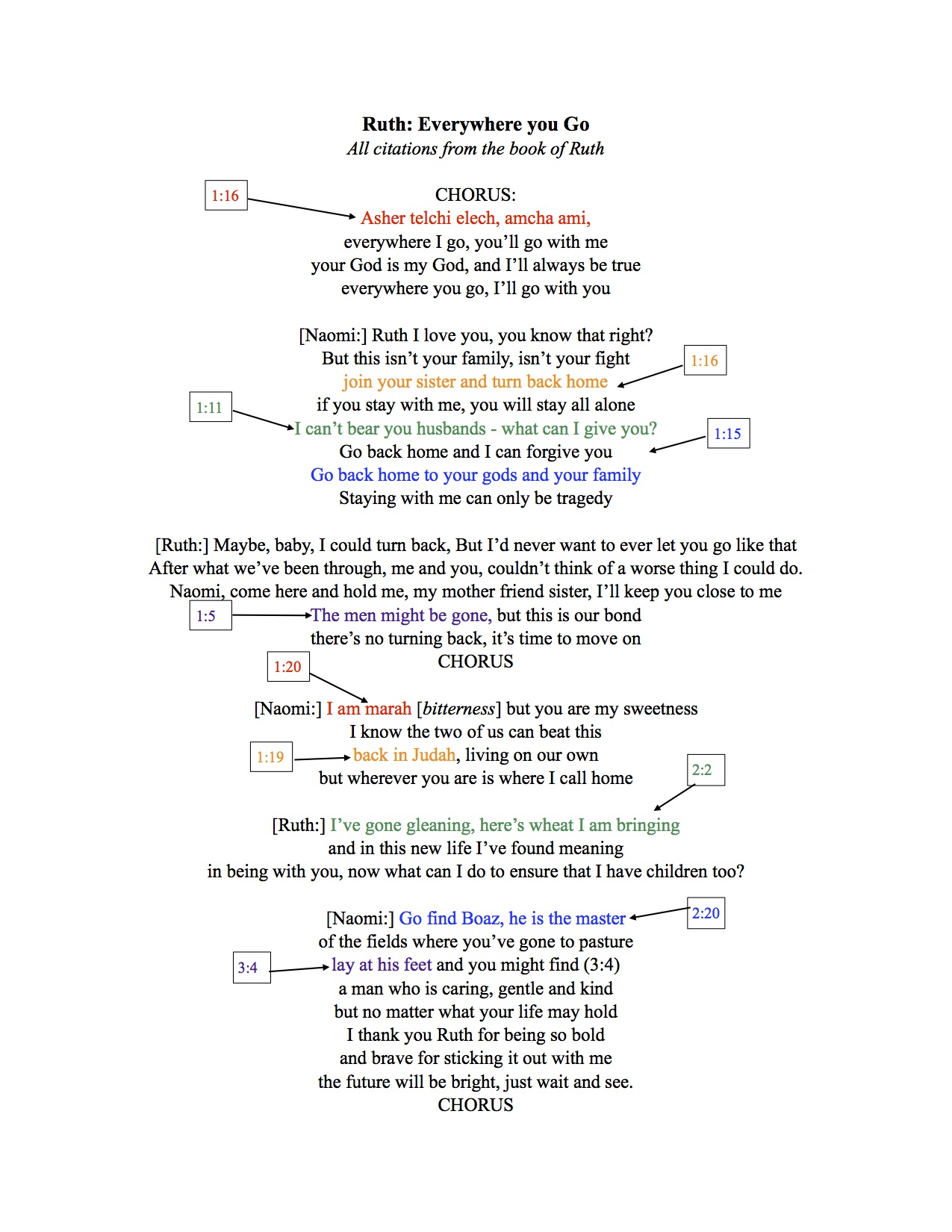 All throughout that week and once I was home, I spent most of my time making videos with the rap-maps of the songs in the curriculum for teachers to use. They aren’t public yet, but I hope to share those soon!

I had such an amazing experience with Bible Raps, especially traveling and running the workshops, that I’m in discussions with Matt to continue working with them! (more on this later.)

After a week at home I was off to Montclair New Jersey for the NewCAJE conference for Jewish education. It was an incredible week. I had the opportunity to perform my Jewish music for the first time and had such amazing responses. 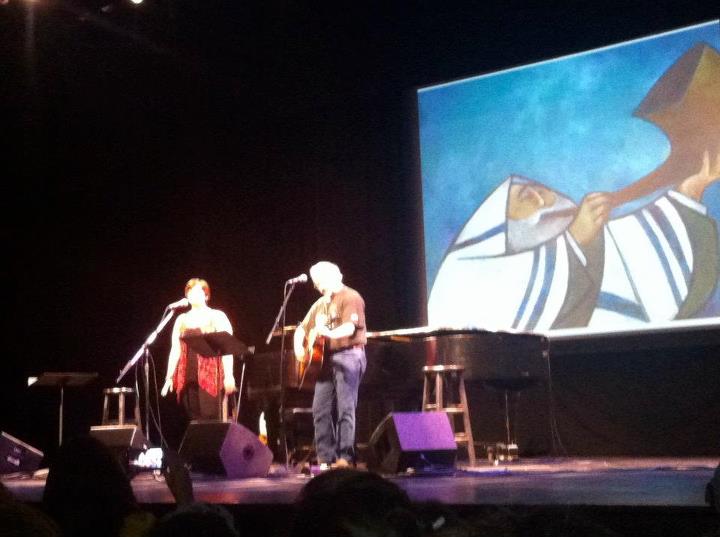 Teachers want to use my music in their classrooms and bring me in for workshops. I received encouragement from new friends and musicians that I have loved an admired all my life. I was also able to represent Bible Raps, and ran a 2 hour presentation on their behalf to five incredibly engaged educators. I learned so much from them, and all five want to bring me in for workshops this year!

This is the jump-start to a year full of singing, writing, recording, and traveling. I have been so inspired and motivated from this summer. My advice to budding artists? Just do it. Stop waiting for some future time to make it happen. That time is right now. 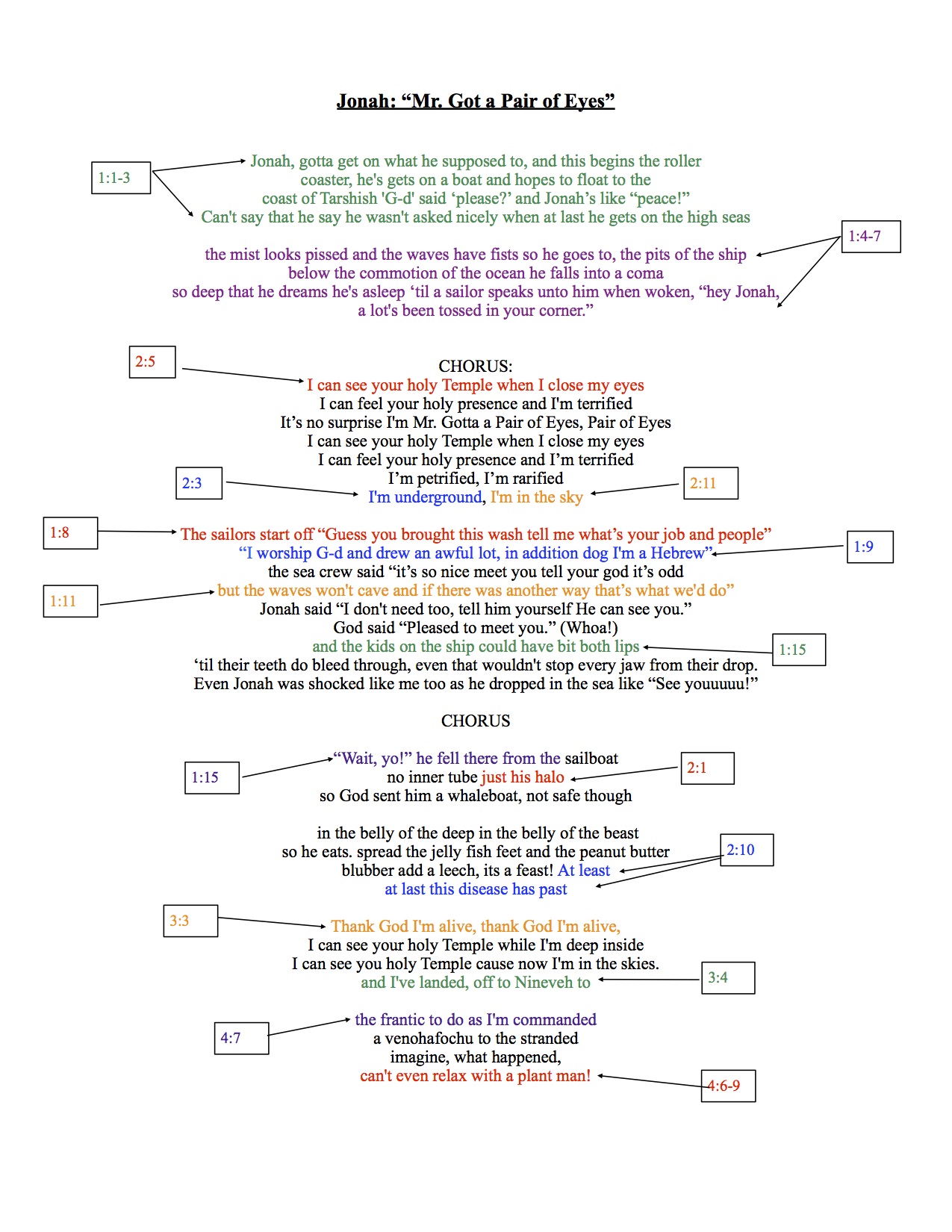 When people ask me what I’m doing this summer, I always smile, shake my head, and laugh a little. Not because I don’t want to tell them, but because it’s kind of hard to explain.  A few people have even asked, “So you’re going around the country to wrap Bibles? Like at bookstores?” It’s a logical thing to assume when I say “I’m touring with Bible Raps this summer.”

The Bible Raps Project is a unique teaching tool that uses rap to engage students in Torah stories and Jewish values. It was founded by Matt Barr in 2007, when he found he could get his Hebrew school students excited about learning by rapping with them. Bible Raps has two main components: a song Toolkit and workshops. Matt created a Toolkit revolving around songs that he has written. (Listen to an example from an upcoming album. Each song has a “rap-map” showing how specific lines connect to passages in the Torah and midrashim (commentary). Hundreds of teachers currently use the Toolkit in their classrooms.

Bible Raps also travels around the world creating original raps with students of all ages. Students learn a few Jewish texts about a core topic and then split into groups to write. They then record their song, which is professionally mixed, and film an accompanying video.  In the end they can be proud of the work of art they created.  Students are able to take ownership of their history and pride in their community by rapping the words they have written.  I saw this model at work when I was a counselor at Camp Ramah Darom in Clayton, GA. In this video, it’s clear to see how excited these girls are. (I was there for the outdoor performance, it was awesome! )

As education coordinator on Hillel Board, I was able to bring Bible Raps to Brandeis for a weekend. They taught about the Toolkit, did some concerts, and then hosted a Brandeis workshop about Tu B’shvat, the “birthday” of the trees. We had so much fun writing and recording, and what we made is pretty awesome, if I do say so myself!  In the middle of it all, I went up to Matt and said, half-jokingly, “Do you need an intern this summer?” To my surprise, he said yes, and after a few months of emails and phone calls, here I am!

Last week I spent a few days at Matt’s home in Philadelphia. Bible Raps doesn’t have a physical office space, but we decided it would be productive to have some in-person training before we take off for the summer. I had no idea that so much goes in to this project: grant writing, managing contacts, fundraising, booking tours, as well as writing and recording, and I got a crash course in all of those things. I learned how to use a Tascam pocket recorder that will be on the road with us.

I also helped begin a “how-to” guide for running the workshop, which will be turned into a fully-fledged user’s manual over the summer.  My other responsibilities this summer include working on a fundraising campaign for the new album, helping with grant writing, and documenting the tour. In two weeks we head out on the road to our first stop at my old camp, Ramah Darom, where we’ll have a whole week of workshopping, performing, and writing. See you from the road!