Experiencing the Tony Awards, from the red carpet to the hottest after party at the Carlyle Hotel, was nothing less than absolutely fantastic! It always seemed like a distant dream to me and there I was, attending the same party as so many of my idols. Even though it was about a month ago, it’s still crazy to think that I was in the same room as celebrities such as Bette Midler, Olivia Wilde, Ben Platt, Sally Field, Anna Kendrick, Kevin Spacey, Darren Criss, Corey Cott, and about four hundred others. By the time I went to bed, I had been awake for over 20 hours but I didn’t even feel tired. I was very grateful for all of the adrenaline I was running on! That following week, the interns were kept very busy as we archived every mention of our shows from the Tony Awards on every news and media outlet, along with preparing for the opening night of “1984,” a new Broadway play based on George Orwell’s book adapted by Robert Icke and Duncan Macmillan. “1984” recently premiered on June 22nd, so there was very little time after the Tony Awards to get everything together. Much of our time was spent on picking up and preparing tickets and press lists for the following week.

At the beginning of July, I moved into an apartment only four blocks from my office, which has cut my 2 hour commute into 10 minutes! I love being so close to work because I’m not exhausted while there and can really focus on what I’m doing. I’m also able to see many shows on Broadway since I live so close which is how I love to spend my evenings.

Soon we will be preparing for the opening of Michael Moore’s new play, “The Terms of My Surrender.” I feel more prepared having already done work for the opening of “1984” and hope that I will be able to help even more than before. The summer is typically a very slow time for the Broadway world but we are lucky enough to be part of two shows that begin during the summer.

Working with DKC/O&M has solidified my desire to go into Arts Administration after college. Since we don’t offer courses around Arts Administration at Brandeis, I really didn’t know what it was or that it was even an option for me. I am very grateful for my internship because it is very difficult to truly learn what it is a press agent does in an academic setting. So much of the work is hands on and it’s great to be able to get that experience with DKC/O&M. Getting to see how different situations are handled first hand is invaluable. I love the environment I’m in, the people I’m working with, the work I’m doing, and the experiences I am lucky enough to have. If you find yourself interested in working in Arts Administration, my suggestion is that you apply for every internship you can get your hands on. The theater community, especially in New York, is so small and close knit that no matter where you end up, you’ll be connecting and working with people from all different areas of Arts Administration. You’ll make extremely valuable connections and it can’t hurt to try something different than what we’re always studying in school! 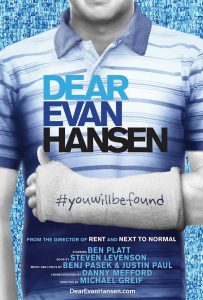