And that’s a wrap! As I type these words, I’m back on the beautiful Brandeis campus, having left NYC and said goodbye to Film Comment. Walking out on my last day (Monday), I felt a real sense of melancholy. I’m not being hyperbolic when I say the three months working for Film at Lincoln Center made up the best summer of my life.

But did I achieve my learning goals? Well, I’m not sure. I certainly learned a lot about the nuts-and-bolts of putting together a film publication. I made connections with a ton of people in the field I want to go into. I spent more time fighting with the Rotten Tomatoes website than I ever expected. But it’s not like after finishing this internship, I was immediately offered a paid gig as a film critic (not that that’s what I was expecting, but hey, it would’ve been nice).

Then again, I am headed right back to Lincoln Center in a few weeks. I recently secured press credentials to cover the New York Film Festival, which means I’ll be able to see two week’s worth of this fall’s hotly anticipated movies starting in mid-September. It’ll be my second year attending and writing about the festival, and I’m really looking forward to it! Of course, this is also a great opportunity to follow-up on all the connections I made this summer, and get coffee with my former bosses.

Also, on my last day, I was able to assist one of my bosses with writing the weekly news roundup. I can’t take credit for the whole article, but I wrote a bunch of the blurbs. Check it out!

I’m not sure there’s a specific thing I can point to this summer that I can say I’m most proud of – instead, some time around July I reached this kind-of New York flow that I’m really happy with. Juggling friends, an internship, a second job, and making time for my own writing was no easy feat, and I was a bit overwhelmed at the start of the summer. But by August, I was used to the revolving door my life had become. It’s a lifestyle I hope to continue at Brandeis.

In terms of advice for future interns or aspiring critics, I would say to be patient. Working at a place like Film Comment is like dipping your toes into a much bigger pond, and you can’t just jump into the deep end. For every day of archival monotony, there’s a day when you get a glimpse of an interesting upcoming article. Leaving this summer, I want to be a critic more than ever, and I feel like I have a better understanding of what that looks like on a day-to-day basis. I couldn’t ask for much more. 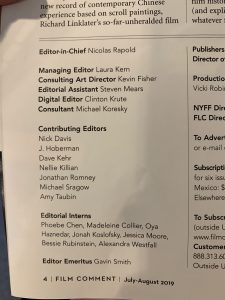 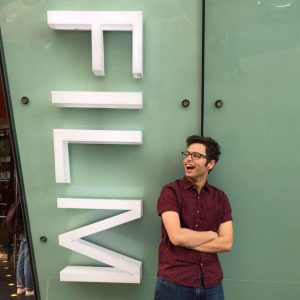