Moving from my hometown of seventeen years to Brandeis, over eight hundred miles away, was a source of anxiety coming into my freshman year. I felt conflicted about going from a place that I had known my whole life to an entirely new environment, but I knew it would be a source of limitless potential and new learning opportunities. I imagine many people have felt this way coming into their first year of college. I worried about meeting new people and slowly releasing the connections I had built at home. Established friends, teachers, and the like played significant roles in my life and, as for many people, acted as my support network.

Having a year under my belt now and reflecting on these unpredictable first two semesters, I found myself having many of the same fears and anxieties that I had then reoccurring today. I recently had a discussion with a close friend from Brandeis who shared these thoughts and feelings with me. While discussing making new connections and friends in the upcoming semester, they reminded me of how we met. They recalled how in the first meeting our economics class, I introduced myself to five or six people who were sitting around me, themself included. I had no memory of this occurrence and still struggle to remember anything like it happening. But from that point I had made the connection with them and, completely unknowingly, began what would evolve into an intimate and important friendship for me in my first semester.

In recalling this memory, I began to think of how difficult it has been to make connections and communicate extemporaneously in the remote environment we’re all working in. I believe it is fundamental that, in order to have a positive personal relationship with work, you must have positive relationships within the workplace, both professionally and personally. The barrier to entry in a new environment is especially low in a remote workplace. I’ve found that to be somewhat of a challenge, but fortunately the team I’m working with is a small, tight-knit bunch that communicates well. 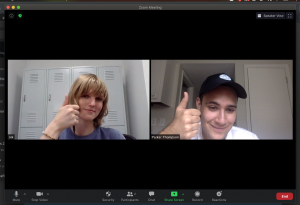 Despite this, I find myself lacking the sort of personal enrichment and fellowship that one develops in a working team. In the last few weeks, I’ve committed myself to applying the same approach I took in that first economics class. I have begun reaching out to my colleagues and engaging deeper with them through friendly and personal discussions. I’ve found that we share similar hobbies and passions, but especially, due to the nature of our work, we think about similar issues. This experience has been a reminder to me that developing new relationships takes only a first step, even in a remote environment. While not all attempts will blossom into a fruitful friendship, at the very least I will have reached out to another person, which is an experience I believe we can all benefit from, especially in this unique time. 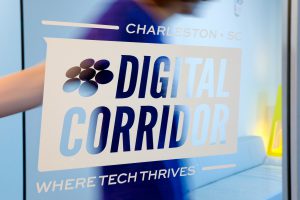 This summer I have the privilege of working with the Charleston Digital Corridor (CDC) in Charleston, SC. The CDC is focused on advancing Charleston’s tech economy as well as creating opportunities for a diverse set of entrepreneurs in the region. I was born and raised in South Carolina and have lived in Charleston for the bulk of my life. I’m incredibly passionate about advancement here in the south and the CDC has been an integral part my city and state becoming a thriving tech hub. The CDC’s unwavering commitment to the region is in large part why I chose a fellowship with the organization.

I have the unique opportunity of guiding and structuring the majority of my day-to-day work. The central goal of my fellowship is to fully develop and launch a non-profit organization before the end of the summer. Over the last four weeks, my time has mostly been occupied with research and phone calls. My research has largely focused on the racial and gender disparities in the tech industry, especially as they pertain to computer science. While I have always maintained a consciousness of the overall lack of diversity in tech, never has the issue seemed so apparent to me than now.

For example, white and Asian men dominate the computer science (CS) field and make up more than 82% of CS undergraduate degree recipients. This reflects glaringly in the working pool where women make up only 26% of all tech sector employees, and Black and Latino employees make up less than 15% combined. These numbers pushed me to look deeper into the root cause of these disparities, where I found that, despite having a greater interest in CS than white students, Black and Latino students are restricted by a lack of access to resources.

The case for women tells a different story. Myths about STEM pipelines and inherent interest have often pervaded the narrative. However, unconscious bias, not pipeline issues or personal choices, push women out of STEM and contribute to a pattern of discouragement. For instance, almost two thirds of women in STEM with children say their commitment and competence were questioned and opportunities decreased, especially after having children.

In an effort to further reinforce these stories, I’ve spoken with a diverse range of entrepreneurs, programmers, and engineers about their experiences in tech. These conversations have been personally enriching and deeply insightful, and I hope to share these as I move forward this summer. This period of learning and reflection has been integral to understanding just some of the issues preventing the diversification of the tech sector.

I aim to move towards tackling these issues in the coming weeks and months, and sharing the knowledge and ideas I develop along the way.