I am imminently feeling the speed of time here in Israel working at Project Harmony. Each day begins early, at 6:40 AM. The commute is over a half hour on a bus that never comes when it says it will (this can mean up to a half hour early, or over an hour late). Because of this chaos I arrive very early and often spend a lot of my time waiting for the bus; as I wait, though, I have time to be present at my stop across from the downtown shuk (market) or to reflect on my experiences here in Israel.

Some of the things I think about are how:
This place is a beautiful mess (which fits with my internship and role as an Art’s Specialist at Project Harmony Israel). Time is a suggestion here, food is a priority, and there is no consistency. Some days I have 40 kids to look after, and others I have 12. Most of the children who behaved the day prior will be ill behaved the next. Nothing is for certain here, and I have come to love that more and more each day. At first I was so troubled by feeling out of control, but living and working here has taught me that being out of control does not mean that what I am doing or working towards isn’t meaningful or effective, it’s just dysfunctional along the way. I think this is an invaluable lesson that is applicable in my personal, academic, and occupation-related life.

I have learned part of this lesson from the various children I work with, and with whom I spend upwards of five hours a day. The children at Project Harmony Israel are rambunctious, and culturally dramatically different from the American children I have worked with in the past. I feel myself living out cross-cultural encounters like the ones I read about in my Anthropology classes, but I also find myself witnessing them. For instance, in one conversation I was explaining a project very slowly in English to a young Jewish girl who then turned to her friend and translated everything I had just said into Arabic. Moments like these, where I feel like the children teach each other, are the most special and meaningful part of this experience working here. My approach towards cross-cultural understanding was fostered academically at Brandeis in my Anthropology classes, but my approach and application has been tested and developed by these specific instances and interactions.

“All curricula are tailored to meet individual developmental, behavioral and linguistic needs, and couched in the principles of universal youth development. We believe that by creating a safe integrated space for children to share experiences, our campers are able to build organic, lasting relationships–on their own terms.

In order to achieve these programmatic goals we offer a wide variety of daily activities, including fine arts, music, athletics, team building, community gardening, American Sign Language, and English games. We go on weekly field trips and also host guest teachers to lead week-long workshops. Every summer we also host a community event in which we invite families, friends and community members to join us in celebrating our campers’ remarkable achievements.”

I’m still getting used to the commute and the work environment in Israel; it is all very casual. A number of times I have been sure that I have strict deadlines and then things end up being very flexible; the timeline here is entirely different here and the friendliness and collaborative work environment only adds to that feeling of accommodation and appropriate informality.

Most of my time has been spent developing a lesson plan. As an arts specialist I have been trying to think of the best ways to combine the efforts of normalization in a way that brings meaning to the fact that there are people engaged in this project and camp who come from such varying narratives. I’ve primarily been developing a portrait unit directed towards the goal of seeing and experiencing one another as full people. In my lesson plan I have considered comparing fast-paced portraiture as well as longer sessions wherein which two people take turns doing portraits of each other. The goal of this is to really get to know the faces and the (visual) experience of another person in a very personal way. As a supplemental component of the unit I hope for campers to conduct short interviews with the person they are drawing and to then use one phrase or quote from that interview as the title for the portrait or as an accompanying linguistic element to the visual experience of the portraits. I feel like there is something very inspiring about taking the time with another to notice the details of their being.

I have yet to work directly with other staff members, as they arrive on Sunday and we enter formal training for one week together prior to the camp’s start. I can’t wait to get to know those other staff members and experience this with them. So much more is in store! Meanwhile, here’s some photos of the space I’m working in at the Max Rayne Hand in Hand School in Jerusalem. 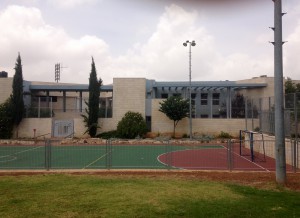 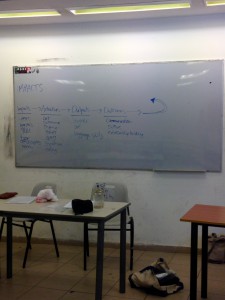 Second photo: A communal staff brainstorm on the process of how to have the greatest impacts on campers