I ended my internship at the Eugene O’Neill Theater Center about two weeks ago. Since then, I’ve had plenty of time to reflect on what I’ve learned about myself as a student, artist, and collaborator. I have a clearer idea of what I am capable of doing and what I actually want to do in the theater industry. For example, this internship reaffirmed my interest in directing and confirmed that I am not interested in acting. But it also made me think more seriously about theater administration, dramaturgy, producing, and theater education as possible career paths. My experience at the O’Neill taught me that, if I continue to work hard and educate myself, I’m capable of more than I originally thought.

For the immediate future, I know I will use the skills I’ve learned here to improve my work at Brandeis. The deeper understanding I’ve gained about the structure of musicals and plays will inform how I direct my thesis production this fall. I will also use my knowledge of professional theater productions to enhance my classwork. The administration skills I gained will affect my work as an Undergraduate Departmental Representative and Senior Interviewer in the Office of Admissions. Once I graduate, I am considering returning to the O’Neill as a worker or student. I also will be in contact with the friends and professional connects I made this summer. They are not only great resources for future work, but also help me keep up with what theater is going on across the country.

I would recommend my internship to anyone who is seriously considering a career in the theater industry, specifically those who are interested in the development of new work. The O’Neill looks for people who are hard working, self-starters, and kindhearted. The O’Neill is located in a small town away from other theaters. Many of the workers live on campus. The staff and interns get to know each other and are all an integral part of what makes the theater run. They must be willing to put in the work to make things go smoothly while simultaneously sustaining a positive working and living environment.

Experiencing what the day-to-day workplace was like in such a competitive and fast-paced industry was reassuring. It can certainly be stressful and exhausting, but with the right support, it is an absolutely inspiring place to be. The works of theater kept me excited about going to work—even at 8 AM, even after a 14-hour workday. I realized that my experiences at Brandeis prepared me to take on long days with many tasks. I am most proud of my ability to focus and to know the appropriate times to speak up or step back. The most valuable thing I learned this summer, however, is that I am excited to get into the working world, not scared. It has reassured me that I can find a place in the theater community and that I am ready to get to work. 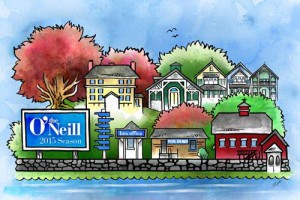 Greetings from Waterford, Connecticut! I just finished my second week interning for the Eugene O’Neill Theater Center as an Artistic Director’s Assistant. The O’Neill welcomes more than five different artistic directors to the grounds each summer to help develop new works of theater. Although many regional theaters across the country are now investing in emerging artists and plays, the O’Neill was the first theater to revolutionize the development process 51 years ago. Since then, the O’Neill has cultivated five different summer conferences as well as academic programs. Many of the pieces developed at the O’Neill have gone on to be extremely successful, such as Avenue Q, Violet, [Title of Show], The Wild Party, Fences, Piano Lesson, Uncommon Women and Others, In the Heights, and more. This summer, I have the privilege of working on the National Puppetry Conference, National Music Theater Conference, and Cabaret and Performance Conference.

I just wrapped up working on the National Puppetry Conference. During that time, I did administrative tasks, archival work, and was able to attend master classes taught by some of the most successful puppet professionals from around the world. For example, I participated in a three-day character creation class with Leslie Carrara-Rudolph, the voice of Abby Cadabby on Sesame Street. During the day, I worked closely with the artistic director of the conference as well as the associate artistic director and other staff members. I came in knowing nothing about puppetry and learned more than I thought possible. These first two weeks have already transformed how I think about both the artistic and producing aspects of theater.

My primary career interest is directing, and the O’Neill provides the perfect environment for me to work with professional directors and artistic directors. The next conference I am working on is the National Music Theater Conference, which will give me the opportunity to sit in on rehearsals. One of my tasks is to observe meetings with professional artists and keep track of changes made to the productions. This will allow me to gain a deeper knowledge of the practical and experiential aspects of the artistic process. One of my jobs will be to record and transcribe meetings between the writers of the new musicals and established artists brought in to critique their work. This will give me insight as to how to balance business and art and how to edit work with a specific audience in mind.

At the O’Neill, I am learning how to navigate different challenges that arise when working in a fast paced and demanding career while receiving the mentorship of professional artists. Although I’ve only been at the O’Neill for two weeks, I feel as if I’ve lived here for much longer. Everyone is so welcoming and supportive. It is so exciting to be in an environment where everyone is 100% dedicated to making good theater. I am beyond excited to kick off the Music Theater Conference this week with a reading on Slaughterhouse-Five the musical. If you’re in the area and interested in seeing any of the productions, check out the O’Neill website for more information.