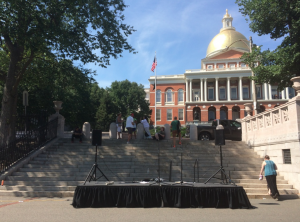 Over the course of the past few months, there has been much to reflect on and respond to as an organization that works to foster more just and peaceful U.S. foreign and domestic policy. Recently, the shibboleths of both major political parties in the U.S. have come under intense scrutiny and there have been efforts from both the left and right to reshape society as we know it. In the height of this political tension and discord, the summer has also been plagued by rampant gun violence and mass killings, the continuing hatred facing the LGBT+ community, police brutality in minority communities facing unemployment, poor schools and crumbling infrastructure, and today’s wars and nuclear weapons buildup, all symptoms of violence closely tied with racism.

Though all of us at Massachusetts Peace Action are working very hard to reverse these scornful trends, it often feels like our efforts are futile. But on one particularly crestfallen morning in the office, it was a conversation with one of our volunteers that changed my perspective of the movement entirely. “Responding to my qualms,” she said, “Whenever I feel doubtful about how much of a change we are actually making, I try to imagine a world without the peace movement and that keeps me going.” For the first time in my experience working with MAPA, I felt that I was being selfish. I realized that in the face of this collective struggle, progress is not measured by the actions of one person and we must maintain faith in the process in order to achieve social righteousness for all no matter how long it takes.

Keeping this concept in mind, in addition to my daily in-office responsibilities, much of the work that I have been engaged in has been community outreach. For example, I participated in tabling and petition gathering at the Cambridge River Festival, the Lowell Folk Festival, and at our Distinguished Peacebuilders Series, which has featured speakers like Michael Dukakis, Noam Chomsky, and Helen Caldicott.

In addition, I have been actively involved in planning our first annual folk/acoustic music series as well as one of our major summer events to commemorate the atomic attacks on Hiroshima and Nagasaki, which took place respectively on August 6th and 9th, 1945, and the 2nd anniversary of the death of Michael Brown. We are broadening the focus of our event this year to call attention to racialized police violence and gun violence in light of the tragic events that have transpired over the past few years (Ferguson, Orlando, Baton Rouge, Dallas, etc.) and I invite everyone who is around to attend! Lastly, I have been an active participant in our Legislative and Nuclear Disarmament working groups to structure our new economic and disarmament campaigns.

I look forward to the remaining weeks of my internship and hope that I can continue to spend my time advancing MAPA’s mission of inclusion and social justice.

This summer I am working as a Legislative Intern for Massachusetts Peace Action (MAPA), a nonpartisan, nonprofit organization working to develop the sustained political power to foster a more just and peaceful U.S. foreign policy. Massachusetts Peace Action is an affiliate of Peace Action, the largest grassroots peace and disarmament membership organization in the U.S., with some 100 chapters nationwide. Through grassroots organizing, policy advocacy, and community education, we promote human rights and global cooperation, seek an end to war and the spread of nuclear weapons, and support budget priorities that redirect excessive military spending to meeting human and environmental needs in our communities.

My experience with this organization began in late May when I attended the Peace Action National Organizers Conference and Lobby Day in Washington D.C.. During the first two days, representatives from Peace Action chapters from around the country (California, Massachusetts, Vermont, Maine, New York, Florida, Ohio, etc.) met and discussed foreign policy and the role of the national Peace Action organization in the affairs of the affiliates. Some of the policy topics that we covered were the Syrian War, nuclear disarmament, the People’s Budget, Saudi Arabia/ Yemen conflict, and climate justice. It was fascinating to not only hear the perspectives of progressive leaders from around the country on these issues but also to learn about the framework of the organization and non-profit work in general. There were also several student chapters represented including Syracuse U., Tufts U., Harvard U., Hofstra U., and several state colleges from New York. It was helpful to engage in political discussion and form alliances with other students who share a similar vision.

On the final day of the trip, along with other delegates from the Massachusetts Peace Action, I participated in lobby meetings with all of the eleven Massachusetts federal legislators or their staff. It was such an amazing experience to travel between the Senate and House offices on Capitol Hill and actually speak with the individuals who develop policy and represent large populations of Massachusetts residents. Often times it seems that officials in Washington are alienated from the public so it was interesting to get some insider knowledge of the legislative processes of the federal government and other congressional procedures.

Since my return from Washington D.C., I have been working in the MAPA headquarters in Harvard Square (Cambridge, MA) and have been involved in a wide range of tasks including fundraising, community outreach, event planning, and legislative affairs.

I am really looking forward to the rest of the summer and hope that I will be able to continue strengthening my network by building friendships and alliances with those that I meet along the way.