The North American Indian Center of Boston has had many names and many directives, but it has always kept its central mission of empowering the Native American community to achieve a higher quality of life for themselves and for Indian Country as a whole.

Forty-nine years ago, NAICOB strived for its socially just means under the name of the Boston Indian Council. For many years, it served as the headquarters for indigenous and civil rights activism. Now, it has morphed from social action to social service. Although social services do not have the bravado, the crowds, and the publicity that comes with marching-the-streets action, they still serve as an integral component of social justice. The advantage and most important quality NAICOB’s new strategy possesses is its ability to reach out to the community on an individual level and build it up incrementally, one person at a time.

Ironically, serving the individual rather than reaching for broad goals eventually brings the whole together stronger than before. Rather than asking the community to risk their already tenuous resources to support the outcome of a large goal (law amendments, major protests, etc.) NAICOB asks the community what they need during their day-to-day lives. Once those questions are answered, they amass resources to support those in need and eventually become a central component of empowering the indigenous community. For example, a common issue they found was that many native families were unable to afford backpacks and toys for their children for school and the holidays, so they partnered with Toys for Tots. After much success, toy and backpack drives became permanent parts of NAICOB operations.

However, this type of service only goes so far. In order to lift the Native American community out of the need for these immediate use programs, deeper issues must be faced. One such issue is the Native American unemployment crisis, wherein over 8.9% of American Indians and Alaskan Natives are jobless, compared to 4.9% rate for the rest of the country (Hagan, 2018). To combat this issue for the local natives, NAICOB has built a coalition with WIOA (Workplace Innovation and Opportunity Act) where individuals can access a wealth of employment resources, training, and cultural support in gaining new employment that will fit their needs.

The social justice that NAICOB strives for goes for impacting lives on a more personal level by bringing people new opportunities and ways to educate themselves.  By employing and educating the community, they can stand together and empower themselves to make larger strides towards indigenous rights goals.

Social justice and the values that naturally accompany it were rarely on my mind before I came to the Brandeis campus. I thought that being giving and kind in my own life was enough to help make this world a more just and peaceful place. However, Brandeis has removed the white privileged wool over my eyes and showed me the various ways I was complicit in the oppressive structures upon which my world rested. It was a difficult transition realizing that good intentions were not enough. Having to check myself for my unconscious biases and confront the guilt that came with the epiphany of my willing ignorance was overwhelming, but it also lit a flame under me. I was led to advocacy, activism, and for the first time I felt that I could actually be a part of a lasting solution.

Working at the North American Indian Center of Boston this summer forced me through another reexamination of my privilege in terms of becoming an ally. My desire to become a part of the solution and to right the wrongs of my ancestors was met with a wall formed by generations of built up distrust. Humbling as it was, this experienced awakened me to the unforgiving opposition this organization and the whole of Indian Country faced. After colonial wars, slavery, assimilation camps, broken treaties, and marches to ever-shrinking reservations, over five hundred Native American tribes have still survived but at a heavy cost.

The result of our colonialist history has led the Native American community into another losing battle against a government and people who think very little of the struggle they face.  After over hundreds of years of resources, land, and cultural identity being ripped away from the tribes, they have been forcibly reliant on government assistance. In the new administration, for example, NAICOB has to fight against other Native American tribes and non-profit organizations for the same money to provide support for their communities. Under this new structure, tribes can no longer sustain themselves in the manner they had before the colonization of the Americas by European settlers. The sovereignty of which Native American communities have full claim is hollow to the government that implicitly controls them.

It was difficult to observe the heartbreaking history and current struggles my coworkers at NAICOB and their communities had to live with. At times I wondered if my existence working with them was an extension of the colonial perpetrators, infiltrating my way into the Native American community as some sort of white savior. However, I recognized there was a balance. I could be a part of the solution, not by preaching, but by listening, absorbing the stories, and setting fire to the neutral ignorance in my community. I can bring back all of my experiences to Brandeis and share with my fellow students so as we move forward with social justice we can be more aware of our place and our role in creating a better future for us all.

This summer I have embarked on my internship experience at the North American Indian Center of Boston. As the oldest urban Native American center in Massachusetts, NAICOB exists to empower the diverse indigenous community here through social services and community events. So far, I have been assigned three major responsibilities: receptionist, office assistant, and researcher. My station as office intern and receptionist has gifted me the greatest insight into the inner workings of a non-profit organization and just how much effort it takes to run. It also enabled me to add my own creative contribution to many of the initiatives NAICOB strives to accomplish. 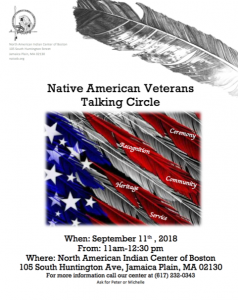 The first order of business is building up the local Native Americans Veterans community.  On September 11 we are inviting all Native American Veterans and first responders to the center to join in a “talking circle” in order to foster connections to community, services, and networking opportunities. This week, I finished designing a flyer for the event and will assist in reaching out to as many Native veterans we can find.

Many other projects come across my desk, namely an ongoing research project for the Boston Public Schools.  Every day I uncover videos, articles, books, movies, and other materials that can be utilized to build a well-rounded Native American history curriculum for the students of the Greater Boston Area.  This will allow future generations to learn about indigenous history as it truly is: a vibrant culture with a sorrowful past, yet resilient and very much alive. 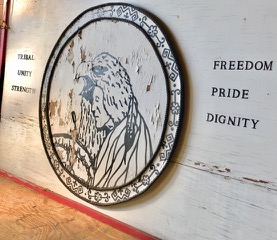 Through only a few weeks working here, I have come to realize just how important the existence of a center such as this is to the local indigenous community. Invisibility and marginality within the United States is one of the defining obstacles NAICOB and the tribes it represents face.  This struggle is even more palpable in Boston, a city that prides itself as the birthplace of its nation. Yet, it rarely recognizes what it took away to become the thriving country it is today.

For the rest of my time here, I am determined to be a part of the efforts to educate the public about history through the indigenous lens, to reconcile my part in the marginalization of indigenous folk, and to earn the privilege of becoming an informed ally in the quest to remind the world that Native Americans do not exist in the past tense.