My personal goal for this internship was to deepen my understanding of the struggle for racial justice in the United States, which I have achieved. During my internship, I conducted in-depth research on several important events in the Civil Rights Movement, such as the Freedom Rides, Nashville Student Movement, and the March on Washington. When I looked at the pictures of the Freedom Riders being beaten by the white supremacists, I not only learned history, but also sympathized with the Riders. In the meantime, I found that history is always repeating itself. Recently during the pandemic, Asian Americans were randomly attacked on the street — like the Freedom Riders, they did nothing but were beaten because they had the “wrong” skin color in society.

My academic goal, enhancing my understanding of the Cold War, was also fulfilled by researching the international influence of the Civil Rights Movement. I conducted research on China in order to find how the Chinese government published the Civil Rights Movement. I also discovered that Chairman Mao, the most influential figure in early China, once met with civil rights leader Robert F. Williams and offered his support for the Movement. Through the encounter of this special relationship between Chinese government and the Movement, I also learned international relations from a unique perspective. In terms of my career goal, this internship overall helped me comprehend American history more deeply, and how legislative changes were made under the pressure of civil rights movements; although my research actually reveals how slow legislative changes could be. 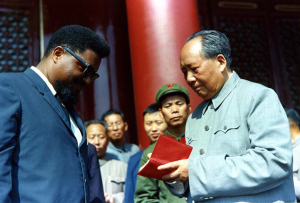 For students who would like to apply for a research assistant internship, particularly in humanities, the first thing is to learn basic research skills. Those skills could be how to use Brandeis OneSearch, using the Brandeis library database to search for useful websites, how to get access to the books in the library, or how to submit a request for a book that is not possessed by Brandeis library. Although your UWS instructors have taught you that, it is important to remember those seemingly “useless” skills. Next, you should be familiar with the basic search engines on each website; they all look familiar and have the same techniques. You should grasp the key words of your question and find other specific information about the topic that could limit the search. For example, when I am looking for primary sources for a historical event, I often frame the publishing date to several years around the time of the event. What is more, being a research assistant requires people to be meticulous. Attention to detail is necessary for many jobs, so it will not harm if you start to train yourself to be meticulous; watch every word, every space, every punctuation in your writing and be used to double-check carefully.

Working remotely requires a more efficient and straightforward way of communication which I have acquired during the first week of my internship. Because I only report to one supervisor, who also has other research projects going on and other assistants to supervise, sometimes he cannot respond to my messages immediately. In order to avoid wasting time waiting for him to tell me the next task, I always let him know about 15 to 30 minutes in advance before I finish my current task. In this case, my supervisor will have time to arrange my next task. If I feel that the current task will take more time than usual to finish, I will also let him know about my progress.

Although some people find working from home really comfortable, I think a remote internship is actually more exhausted both physically and mentally. Although this internship is my first remote job, this is not my first time working with a laptop during 90% of the working hours. Sitting in a chair for at least 5 hours a day makes my back ache, and I had to go to a chiropractor for treatment. What is more, I am not fond of video chatting and zoom meetings — I prefer in-person conversation. At first, it was a little depressing for me to stay in front of my laptop all day and barely talk to anyone in person. Then, I quickly adjusted myself with regular grocery-shopping and in-door dining, conforming with COVID regulations.

Despite the fact that many research assistant jobs are very similar to the research we do when writing a research paper, there are some notable differences between a research job and schoolwork. All of the research papers I have written have word limits, but my current job on researching the Freedom Rides does not have a “limit.” I need to dig into the historical event as detailed as possible.

My academic life has not been vacant for the summer. As an international student, I must take INT 92G (Summer Internship) in order to be legally working off-campus. The course requires all students to complete a number of tasks to get credit. At the first glance, taking an “internship” class during the summer would seem boring and exhausting, but I found some of the readings really helpful, especially in coping with remote work. An article from the New York Times, Struggling to Disconnect from Our Digital Lives, offers a great perspective on how to deal with being dominant with electronic devices and online work. As working from home has been gradually considered into many companies’ long-term policies, this internship could help me adapt to the new work style and be ready for the uncertain working styles in the future.

As I mentioned in the previous post, I conduct research on the Civil Rights Movement and the life of Congressman John Lewis. Beyond the American history knowledge I learn from this internship, I also realize the present significance of the Movement and better comprehend the struggle of African-Americans. 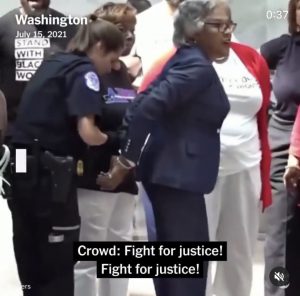 When the New York Times reported that the Chairwoman of the Congressional Black Caucus was arrested on Friday for protesting against the languishing of John Lewis Voting Rights Act, I felt that I was not reading a piece of news, but witnessing the effort that present activists spend to continue fighting for the systematic inequality that I have spent time researching. Learning and researching historical events is not only a skill but also a way of gaining another perspective to comprehend American politics and present-day racial struggle in the country, which could be helpful for my future career in the legal field. 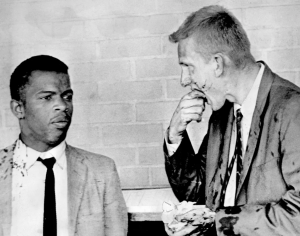