My internship has begun at Orchard Cove, an independent living and enhanced living retirement community. Orchard Cove is part of the Hebrew Senior Life network. Orchard Cove empowers seniors to live healthy independent lives and honors the aim of the Massachusetts Coalition for Serious Illness Care to ensure that “delivery of care is aligned with values and preferences at all stages of life and all points of care”.

At Orchard Cove, my internship involves working for The Vitalize 360 Program, a platform through which Vitalize coaches “elicit and document residents goals, values and preferences.” The way the program works is that a vitalize 360 coach meets with a resident twice to discuss the resident’s wellness, health, and quality of life. The coach helps the resident to set goals and then create an action plan, or vitality plan, to assist the resident in accomplishing his or her goals and pursue what matters most in their lives.

In first arriving at Orchard Cove, I was impressed by the beautiful facilities and friendly atmosphere. During my first week, my supervisor brought me to almost all of her meetings so I could get a grasp of what Vitalize 360 is all about and meet the Interdisciplinary Team members, all of whom support the best lives of the residents at Orchard Cove. 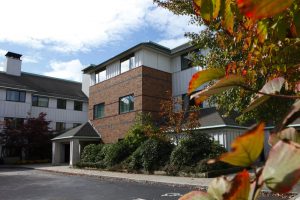 The first meeting I attended was on the topic of “What Matters Most.” What matters most (WMM) is a philosophy on which Vitalize 360 and Orchard Cove are built. It emphasizes the idea that residents should define what matters most to themselves and have conversations with their loved ones.

During our time together, the team reflected on the Second Annual Coalition Summit which included research presentations from Massachusetts Coalition for Serious Illness Care as well as personal experiences. The team discussed their thoughts on the conference and also talked about how it related to the idea of “What Matters Most.” A major aspect of the Coalition and Vitalize 360 is for individuals to get on their own personalized path to “What Matters Most.” With the goal of finding what matters most, individuals define their specific values and preferences, make sure those preferences are clear to loved ones, and create a health care proxy.

With another team member, I began brainstorming an art project for the kickoff WMM event Orchard Cove will be holding in June. I have also begun to support the team by helping to develop a “What Matters Most” tool box that will be used to support residents to articulate and capture what really matters in their lives.

Additionally, I have also supported the team by taking the lead on  administrative tasks, such as creating folders that contain important surveys and questionnaires used during Vitalize 360 evaluations with residents. I had the opportunity to sit in on a resident evaluation with my supervisor and vitalize 360 coach which provided a helpful perspective. My supervisor asked the resident questions about her life and interests. With help from the coach, the resident was able to determine what matters most to her, and create goals for herself to achieve what matters most. This plan is called a vitalize plan.

Vitalize 360 logo used on most documents for the program.

I also sat in on two meetings related to Vitalize 360 both led by my supervisor. At one meeting, my supervisor trained other staff members to become vitalize 360 coaches and at the other meeting, we discussed different residents and how the team can best support their vitalize plans. I was also able to learn how the Vitalize 360 online software works. In addition, I have done a lot of research on Vitalize 360 and other resources out there for seniors. I also had a chance to sit in on a laughter class led by one of the residents.

I am looking forward to really delving into the Vitalize 360 and What Matters Most Projects, work directly with residents, and see how the interdisciplinary team works to support the residents.