I have been working at the Alzheimer’s Association for a couple of months now, and I have learned that work comes in waves. Some days, I am stuffing packets and calling churches from the second I get there to the second I leave, and other days, there is a lull in the office. As I mentioned in my first post, I am working at the Watertown office, which is the headquarters for all operations in Massachusetts and New Hampshire. This means that although the office is huge, it can feel really empty when people are out and about all over Massachusetts and New Hampshire.

A huge part of what I am doing this summer is outreach. During the past couple of months, I have really gotten a feel for what that word really means. In my case, working with the Hispanic/Latino population in the Boston area, it means calling churches to send informational packets and set up education programs, training volunteers in the community to educate their congregations about Alzheimer’s disease, and generally getting the word out about all of the resources offered by the Association.

I think the most valuable thing I have learned so far about outreach though, is that information alone is not enough; it really has to be put in cultural context. Most of the people I’ve been working with are either immigrants to the United States, or children of immigrants from Latin American countries. The way that they experience and understand disease can be different from my own. In the case of Alzheimer’s disease, many Latin American countries have considered the symptoms associated with Alzheimer’s (such as memory loss and confusion) to be a normal part of aging, and the medicalization of Alzheimer’s is just beginning to reach some parts of the world.

So we can’t just go into communities and say “hey, there’s something wrong with you!” which could incite fear and mistrust. There is already a pretty widespread aversion among the Latino/Hispanic community to drugs and other resources related to Alzheimer’s disease; which is understandable considering some people don’t even believe that AD is real. This is why cultural competency is so important in medicine. There are small steps that can be taken in terms of outreach to mediate this transition and make the process of diagnosis and treatment of symptoms much less stressful for everyone. These steps include things such as involving family members in decision-making, having professional translators trained in more than one dialect, and focusing outreach efforts on researching different customs and practices. Most importantly, we can find out what people want by actually asking them.

At this mid-way point in my internship, I think the most important lesson I have learned is this: outreach means more than just sitting at a table handing out packets – it means tailoring discussions to the communities you’re working with and learning from within the community; after all, they know their needs. I’m looking forward to continuing with this work and also continuing research for my upcoming thesis.

Working in the hospital for the last four weeks has been an incredibly fulfilling and engaging experience. Additionally this experience has illuminated the underpinnings of a foreign health care system first hand. From 7am-12p.m I assist the nurses, doctors, and patients to  the best of my ability in order to help the day run easier and quicker. The medical culture in Quito is quite different than that of the States- there is a much more relaxed and calm aura, even in the emergency rooms, female doctors and nurses spend full days in heels, and there is often many patients in a consultation room. Beyond these small observations, however, the desire to improve and get up to speed with western medicine is evident and exciting to watch. All of the doctors and nurses I have assisted have been warm, inviting-and love explaining everything they do in a way that I can understand. Life in Quito has also been very interesting. Ecuadorian culture has been wonderful to be a part of and observe-as it is heavily tied to family, Catholicism, and salsa dancing which serve as channels to meet locals. The history of Quito and Ecuador as a whole is also fascinating and the more I learn, the more I have come to understand the evolution and reasonings of the health care system here. 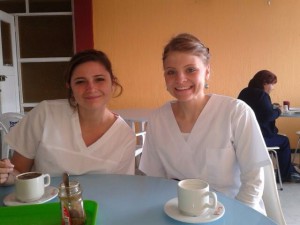 I have also had the chance to connect with many volunteers in the hospital from around the world. It has been really interesting to hear about their countries’ healthcare system in contrast to that of Ecuador. Given the opportunity to converse with healthcare professionals and learn hands-on has been an experience completely different from studying at Brandeis. I have gained many medical skills such as taking blood, stitching, and taking vital signs which are skills that I would not attain until later in medical school. I have also learned that 80% of Ecuadorians use the universal healthcare system, which is supplied by the government. Unfortunately, there are not enough hospitals to support the demand. Consequently, often the hospital I work at and others in Ecuador tend to be in hysteria, with as many people jammed into the waiting rooms as possible. A great article that discusses these issues can be found here. As the United States moves toward universal healthcare, I think it will be important to recognize the weaknesses of other universal healthcare plans to know how to structure and improve it. If you are interested in a quick synopsis of the healthcare system in Ecuador, PubMed does a great job.

A skill that I have gained and am continuing to work on is my ability to communicate in Spanish to the patients, doctors, and other healthcare professionals. More than becoming well versed in Spanish medical terminology, I have been more confident in approaching doctors and nurses and asking them about their experience and what they do. Finding the confidence to follow my curiosity in a very different culture is something that I was afraid I would be unable to do. I look forward to continue pursuing my curiosity academically, as a future healthcare professional, and as a visitor in a foreign country.