“In all kingdoms of life, gene transcription is not carried out by RNA polymerase enzymes alone.” Instead, accessory proteins ride along with RNA polymerase molecules as the latter move along a gene, regulating their biological function and controlling gene expression. However, in no cases is the kinetic mechanism of such elongation regulation quantitatively understood.

Sigma proteins are known to be regulators of bacterial transcription initiation. However, previous work suggested that σ70 is present on some transcription elongation complexes, although the extent to which it is retained from initiation, how long it remains attached, and its consequences for transcription regulation were unclear. In this study, Tim Harden and his collaborators used a novel multi-wavelength single-molecule fluorescence microscopy approach to directly observe and quantitatively characterize the dynamic interactions of the σ70 protein with bacterial RNA polymerase molecules in vitro during active RNA synthesis. Harden is a Brandeis Physics Ph.D. student who is jointly advised by Jeff Gelles and Jane Kondev.  The study demonstrates by direct observation that actively elongating polymerase molecules can retain σ70 from initiation into the elongation phase of transcription; shows that retained σ70 subunits dissociate so slowly that most are still present on the elongation complex at the end of a long gene; and proves that only the subpopulation of elongating polymerases with bound σ70 recognize a class of transcriptional pause sequences which in some contexts play a well-established role in regulating gene expression.

More generally, this study provides the first quantitative framework that defines the post-initiation roles of σ70, information that is essential to the understanding of global transcription regulation in bacteria. Furthermore, the work demonstrates a general method for elucidating the dynamic interactions of transcription factors with active elongation complexes; this method has broad application in both prokaryotic and eukaryotic transcription biology.

Resources: Plasmids described in this article are available from Addgene.

Regulation of actin filament length is a central process by which eukaryotic cells control the shape, architecture, and dynamics of their actin networks. This regulation plays a fundamental role in cell motility, morphogenesis, and a host of processes specific to particular cell types. This paper by recently graduated Ph.D. student Jeffrey Bombardier and collaborators resolves the long-standing mystery of how formins and capping protein work in concert and antagonistically to control actin filament length. Bombardier used the CoSMoS multi-wavelength single-molecule fluorescence microscopy technique to to discover and characterize a novel tripartite complex formed by a formin, capping protein, and the actin filament barbed end. Quantitative analysis of the kinetic mechanism showed that this complex is the essential intermediate and decision point in converting a growing formin-bound filament into a static capping protein-bound filament, and the reverse. Interestingly, the authors show that “mDia1 displaced from the barbed end by CP can randomly slide along the filament and later return to the barbed end to re-form the complex.” The results define the essential features of the molecular mechanism of filament length regulation by formin and capping protein; this mechanism predicts several new ways by which cells are likely to couple upstream regulatory inputs to filament length control.
10.1038/NCOMMS9707
Single-molecule visualization of a formin-capping protein ‘decision complex’ at the actin filament barbed end
Jeffrey P. Bombardier, Julian A. Eskin, Richa Jaiswal, Ivan R. Corrêa, Jr., Ming-Qun Xu, Bruce L. Goode, and Jeff Gelles
Nature Communications  6:8707 (2015)

Resources: The capping protein expression plasmid described in this article is available from Addgene.

Readers interested in this subject should also see a related article by Shekhar et al published simultaneously in the same journal.  We are grateful to the authors of that article for coordinating submission so that the two articles were published together. 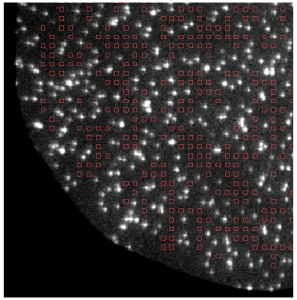 In single-molecule colocalization (“CoSMoS”) experiments, “the most challenging aspects of the technique are often not the preparation of the molecules or making the microscope observations, but in analyzing the resulting data. Data analysis has two primary challenges. First, one is studying inherently stochastic processes (thermally driven reactions of single molecules), so that analysis is inherently statistical. Second, the number of photons that can be emitted by a single fluorophore is limited by photobleaching, so images often have low signal-to-noise ratios, making discrimination of real signals from noise a challenge.”  In this article, Larry Friedman provides a step-by-step description the the procedures he has developed to reliably and efficiently analyze CoSMoS data.  While the examples discussed in the paper focus on analysis of transcription mechanisms, the methods should be applicable to CoSMoS studies on a broad range of biological systems.

Resources: Computer software that implements methods described in this article is available here. 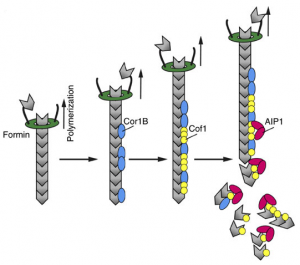 “The mechanisms by which cells destabilize and rapidly disassemble filamentous actin networks have remained elusive; however, Coronin, Cofilin and AIP1 have been implicated in this process.”   Silvia Jansen from Bruce Goode’s lab and co-authors showed in this study “using multi-wavelength single-molecule fluorescence imaging…that mammalian Cor1B, Cof1 and AIP1 work in concert through a temporally ordered pathway to induce highly efficient severing and disassembly of actin filaments. Cor1B binds to filaments first, and dramatically accelerates the subsequent binding of Cof1, leading to heavily decorated, stabilized filaments. Cof1 in turn recruits AIP1, which rapidly triggers severing and remains bound to the newly generated barbed ends. New growth at barbed ends generated by severing was blocked specifically in the presence of all three proteins. This activity enabled us to reconstitute and directly visualize single actin filaments being rapidly polymerized by formins at their barbed ends while simultanteously being stochastically severed and capped along their lengths, and disassembled from their pointed ends.” 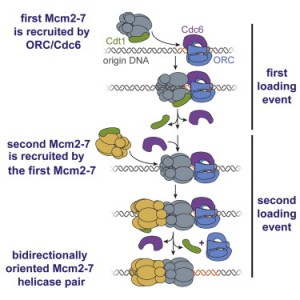 In this study, a collaboration between the Gelles lab and Stephen P. Bell’s lab at MIT, Simina Ticau and co-authors studied the mechanism of “licensing”, the initial process in setting up DNA replication in eukaryotic cells. “Licensing is loading of the ring-shaped Mcm2-7 helicase around DNA origins of replication. During loading, Cdc6, Cdt1, and the origin-recognition complex (ORC) assemble two heterohexameric Mcm2-7 complexes into a head-to-head double hexamer that facilitates bidirectional replication initiation. Using multi-wavelength single-molecule fluorescence to monitor the events of helicase loading, we demonstrate that double-hexamer formation is the result of sequential loading of individual Mcm2-7 complexes. Loading of each Mcm2-7 molecule involves the ordered association and dissociation of distinct Cdc6 and Cdt1 proteins. In contrast, one ORC molecule directs loading of both helicases in each double hexamer. Based on single-molecule FRET, arrival of the second Mcm2-7 results in rapid double-hexamer formation that anticipates Cdc6 and Cdt1 release, suggesting that Mcm-Mcm interactions recruit the second helicase. Our findings reveal the complex protein dynamics that coordinate helicase loading and indicate that distinct mechanisms load the oppositely oriented helicases that are central to bidirectional replication initiation.” 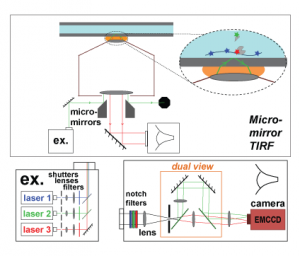 This new Methods in Enzymology chapter by Ben Smith, Jeff Gelles, and Bruce Goode “describe[s] techniques for acquisition and analysis of single-molecule data, applied to the novel challenges of studying the filament assembly and disassembly activities of actin-associated proteins in vitro. We discuss the advantages of single-molecule analysis in directly visualizing the order of molecular events, measuring the kinetic rates of filament binding and dissociation, and studying the coordination among multiple factors. The methods described… complement traditional biochemical approaches in elucidating actin-regulatory mechanisms in reconstituted filamentous networks.”