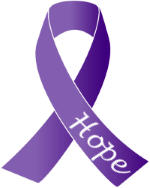 At universities and companies around the world, scientists are studying the mechanisms of cancer and tumors using fruit flies. They hope to identify failures in the genes that lead to cancer, and develop treatments to prevent or reverse these problems. Because approximately 60% of the genes associated with human cancers are shared with fruit flies, these interventions will lead to a better understanding of cancer in humans, a critical step for the development of cures. Fortunately, fruit fly research is already making huge contributions to the field of cancer research and has produced several success stories (with more on the horizon).

What is cancer, and how can flies help?

Cancer is an encompassing term used to refer to a collection of more than 100 related diseases, and is the second leading cause of death in the United States. Although there are many kinds of cancers, all are caused by the uncontrolled growth of abnormal cells. But what causes these abnormal cells to grow out of control?

Usually, when a cell’s DNA is damaged, the cell either repairs itself or dies. But a cell becomes cancerous if it doesn’t (or can’t) repair the damage and then doesn’t die like it should. Instead, it replicates itself unchecked, forming a mass of cancerous cells called a tumor. These tumors continue to grow and invade nearby normal tissue, and can sometimes even “break off” into the bloodstream and circulate into other tissues as well.

Ideally, if researchers can identify the mutation that leads to cancer, they can use it to develop a cure. For example, they can create a drug that recognizes the specific mutation to target and kill cancerous cells, or they can develop a treatment to at least compensate for the mutation. Unfortunately, there are two main reasons why one approach doesn’t work for all cancers. First, there are different types of cancers (such as colon, liver, or lung cancer) which respond to drugs differently, so a different cure would need to be developed for each type. Second, the same type of cancer in one person can often be caused by a different mutation in another. In fact, one cancer may often be caused by mutations in multiple genes, so a drug for a single type of cancer may need to have multiple targets. This variation between and within cancer types means that there can’t be one universal cure.

So how can flies help? There are two very promising avenues for researching cures for cancer. 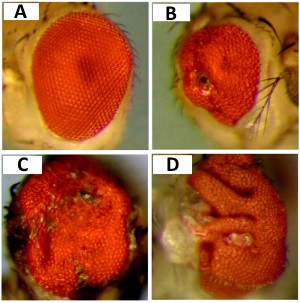 A comparison of eyes from a normal fly (A) versus flies with visible signs of cancer (B-D). Image modified from Uhlirova et al., 2005.

Do flies get cancer? Flies generally don’t live long enough to naturally develop sufficient DNA damage to cause cancer, but flies with genetic mutations like those in humans will quickly develop cancer, and we can easily see abnormalities in the eye (see figure). Researchers can use these flies to investigate how mutations in specific genes led to cancer and test thousands of drug candidates to see if the tumor goes away. Even better, they can introduce the specific combination of human mutations from patients in the flies and then test drugs against it, as described in #2.

Here, I’ll go into detail about the accomplishments of fruit fly research so far, and where they might lead in the future.

Identifying cancer-risk genes and understanding how mutations lead to cancer

Dozens of genes that contribute to cancer have been identified in fruit flies. When a mutation occurs in any one of these genes, it can lead to the hallmarks of cancer, such unchecked cell growth and the formation of tumors. For example, a mutation in a gene known as scribbled (scrib) can lead to masses of disorganized cells similar to tumors.  As mentioned previously, identifying these genes and understanding the role they play in cancer is critical for developing drugs to work against them.

But one of the most important insights we’ve gained from cancer research in flies is how multiple mutations in different genes often cooperate with each other, leading to the invasive properties of cancer that are so deadly in humans. For example, a combination of a scrib mutation with a Notch mutation allows the disorganized cells to invade other tissues and spread to other parts of the fly’s body. Research in flies therefore helps us understand which of the sometimes dozens of combined mutations in patients is “driving” the cancer (so to speak), so doctors can target the most aggressive genes.

The Notch gene is part of a group of genes that make up the Notch signaling pathway, which refers to a group of genes required to do a specific job. The Notch signaling pathway is involved in detecting communications from other cells and acting upon them by controlling each cell’s replication or death. Mutations in the genes in this pathway, therefore, can lead to overactive signaling, allowing for uncontrolled growth and subsequently cancer. In humans, Notch mutations contribute to several types of human cancer, including breast, prostate, and pancreas cancers, as well as cancers of the blood (leukemias). Fortunately, identifying the genes involved in the Notch pathway has led to the development of several promising drug candidates that suppress mutated genes in this pathway, the most studied of which is known as gamma-secretase inhibitors (GSIs). Although more work is needed to confirm the effectiveness and safety of this and other drugs against Notch-based cancers in humans, it is a promising step in the right direction.

Perhaps one of the greatest contributions the fly has made to cancer research was the discovery of the Ras signaling pathway, which is also involved in regulating cell growth. Each of the genes involved in this pathway have also been found in mammals, and the Ras gene itself is estimated to play a role in 30-50% of human cancers. Continued research in this pathway is critical for developing drugs to target mutations in these genes, as these drugs may have broader success against human cancers due to the pervasiveness of this pathway in cancer.

Once cancer-risk genes and pathways have been identified, drug candidates can be tested against them. Thousands of drugs can be screened against cancerous cells in petri dishes, but once drugs that successfully target mutations in cancer-risk genes have been found, they need to be tested in live animals for effectiveness and lethality. Fruit flies, with their short lifespans and massive numbers of offspring, are a great resource as a first step for rapidly testing promising drug candidates.

Thanks to improvements in the speed and cost of genome sequencing, doctors can now take a “genetic snapshot” of a person’s cancerous tumors to find out which genes have mutated. Dr. Ross Cagan and his team at the Center for Personalized Cancer Therapeutics at Mt. Sinai Hospital in New York City are using this approach to identify the mutations causing cancer in individual patients, and then introduce that combination of mutations in fruit flies. Essentially, these scientists are growing personalized tumors in fruit flies, which can be seen in the flies’ eyes (see figure above).

Using those flies, the researchers can test thousands of drug combinations until they find a cocktail that works. Usually, drugs approved for certain types of cancer are hit-or-miss—what works for one patient may not work for others. To make matters worse, cancer drugs tend to damage healthy cells at the same time, albeit less so than the cancerous ones. But using this new personalized technique, Dr. Cagan and crew can figure out what combination of drug works best to kill the tumor without killing the flies.

Besides helping cure cancer in some individual patients, this technique has also inspired the development of a new drug called vandetanib. Dr. Cagan and his colleagues found that this drug (originally known by the catchy name of ZD6474) seemed to work against certain types of cancerous growths, and eventually the drug was picked up by AstraZeneca and approved for the treatment of advanced thyroid cancer.

The technique pioneered by Dr. Cagan and his colleagues will also improve researchers’ ability to identify new cancer-risk genes and understand how they lead to cancer. As these scientists uncover more mutations in their patients, they may start to see patterns emerging, hopefully leading to treatments that have more success across patients, such as those that target the pervasive Notch and Ras signaling pathways.

Using the techniques described here (and others), fruit fly research will likely revolutionize the way we approach cancer research and think about cures. In humans with cancer, we see only the end point without being able to determine how the cancer began. With flies, researchers can go back and study the genes involved in the triggering event. And with luck, we’ll figure out how to keep that trigger from being pulled.