Valentine’s Day is quickly approaching, which means that men (and women) all over the U.S. are performing courtship rituals to woo a companion. But while we humans often have trouble figuring out the right moves to attract a potential mate, fruit flies have it down to a science. And incredibly, researchers can study fruit fly courtship to gain a better understanding of our own brains. 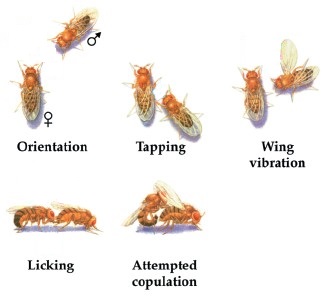 The fruit fly courtship ritual has a set of specific steps. Image modified from Greenspan and Ferveur, 2000.

In polite fruit fly society, males have the responsibility of wooing a female. The mating behavior is composed of several specific steps (see figure), which the males perform in repetition until the female responds (or until the male gives up trying). This courtship behavior is very well understood by researchers, due in part because the courtship ritual is so stereotyped and predictable. Courtship is a complex innate behavior, which means that all flies are born with the knowledge of how to do it. Successful mating means passing your genes on to the next generation, so the networks of neurons responsible for this behavior are critical for survival and therefore consistent among flies. This consistency provides a perfect system for studying how neurons interact to give rise to a behavior.

Fly researchers have made great progress in unraveling the anatomy underlying courtship, and found that the behavior arises from the integration of multiple sensory cues, including smell (is the female releasing “come and get me” pheromones?), vision (does the female look interested?), and touch (am I in the right spot?). The fruit fly brain has to combine all of this information to influence the fly’s decision making. Should he start the next step of the courtship ritual, or try this one again? Can he approach the female and try to mate?

“But who cares about fruit fly sex?” you might ask. The fly researchers studying courtship aren’t necessarily interested in exactly how flies get it on. They’re more interested in a general understanding of how the brain integrates multiple sensory cues to influence decisions. The fact that the “courtship circuit” is critical for survival suggests that it is also used by other important behaviors, and is shared by other species. Think about how much information needs to be integrated for you to hunt for food, drive a car, or even court another human. The complexity is amazing… how does our brain manage that?!  By first studying it in the simpler brains of fruit flies, we can gain a basic understanding that we can apply to our complex mammalian brains.

Studying courtship behavior can provide us with an understanding for how neurons communicate and integrate information to make decisions, but researchers can do even more with it. As our understanding of courtship increases, we can use it to investigate other behaviors that seem more directly related to human health, such as learning and memory, sleep, and addiction.

For example, the courtship ritual is most commonly used to study memory. Researchers have noticed that male flies tend to “give up” after too many rejections, so they’ve developed a learning experiment that exposes males to uninterested females. Normal males quickly learn to give up on trying to mate with them, but what happens if a scientist mutates a particular gene or “turns off” a certain molecule? Now researchers can use courtship to investigate the genes and molecules involved in learning and memory. If a mutant male never learns to stop courting, the gene might be involved in learning. If the mutant male initially learns to give up, but then quickly forgets the experience and tries again, the gene might be involved in long-term memory.

The predictable steps of courtship also allows researchers to easily recognize when a male is impaired in this innate behavior, providing a system for studying brain development. Last year, the Seghal lab published a study in which they used courtship behavior to show that sleep is necessary for normal brain development. They deprived young flies of sleep and found that, as adults, the flies were impaired in courtship. The impairment was due to lack of growth in a brain region important for the behavior, suggesting that sleep deprivation stunts brain development. 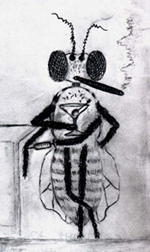 Drawing by the Heberlein Lab

As a final example (and one of my favorites), in 2012 the Heberlein lab produced a paper showing that sexual rejection makes male flies turn to booze. Natural rewards such as sex activate the brain’s reward system, which is also activated by abused drugs and alcohol (did you know that flies can be alcoholics too?). Understanding how natural rewards, drugs, and rejections affect the reward system is important for treating or preventing addiction. From this study, the researchers in the Heberlein lab found that levels of neuropeptide F (NPF), a signaling chemical, rose and fell with reward and rejection. Low levels of NPF drove flies to drink, and artificially raising NPF levels prevented this behavior. Their finding that the same chemical is involved in both natural and artificial rewards directly helps research aimed at understanding a similar chemical in mammals called NPY.

In these research examples, the goal of studying courtship wasn’t to learn about fruit fly sex, it was to use what we know to answer more important questions. Because of these studies, researchers have identified dozens of genes and molecules involved in learning and memory, uncovered more reasons for why sleep is important, and progressed our understanding of how alcohol affects the brain. All of these findings have direct implications for human health because we also share those memory genes, need sleep, and use drugs and alcohol. 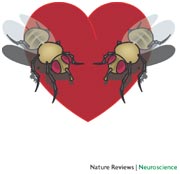 So the next time you see some flies getting it on near your bananas… swat them, because they’ll make hundreds of new nuisances for you to deal with. But afterward, you can smile knowingly to yourself and remember that scientists are studying the act to answer long-standing questions in neuroscience.