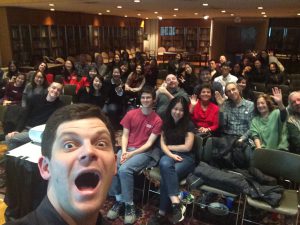 BSIA board. The conference began with an early 7:15 AM breakfast on both Saturday and Sunday, followed by some amazing keynote speakers. One of the most memorable keynotes from the weekend was a man by the name of Biju who had developed a learning app for Indian children that allows kids to study in a more interactive and game focused manner. Another amazing speaker was the Indian fashion designer Sabyasachi Mukherjee who has reached stardom in the fashion world with his portrayal of the modern sari. Throughout the day, my team and I attended a number of incredible panels ranging from women in leadership, to the evolution of news and media in India. Panelists such as Barkha Dutt, an Emmy nominated reporter and Washington Post columnist spoke to her struggles of being a female war correspondent, and how she has been able to overcome prejudice to retain her journalistic integrity.  Other panelist such as Abhinanda Sekhri playfully articulated some of the struggles that Indian television personas face as a result of the current political climate in India. Overall the conference exposed me and my board to some of the coolest Indian innovations on the market today, the modern hardships of an Indian journalist, and the division between Indian politicians (not so far from the political situation in America). Thank you to the graduate students who put the conference together and to my fellow board members for a memorable weekend! 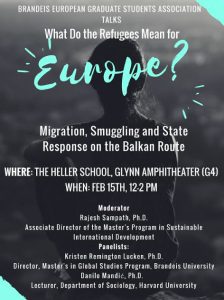 The Brandeis European Graduate Student Association is hosting a panel event on how the influx of refugees in recent years is affecting Europe. The event is going to feature professors from both Brandeis and Harvard University, centering around topics like migration, smuggling, and the state response to the Balkan route. The event will give IGS students a chance to interact with some graduate level professionals who are experts in immigration and the modern refugee. Come to the Glynn Amphitheater (G4) at the Heller School, February 15, 12-2PM, if interested.

As Syria’s brutal conflict unfolded, one woman in New Hampshire decided to take action. Nadia Alawa founded NuDay Syria at her kitchen table in 2013. In just four years, it has grown to a multimillion-dollar humanitarian relief organization.

But how can someone on the outside help those in crisis in a way that respects their dignity? How can we ensure we are aiding and empowering them — not undermining or insulting them? Hear how Alawa grappled with these questions as she found a way to address humanitarian needs in one of the most challenging parts of the world, starting with nothing but conviction and commitment.

NuDay Syria focuses primarily on those in need in Syria, both in besieged areas and in the north. It helps people rebuild their lives through work opportunities, social business and self-sustainability programs for women, along with supporting schools. NuDay Syria sends 40-foot shipping containers of donations monthly from New Hampshire to northern Syria and refugee camps in Turkey. Its crowdsourced campaigns focus on aiding widows and children, with a special interest in empowering women to be self-reliant.

A graduate of Copenhagen University with a degree in pedagogy, Nadia Alawa lives in New Hampshire with her husband and eight children. She grew up in Denmark and has lived in Japan, New York and Massachusetts. She has given a TED talk and has been featured on CBS, NECN’s “The Morning Show” and in The Boston Globe. She also was recognized by The Huffington Post as one of the “Top Ten Muslims Who Save Lives.“