Skip to content
2016 saw perhaps the strongest push towards equal representation of race in media. New shows like Black-ish, Empire, Atlanta, and Insecure have put black actors in the forefront, and the buzz that followed fiercely flooded the internet.

Not only did these shows feature casts predominantly comprising people of color, they were also wildly successful. Reddit threads, articles and blogs praised the shows and networks for finally allowing non-white actors to shine on mainstream TV.

But have we come far enough? Not with Asian American actors, according to data from the most recent Emmy Awards shows.

Currently, there are only two shows on air with Asian American leads: ABC’s Fresh off the Boat and Aziz Ansari’s instant classic Master of None. And the last show to air on television with more than two lead actors of Asian descent was over 20 years ago with Margaret Cho’s American Girl, which enjoyed only one short-lived season while only really being acknowledged for its offensive humor based on caricatural stereotypes.

In terms of Asian American representation, Fresh off the Boat and Master of None seem to be steering television in the right direction, playing less on stereotypes and more on “authentic” character. For example, both series depict, in a light, comedic and digestible way, the lives of first-generation Asian-American children that have grown up in immigrant households.

But while the shows have high ratings and large followings, they haven’t actually drawn too many awards. Let’s look at the 2016 Emmy Award nominees and winners.

Molly Fitzpatrick, a journalist who wrote article “Of 800 main cast members on 100 network TV shows, just 52 (6%) are of Asian descent,” which looked at data on TV shows with Asian American actors in 2015, told me that the best way to look at the problem was to go through series and tally up the number of Asian actors that appear. I did something similar with the results of the 2016 Emmy’s to see how many Asian actors and shows with Asian characters received recognition. In fact, finding data on Asian American representation in media isn’t exactly an easy feat. Momo Chang, content manager for the Center for Asian American Media, pointed me to some older scholarly data, but nothing current.

Below is data organized by show and actor and a tally of wins and nominations in the more popular categories. Only three Asian American actors were nominated. None won. 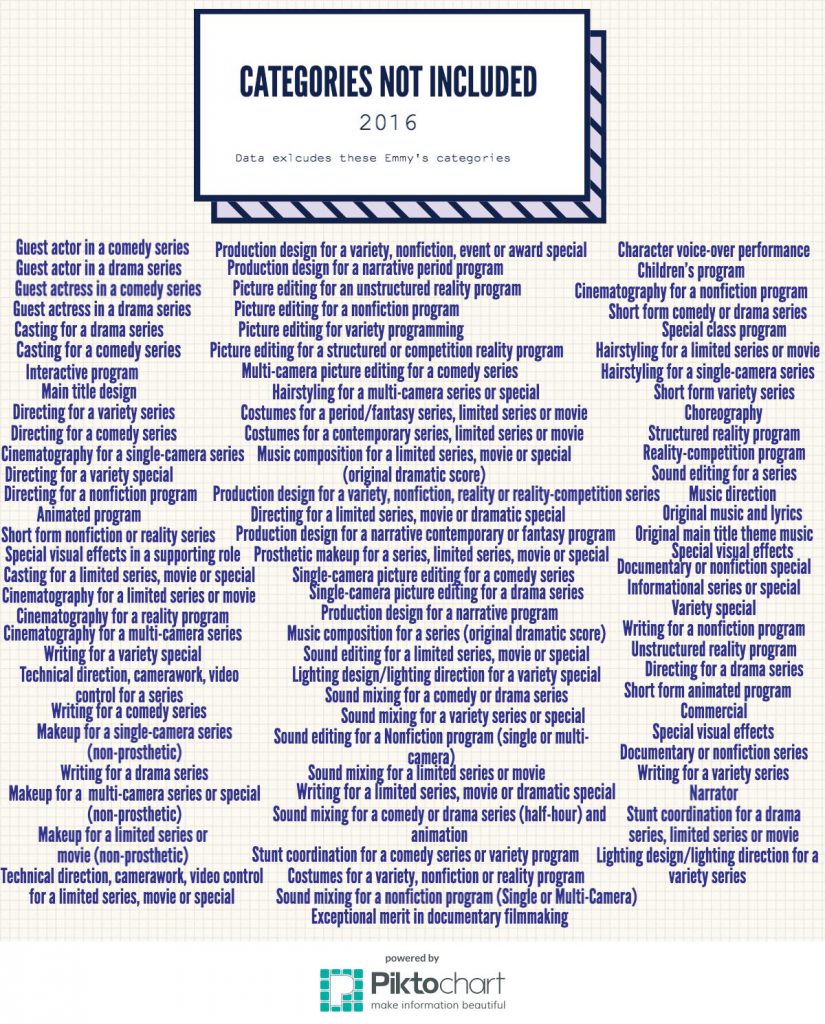 American television shows are off to promising start in embracing Asian characters. But where they’re making baby steps they should probably instead be taking bigger, bolder racial strides; strides that will reach a point where more than just three of the more than 100 actors nominated are Asian.