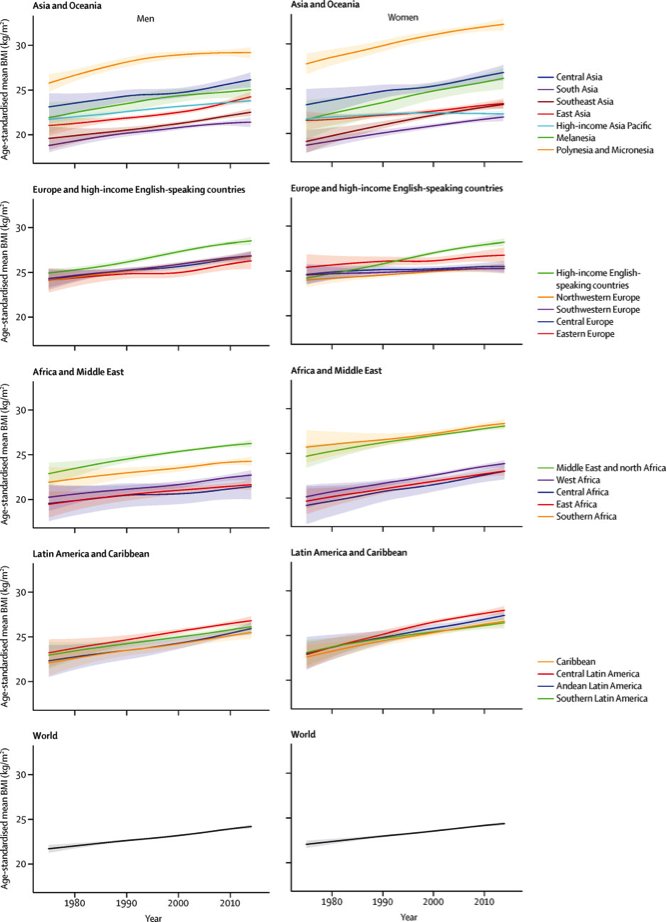 According to a four-decade study recently published in The Lancet, “Trends in adult body-mass index in 200 countries from 1975 to 2014: a pooled analysis of 1698 population-based measurement studies with 19·2 million participants”, there are 266 million obese men and 375 million obese women in the world as of 2014. These numbers, based on estimates in BMI changes from 186 of 200 countries in the world (99% of the world population), are exceptionally high compared to those recorded in 1975: 34 million men and 71 million women. In the world’s poorest regions such as south Asia, however, populations remain underweight. Nonetheless, global obesity is expected to reach 18% of the male population and 21% of the female population by 2025.

According to the study, the largest increase in average BMI occurred in high-income English speaking countries for men and in central Latin America for women. In most areas in the world, more people are obese than underweight. Whether or not we can blame this on fast food places like McDonald’s is beyond my knowledge, but the study does mention that the dangers of being underweight may be just as bad as those of being obese. Being underweight can lead to an increased risk of mortality in diseases like tuberculosis and increases risks in pregnant women and newborn babies. Perhaps our fattening fast food is an evolutionary boost in disguise. However, if you don’t reside in south Asia, watch out. You could very well become the next statistic.

HIV Origins in the U.S. No Longer a Mystery