April 5, 2016 / Michelle / Comments Off on The Mystery Surrounding Sleep

Sleep remains a very mysterious body function. It preoccupies nearly a third of our lifetime, yet scientists and physicians actually understand very little about how sleep works. The mechanisms, molecular pathways, and downstream effects of sleep are actively being explored and investigated by modern scientists. Recent studies suggest that sleep has a much larger role in our daily functioning than we previously thought, and this perhaps creates growing risk factors considering that the CDC reports a third of adults sleep less than seven hours a night.

What We Do Know

While we often think of sleep as our bodies shutting down and becoming inactive for the day, quite the opposite is occurring in the mind. During sleep, our brains are very much in an active state, complex and different than the state of an awake brain.

The brain sleeps in one stage of light sleep, three stages of slow-wave sleep (SWS), and one stage of rapid eye movement (REM). A complete sleep cycle encompassing all 5 stages usually last for 90 to 110 minutes. SWS gives us deep, slow breathing sleep and preoccupies most of our sleep time, and REM interestingly gives us a temporary muscle paralysis and irregular breathing and is when our dreams occur.

We know that sleep correlates with functions of clearing toxins from the brain and reinforcing memory and new information taken in from the day. Sleepiness is caused by a build up of adenosine in our blood as we are active during the day, and during sleep this chemical is broken down. However, the functionality of sleep is speculated to extend much further. Sleep is continuously correlated with moderating behavioral functions of mood and appetite, and sleep-deprivation is correlated with decreased immunity to disease and lower life spans.

What Current Studies Are Investigating

Here are some quick summaries on some recent interesting studies:

1) What you eat may influence how you sleep

2) Sleep deprivation is linked with decreased ability to regulate emotions

Tel Aviv University published in the Journal of Neuroscience that sleep deprivation causes loss of neutrality and impairment of judgement in emotional responses. In essence, loss of sleep causes the loss of ability to sort out levels of important information, which can also result in anxiety from emotional sensory overload.

3) Sleeping problems are repetitively linked with increased risk of diabetes

A new study published in Diabetologia  made a correlation between sleeping problems and an increased risk for developing type 2 diabetes in women. Another study by the University of Colorado shows that after four nights of sleep restriction, subject insulin sensitivity decreased by 23% and diabetes risk increased by 16%.

The University of Chicago Medical Center published a study in the journal SLEEP that found that sleep loss increases a chemical signal in our endocannabinoid system that highers the desire for for sweet or salty, high-fat snack foods and increases a person’s impulsivity to indulge on them. A person likely burns an extra 17 calories for every extra hour they stay up at night, but will likely take in four times the amount the next day as a result.

A study published by Duke-NUS Medical school in the journal SLEEP  shows that a week of 5 hour sleeping nights yields significant reduction of attention, processing, and alertness that aren’t negated after two nights of recovery sleep.

As we can see, sleep involves and is involved in very complex physiological parameters. It’s not just recuperation for the mind, but also a function suggestively intertwined with diet, exercise, immunity, and mental health emotionally and cognitively.

Studies are continuously being conducted every day to get to the bottom of the sleep mystery.  If you’re interested in contributing, the American Sleep Apnea Association and IBM recently launched a mobile app called SleepHealth, a new crowd-sourced citizen science project on sleep. It’s purpose is to help users take learn about sleep health, while also contributing to the first sleep data repository and to current research being conducted by scientists.

How to Engage the Disengaged Pt. 1

In general, people appreciate science, but they’re mostly attracted to the glossy and shiny parts of science. Take this Cyanide and Happiness comic for example: 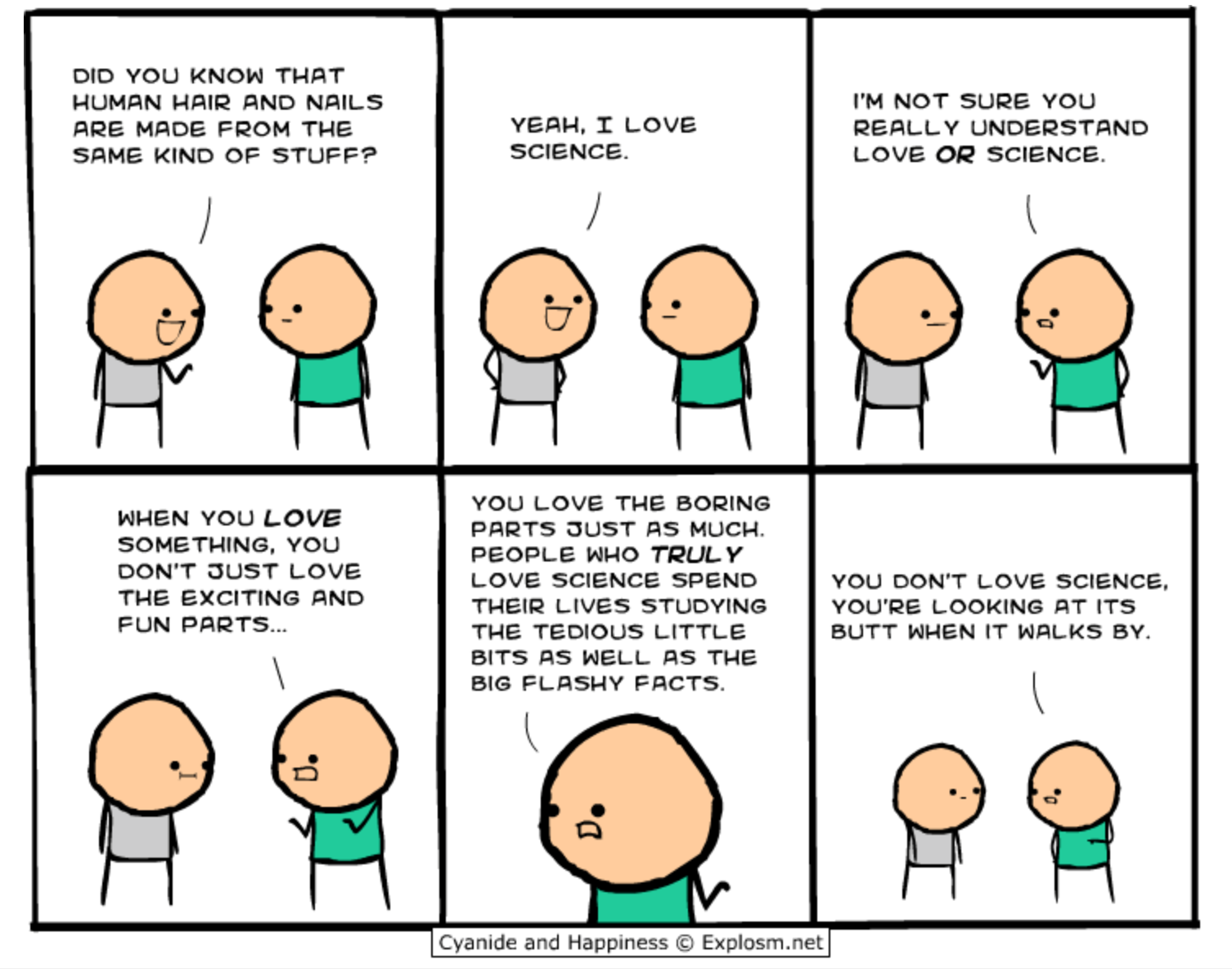 In many instances, science intimidates people. There is a fear, a distance, and an uncertainty about it.  After all, most adults never have another incentive to study or understand science  after high school, and many people write themselves off as not fit to learn or even take an interest in science based off of bad early experiences.  However, with a better cultural understanding of what science is and how it works works, people stand better chances of being able to accurately interpret and approach the information that gets thrown at them on a daily basis.

It’s an issue that scientists and educators are actively trying to tackle, and of course, a primary ambition of science journalism. Only recently have I realized that there is a vibrant community dedicated to initiating and understanding this sort of communication. Actually, “Science Public Engagement” is a HUGE thing. There exist professional agencies that function purely to aid scientists in communication, radio shows (a local Boston one) that intertwine science and comedy, and citizen science projects with an initiative to get regular people involved as contributors to real science research. There was even a national conference last month dedicated to the theme of  Global Science Engagement and science policy (which by the way is coming to Boston next year). A ton of scientists, journalists, and educators are out there collaborating on innovative ways in which non professional citizens can engage into a deeper understanding of science.

Here I summarize some key points from Martin Storksdieck, the Director of the Center for Research on Lifelong STEM Learning at Oregon State University. He spoke briefly during a symposium at the AAAS Annual Meeting in February:

“Science can actually turn people off,” says Martin. The school system is an individual’s first exposure to science, but what ends up happening there are educators simply “throwing out information and hoping that it sticks.”  Instead, we need to take people into an experience. “Combine elements built on what best engage people,” says Martin, “combine your agenda with their agenda.” People become disengaged because no personal meaning is established in their science learning or there is no fear present to drive them. Because of that poor foundation, we need people, from young students to adults to “re-self select themselves into science” and we need to let them rediscover a chance to “own what they learn.”

So we need to think, as scientists and educators, how do we make science not threating, accessible, and meaningful? To get people involved in science, we need to give them the experience of being a part of the science themselves and to show them that it is an important part of their lives.

My brother, an environmental engineer, goes into work every day at a small environmental consulting office in downtown Boston. When you think environmental, you might think “out in the field” or hands-on-work, but instead he works behind the scenes, programming and inputing data into computer models of rivers  significant for high toxic concentrations. His firm serves as the mediator between the EPA and large industrial corporations, responsible for river pollution that happened decades ago, such as PCBs in the Hudson river. The bulk of the work they do is to identify the concentrations of toxins at specific location points and try to decipher where they originated from – not an easy task when the actual pollution occurred forty to seventy years ago, and in consulting, these companies will put up all defenses to reparations of their mistake until absolutely proven that they are at fault.

It’s interesting to think that it took until the 1970s for the US to ban pouring toxic waste into rivers. Who ever thought that was a good idea? Why were hundreds of companies following suit and doing the same thing? It might’ve been the cheapest disposal method then, but now, forty years after legislation banned river waste practices, these same companies are responsible to contribute millions of dollars for clean up and preventative risk. It has taken decades to drill into our heads that whatever you put into the environment has to end up somewhere, and often it stays close to home.

An article published by WNYC this month talks about the pollution of the Passaic River in New Jersey. The EPA has found approximately 100 companies responsible for the contamination of the River from byproducts of manufacturing products such as Agent Orange and hydraulic fluids. These toxic wastes have been strongly correlated as carcinogenic risks and cause of liver and birth defects. However, their current concern is that the fish from these rivers are being caught and eaten by people of the community. While it is strongly advised against consuming the fish and shellfish of the river, it is hard to reach that message out to community member  unwilling to accept or comprehend the associated high health risks. An emergency “fish exchange” program was recently instated last year, in which the EPA in partnership with the polluting companies encouraged people to exchange fish caught from the river for frozen tilapia bought from Costco. However, only 170 fish had been exchanged during the season the program ran, from June to October 2015.

Last minute executions like these are no long term solution to purifying these rivers and preserving the health of the community. To clean up the Passiac River estimates to be around 1.7 billion to remove and replace two feet of the sediment bed. Even then, it would take many years to deem the fish safe to eat. It’s a large project that needs more attention and pressure on polluters to make up for their mistakes.

© 2023 Science and Journalism in Society