Manta in the mirror: evidence for the first introspective fish?

April 5, 2016 / victoria / Comments Off on Manta in the mirror: evidence for the first introspective fish?

You’ve probably heard of the mirror test: place a mirror in front of an animal, and see if they can recognize their reflection. Quick, easy, fun to try on the family dog, and thus far only ever successfully passed by humans, magpies, and a handful of primates, elephants, and cetaceans (Ari & D’Agostino, 2016). Even human children below the age of 18 months have trouble identifying themselves in a mirror (Lewis, 1979). However, according to a study published in the Journal of Ethology this past March, it may be time to add manta rays to the list of animals capable of displaying self-recognition, and if so, they’d be the first fish to accomplish this feat of cognition… ever.

Researchers from the University of South Florida tried out the mirror test on two giant manta rays living at the Bahamas’ Atlantis Aquarium, placing a mirror in their enclosure for a 16-day period, and they witnessed some truly stunning results. The animals were observed to repetitively circle the mirror, lifting their fins and turning sideways to bare their bellies to the reflective surface, but displayed no aggressive behaviors towards the mirror, nor any of the coloring changes previously shown to occur when a ray meets a new individual (Ari, 2014). These behaviors would seem to suggest that the rays were testing whether their reflection moved when they did, and could even have been trying to use it to view areas of their bodies that are normally out of sight. Both of these things would indicate that the rays recognized their mirror images as themselves.

You can watch a sample of these behaviors, below:

Future replication of this research will be necessary to confirm whether the behaviors exhibited by the two animals surveyed in this study are true of their species as a whole, and whether they do in fact represent the act of self-recognition. It’s possible that these behaviors could have arisen from a general sense of curiosity towards the ray’s shiny new toy, rather than anything truly self-oriented. However, these findings would not be completely unprecedented, as giant manta rays do possess the largest brains of any fish species (Ari, 2011). And after this study, it certainly seems that they can put that big brain to use.

Can fear rescue an ecosystem?

The only thing we have to fear is lack of fear itself, says new research in predator ecology. According to researchers from the University of Western Ontario, as published in Nature Communications last Tuesday, fear of predators can be enough to produce a cascade of changes in ecosystem structure, even when there are no predators around (Suraci et al., 2016). These findings shed some interesting new light onto the role that top predators play in an ecosystem, and may even provide us with insight towards how we can repair habitats suffering from a shortage of these long-persecuted, yet ecologically crucial, creatures.

In the Gulf Islands of British Columbia, raccoons have become a downright menace. With humans having locally eradicated all of their natural predators (cougars, wolves, and black bears), these secondary “mesopredators” have run amok, to the detriment of local bird, fish, and crab species. By playing recordings of predator sounds through speakers placed around the islands, and using non-predator sounds as a control, the researchers sought to determine if they could transform the species composition of the island ecosystems by merely convincing the raccoons that predators were near. Sure enough, the introduction of predator sounds led to significant rebounds in the prey populations previously ravaged by the overzealous raccoons, as well as corresponding declines in the populations of species consumed by those prey, in turn. Thus, by harnessing the raccoons’ instinctive fear of predators, the experimenters were able to directly manipulate multiple levels of the Gulf Islands’ ecosystem structure.

Due to their position at the top of the food chain, apex predators can exert profound effects on their respective ecosystems: keeping prey populations down, and all other species impacted by said prey in balance, as a result. Unfortunately, from as far back as the Pleistocene, apex predators have also been a major target of hunting activity, due to the danger they present to humans and livestock. Loss of these species often gives rise to surges in mesopredator populations, which can have serious destabilizing effects on the ecosystem as a whole (Prugh et al., 2009). For this reason, the restoration of predator species has become an issue of great concern to modern conservation. That the fear of predation, in and of itself, may have the power to manifest changes in ecosystem function is not a new concept (Laundré et al., 2001), but this groundbreaking study marks the first true experimental confirmation of this theory.

Before we may claim the ability to reform disturbed ecosystems with only the power of sound, however, some key issues remain to be resolved. For starters, this experiment took place over the course of only one month. It is impressive that such a significant recovery was achieved over such a relatively short timeframe, but without any actual danger of predation accompanying the artificial predator noise, these sounds may lose their threatening nature over time, and the reversal of any effects they may have produced on a given ecosystem would be likely to follow. Additionally, the researchers were merely able to partially reverse some of the trends plaguing an already heavily-disrupted ecosystem. To actually return the ecosystem of the Gulf Islands to its original state, such as it was before the loss of its native predator species, we will surely need more than a few strategically-placed speakers.

Nevertheless, these findings still certainly represent a significant step along the way to determining how best to heal the lasting effects of mankind’s unfortunate predator-killing habit.

Manatees are no longer endangered, but our work is not done yet

Good news for aquatic bovine enthusiasts everywhere! The US Fish and Wildlife Service has recently proposed that the West Indian manatee be removed from the endangered species list, thanks to a significant rebound in the species’ population.

Native to the waters of Florida and the Caribbean, these gentle herbivores, popularly known as “sea cows”, have been protected by the Endangered Species Act since the law’s inception, and were among the first species ever categorized as endangered by the US government. The suggested reclassification follows reports of a 500% increase in the species’ numbers since population surveys began in 1991: a substantial recovery, attributed to the hunting bans, habitat protection efforts, and boating speed limits which were established to protect the slow-moving marine mammal (FWS, 2016). The manatee’s rank will be officially downsized to “Threatened” on April 8th, 2016, with the Fish and Wildlife Service allowing 90 days for any interested parties to debate the decision, but citing a “very low percentage chance of [the species] going extinct in the next 100 years” (FWS, 2016).

While this encouraging news certainly indicates that previous conservation efforts have been fruitful, it should not be mistaken for any final victory in the long-standing struggle to protect the West Indian manatee. The creature is still listed as “Vulnerable” by the International Union for Conservation of Nature, a title denoting species that are “likely to become endangered unless the circumstances threatening [their] survival and reproduction improve” or which are “considered to be facing a high risk of extinction in the wild” (IUCN, 2000). Likewise, the Fish and Wildlife Service has not recommended that the regulations currently in place to protect the West Indian manatee be reversed in the wake of its recent reclassification.

The conservation of a species is a continuous undertaking, not a final destination. With this in mind, the Fish and Wildlife Service’s promising news should not be interpreted as grounds to abandon the efforts which have allowed for the partial resurgence of this long-imperiled species, in the first place. But in light of this inspiring development, and with our continued support, perhaps the West Indian manatee may once again achieve the safety and stability it once enjoyed in its native ranges. 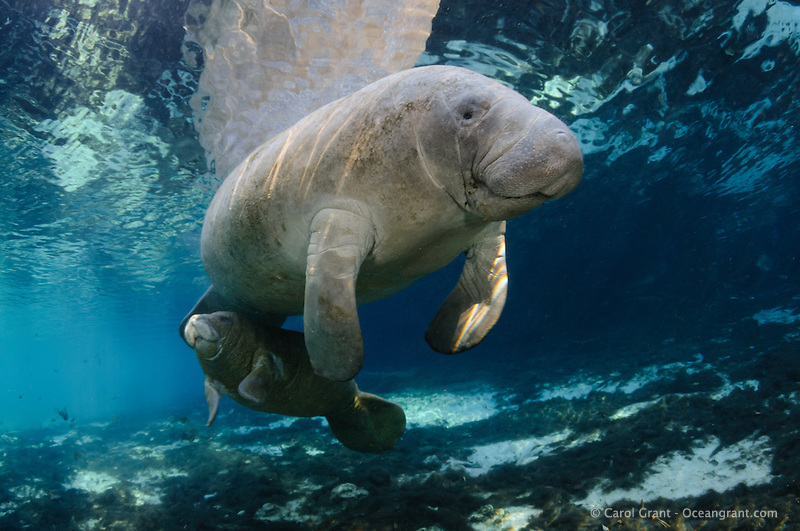 © 2023 Science and Journalism in Society