A Time to Act and a Time to Tell

Today’s blog post is by Jonathan Krasner, who is a visiting scholar at the Mandel Center this year. 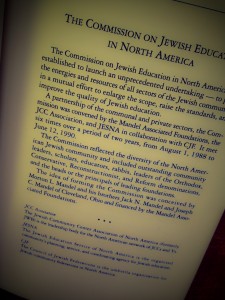 “When do contemporary events become history?” my eighteen-year old nephew asked me as we were walking together in Jerusalem one evening during my recent research trip to Israel. The question was more relevant to my work in Israel than he could have realized. And it has been very much on my mind since my return.

The object of my study is the Mandel Foundation’s Commission on Jewish Education in North America. It met between 1988-1990 and issued an arguably landmark report on Jewish education, A Time to Act, and launched the Council on Initiatives in Jewish Education (CIJE), an ambitious but ultimately unsuccessful project to implement the Commission’s recommendations. The Mandel Foundation recently donated the American records of both initiatives to the American Jewish Archives in Cincinnati. The additional relevant documents that are housed in the foundation’s Jerusalem offices provided the rationale for my recent travels.

The Commission report helped to usher in a communal-wide reprioritization of Jewish education by federations and family foundations. But one of the questions with which I am struggling is the extent to which the Commission was a catalyst versus a manifestation of the changing communal zeitgeist. To put the question more directly: Was the Commission instrumental in creating the momentum that placed education at the top of the American Jewish communal agenda, or was it a reflection of a change already in progress?

Complicating matters further is the appearance of the 1990 National Jewish Population Study only one month after the Commission’s report. Much as the recent Pew Study rocked the American Jewish establishment, the 1990 NJPS created waves and elicited collective handwringing with its report of a (since disputed) 52% intermarriage rate. Fear of rampant assimilation was the engine that motivated increased philanthropic support for Jewish education initiatives over the next two decades, ranging from Taglit-Birthright to PJ Library to the revitalization of Jewish camping through the Foundation for Jewish Camp. What is less clear is whether the NJPS stole the Commission’s thunder and blunted its influence, or whether A Time to Act became a roadmap for the investment and transformation the NJPS inspired.

One leading veteran educator recently confided that he “can’t think of anyone in the1990s [aside from the directors of the CIJE] who said they were basing their work on A Time to Act.” But the influence of the Commission was almost certainly more subtle and more significant. The late-1980s gathering of leading philanthropists and foundation directors around a single table to discuss Jewish education was unprecedented. Even if most were ultimately only peripherally involved with the CIJE, many initiated their own programs (e.g., Birthright, Covenant Foundation) and partnerships (e.g., Partnership for Excellence in Jewish Education, Jewish Early Childhood Education Initiative, Foundation for Jewish Camp) that concentrated on particular sectors in the Jewish educational landscape. And even if some of these funders parted with Morton Mandel and his professional team, embracing competing change models, their priorities (e.g., cultivating leadership, training personnel) were often aligned with those identified by the Commission. What role did the Commission ultimately play in engaging and cultivating these funders and steering them towards Jewish education? It’s a difficult question to answer and one that I am continuing to work on.

One of the Commission’s greatest successes was in raising the bar for these subsequent initiatives, particularly in the areas of research, design, and evaluation. During the life of the Commission, its staff conducted qualitative and quantitative research and generated numerous reports which provided a much-needed picture of prevailing conditions. Thus policy discussions that in the past had been driven by intuition and emotional commitments became grounded in and elevated by supporting data.

As I dig deeper into the Commission papers, conduct interviews with Commission staff and members, and further contextualize the Commission in the political, social and cultural environment of the late 180s and early 1990s, I hope to get a better sense of where the Commission fits in a larger narrative about late-20th century Jewish educational reform. With many of the key players in the late-1980s still active in Jewish life, perspective-taking may be challenging. Hence, my nephew’s question continues to reverberate in my head. On the other hand, twenty-five years is a long time, and the economic meltdown of 2007-08 has arguably ushered in a new era animated by a different set of paradigms. I hope this distance will facilitate a clear-eyed accounting and analysis.

A Few Thoughts on the Roots of the Identity Discourse