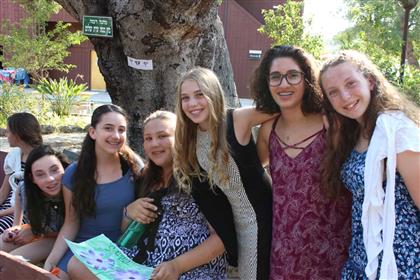 “Chanichim, follow your madrichim to the teatron for peulat erev.” For those not conversant in the language of many American Jewish overnight summer camps, that means “campers, follow your counselors to the theater for the evening activity.” Why do some camps feature sentences like this, or decorative Hebrew signs, or spirited Hebrew song sessions? How does Hebrew usage differ among the wide variety of Jewish overnight camps? These are some of the questions we set out to address in our study of Hebrew use at camp. While we are working on a book presenting the full study, we want to share some of the results with you: findings from a survey of 103 camp directors of diverse Jewish residential camps across North America, about their camps’ use of Hebrew.

Our findings show that, for the most part, in the minds of camp administrators, Hebrew usage at camp is not about developing proficiency in spoken Hebrew. Rather, it is a vehicle for nurturing feelings of belonging to the camp community and the broader Jewish community, as well as connection to Jewish sacred texts, Israel, and the Jewish people. We asked respondents to rate the importance of 15 educational goals that a Jewish camp might have, of which seven were related to Hebrew. We found that Hebrew goals rank much lower in importance than goals such as enhancing personal Jewish identity and strengthening connection to the State of Israel. Among the Hebrew goals, those regarding feeling connected and being exposed to Hebrew ranked much higher than those related to Hebrew proficiency. More specifically, promoting knowledge of Hebrew prayers, songs, and select words and strengthening campers’ emotional attachments to Hebrew were more important than strengthening their ability to speak or read Modern Hebrew or to read Biblical or Rabbinic Hebrew.

In addition to understanding the “why,” we also want to understand the “how” – findings from which are especially beneficial to the broader field of Jewish education. How do camps foster connection to Hebrew? It depends on the camp. Some camps perform Hebrew word skits, give Hebrew names to divisions, locations, and activities, and use phrases like boker tov (good morning), sheket b’vakasha (quiet please), and chadar ochel (dining room). A few camps even offer classes or immersion programs with the goal of proficiency. Camps that have more Hebrew practices also tend to have staff with more Modern Hebrew language knowledge, more Israeli shlichim (emissaries), and a primary goal of fostering campers’ connection to Israel. The camp networks with the most Hebrew practices are Ramah, Young Judaea, Bnei Akiva, and Habonim Dror. Many independent, pluralistic camps and those affiliated with the JCC Association engage in few or none of these practices, but they do sing Hebrew songs and prayers/blessings and use Jewish life words like Shabbat shalom and tikkun olam. Aside from Bnei Akiva camps, most Orthodox camps only use Hebrew in prayers and songs, decorative placards with liturgical quotes, and Jewish life words like tefillah and Birkat Hamazon.

As this diversity indicates, Hebrew is one of the many elements that give each camp its own unique character and allow it to define its understanding of Jewishness in North America. The diversity in Hebrew practices shows that Jewishness at camps has multiple meanings as Hebrew practices are associated to varying degrees with Israel, religious observance, social activism, and/or spirituality. Despite (or perhaps because of) this great diversity, our survey reveals that Hebrew serves as a common denominator. We did not find any Jewish-identified camps that have no Hebrew at all; even the most secular camps have at least a few Hebrew songs or words. No matter which Jewish summer camp children attend, they will likely come away with the message that Hebrew is a part of Jewish life.

What can camp staff, Jewish educators, and policy makers take away from our study? First, because Hebrew is one of the tools camps use to foster Jewish belonging, it behooves us to be more intentional about how Hebrew-imbuing activities can be conceptualized and professionalized. Camps and umbrella organizations might devote (more) attention to who is responsible for this effort and how this knowledge gets passed down over time and across different camps. Second, in an age of polarization, Hebrew can be more purposefully used as a tool for promoting Jewish unity and cultural vitality. When Hebrew is infused into the camp’s soundscape and visual landscape, it inspires cultural expression and serves as a group marker, conferring insider status even as it sidesteps potentially divisive religious or ideological differences.

Our findings raise questions about how the Hebrew practices at camp can be incorporated into Jewish educational activities in other Jewish communal settings, such as synagogues, JCCs, and religious schools. The survey results show that Hebrew infusion gets a big bang for its buck. Without much commitment of time or resources, staff members can incorporate Hebrew words, signs, skits, and songs. While some educational institutions have enough instructional hours to offer Hebrew immersion and other programs that lead to students’ fluency, others simply do not. When Hebrew proficiency is not an attainable goal, educators can look to camps for other ways of approaching Hebrew. Hebrew infusion can lead to strengthened Jewish connections and communities.

Sharon Avni, Sarah Bunin Benor, and Jonathan Krasner are Associate Professors at CUNY, HUC-JIR, and Brandeis University, respectively. The survey discussed here is part of their larger study of Hebrew at North American Jewish Summer Camps, at the Jack, Joseph and Morton Mandel Center for Studies in Jewish Education at Brandeis University, with funding from Consortium for Applied Studies in Jewish Education (CASJE). The project also involved interviews, camp observations, and historical research. The results of the full study will be presented in future articles and a book. You can read the full survey report here