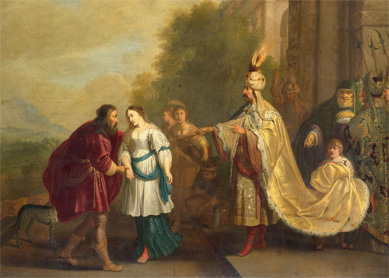 Five years (and one doctorate) later, I am back in the Tanakh classroom, this time in an elementary school. Immersed in the study of biblical texts with these younger students, I am noticing something I never experienced teaching high school.My current students are neither interested in the interpretive activity of word analysis nor disengaged from the study of the text. They have exposed me to a third path, which, upon reflection, is beautiful and  profoundly new to me: They access the biblical text with their imaginations. Saul’s interpretation above comes not first and foremost from a game of “literary play” with words and phrases as his game pieces, but from a place of imagination. What might have happened?

In my classroom the students spend two weeks “preparing” the text we are studying by working on translation and fluency and understanding commentators. Once the text is prepared, the students have a whole-class discussion where interpretive authority and control are handed over to them. They sit in a circle with only the text in front of them and three to four questions they generate. With the freedom to explore, the students notice the very gaps and inconsistencies in the text that I would have pointed out. They ask the questions that I would have asked. But they employ their imaginations to answer their questions and fill in the gaps in ways that make sense to them.

Karen Gallas is an elementary teacher of over 30 years and a pioneer in teacher research. In her book Imagination and Literacy: A Teacher’s Search for the Heart of Learning (2003), she wrote, “Imagination is the unspoken power of mind that schools do not attend to, except when we sometimes allow it to surface in more marginalized subjects, such as art, and music” (167). Gallas wished to teach her students what my young students have taught me: “Children’s imaginal worlds help bridge the gap between their ‘now’ and the new worlds of texts” (24).

I didn’t see this sort of interpretive work while teaching high school. In part, I believe it’s because students’ comfort with their imaginations has often been extinguished by 9th, 10th, and certainly 11th grade, in favor of formal analysis, procedures, and templates. But this void leaves any student who does not love the game of word analysis with no door into text study. Kant (1969) wrote, “The imagination is a hidden art in the depths of the soul whose true devices, nature will scarcely let us divine” (181). Having seen a glimpse of this hidden art, I feel the need to declare my commitment to kindling it in my students, my classroom, and my students’ relationships with texts.

Ziva Hassenfeld is a post-doctoral fellow at the Mandel Center.