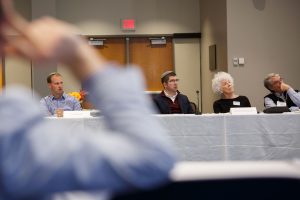 At last month’s conference on Jewish summer camping, at Brandeis’s Jack, Joseph and Morton Mandel Center for Studies in Jewish Education, I hoped my participation would place a friendly parenthetical question mark at the end of the conference title. This hope grew out my research, which  questions the assumptions Jewish leaders and educators hold about camp’s power, and highlights the perspective of the youth they seek to mold.  However, I ultimately found it refreshing to talk about camp with fellow scholars and practitioners–people who, like the historical figures I write about, participate in and shape the lived experience of Jewish camping today.

My talk focused on the role of Israel in camp from the early 20th century through the current day. I argued that postwar camps brought on a broad transformation of Zionism in America, as camp leaders harnessed the nationalist ideology, turning it into a tool towards building Jewish identity in a moment of anxiety over perceived Jewish cultural decline. In the aftermath of the Holocaust, furthermore, Jewish educators debated whether children would identify more strongly with Judaism through the lens of “suffering” or “heroism,” exemplified by Warsaw Ghetto resistance fighters and chalutzim. While they ultimately instrumentalized both themes,  heroic ideas about Zionism became especially ubiquitous in camps across movements, embedded into camp life through a variety of activities and through language, in part because campers responded to it more enthusiastically than they did to stories of suffering.

Bringing the issue of Israel at camp into the present, I ended my talk with the challenge IfNotNow’s #YouNeverToldMe Campaign poses to camps today. Drawing on my personal experience leading a session on the history of Jewish camping for a camp counselor training IfNotNow held in Boston in 2017, I concluded:

… But besides making them better, wiser, and kinder critics, I also urged the participants to think past the occupation. By focusing on heroism and Jewish pride as a counterbalance to suffering and tragedy… what histories, cultural touchstones, and ideas have camps missed an opportunity to talk about? What are the consequences of Israelification beyond politics or the Israel-America relationship? How does the shlilat hagalut [negation of exile] that can occur when one looks towards Israel for its identity hurt the development of a vibrant American Jewish culture?

In the conversation that followed, participants grappled with the questions I posed to the counselor-trainees, and with the questions that IfNotNow brings up for camps today more broadly. Considering the fractious discourse surrounding IfNotNow in the Jewish press, I was heartened to see that the response was not to deny or ignore the urgent issues youth today bring up surrounding Israel and the occupation, although it seemed most in the room would still not interact directly with IfNotNow as a movement. Only time will tell how these contemporary trends will shape Jewish camping in the next few decades, but as both a historian of camping and a millennial with a finger on the pulse of these issues, it was exciting to be in an open conversation with the people who work on the ground.

Sandra Fox is a Jim Joseph postdoctoral fellow in education and religion at Stanford University.

Social Movements, Music, and Other Explorations at Camp Conference