I’ve read many articles about the famous Leonard Bernstein, but it wasn’t until recently when I came across a piece about Bernstein as a composer that I began to fume. The piece, Too Much Bernstein Leaves a Critic Fed Up with his Music was an op-ed by Anne Midgette, featured in The Washington Post this past year. (1) To say the least, Midgette has a lot of frustration about Bernstein’s music.

Anne Midgette is an American journalist and classical music critic who has spent most of this year attending concerts and events that celebrate Leonard Bernstein’s 100th birthday – which took place this past August. In these last few months Midgette has gotten to listen to a wide range of Bernstein’s creations from recordings of the “Complete Works”, put on by Deutsche Grammophon, to the soundtrack of West Side Story. After listening to almost every performance Midgette has unfortunately come to the conclusion that she dislikes him as both a musician and a person, “‘Hate the man, love the music’ is the favorite counsel of music-lovers in such instances (Richard Wagner comes to mind). In Bernstein’s case, I’m no longer sure that I have all that much tolerance for either.” This claim is a clear example of Midgette’s frustration as she expresses disappointment in both his character and work. I can understand where she comes from in her argument about Bernstein as a person; there is no doubt that Bernstein could be a difficult person to be around – even his daughter felt that way (Tongue kissing). (2) My question is, what specifically does Midgette not like about his unbelievable story-telling scores?

One comment that Anne Midgette makes in her op-ed is, “Most people who are familiar with Bernstein’s work have had some moment that they find toe-curling. I tend to squirm at his bickering-married-couple pieces, from “Trouble in Tahiti” through to “Arias and Barcarolles,” his final work.” (3) The use of squirming in this statement clearly has a negative connotation of irritation with his score. However, how could one be irritated with the music from “Trouble in Tahiti”?! The score is genius. Bernstein pushes boundaries to open the public’s eyes to the realities of suburban life in the 1950s. While society wanted people to believe that suburban families with the mother who stayed in the kitchen all day, the father that brought in the income, and the children that ran around and played in the street were all always happy, Bernstein reveals that no family is or was ever that perfect. Instead, through his progressive music and lyrics, Bernstein captures the daily tensions that occurred in a typical household and challenges the characters to reflect on their not so great lives. (4) The couple featured is clearly very irritated with one another and Bernstein’s music only adds to the effect.  One opportunity an artist gets is to challenge society and introduce topics that are hard to talk about because they have so many supporters and thus hold influential roles. Therefore, there is no reason to get upset at the music of “Trouble in Tahiti” because at the end of the day Bernstein was just using his platform and creativity to speak out, and even more so, he did it beautifully.

Midgette doesn’t only have a problem with “Trouble in Tahiti” and “Arias and Barcarolles”. She continues her rant and also complains about Bernstein’s famous third symphony, “Kaddish”, “Other roll their eyes at his attempts at religious statements in “Kaddish” in which the narrator engages in a long 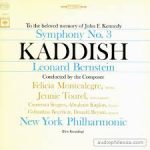 dialogue with God”. (5) There is a clear negative attitude towards this piece, solely from the fact that she believes an acceptable response to the “Kaddish” is to roll your eyes. I firmly disagree and am uncomfortable with this. Firstly, Leonard Bernstein dedicated this symphony to the memory of former president John F. Kennedy, which was performed a few weeks after his tragic assassination. Bernstein and Kennedy were good friends and therefore he dedicated the Kaddish – a Jewish prayer for the dead – to Kennedy’s memory. (6) Thus, rolling one’s eyes is disrespectful because it offends the beautiful gesture that Bernstein was trying to make. Secondly, the “Kaddish” deals with such a universal topic in society, “what can we believe in when mankind has the desire and capability to destroy itself?” (7) When this piece was composed, the world was falling apart. People were in the midst of the Vietnam War, the struggles of the Civil Rights movement were all over the media, and the Cuban Missile Crisis had only occurred a year earlier. Thus, this idea of who or what to have faith in was very prevalent at the time. Bernstein exposed this conflict through a symphony about someone questioning and challenging a humanistic God. (8) It had to have been a relevant performance back then because the fear in the narrator’s voice had to have been recognizable and relatable. In the 1960s, people were in the midst of massive chaos and uncertain of about the country’s future. Thus, these pieces and lyrics probably sparked reflection and forced the audience to begin contemplating their own personal and societal struggles.  In conclusion,  the end of the symphony is very moving; it doesn’t finish on a happy note like most endings. Instead, sung by a full choir, the ending is filled with suspense, suggesting that all is still not right in this world. It seems that peace is still yet to come. (9) The message from this ending was not only relevant for the issues happening fifty years ago, it is still a concept that we have to accept in the today. There are still so many unfinished disputes: gender equality, anti-Semitism, racism, and Bernstein’s message is an important one, we need to start figuring out a way to obtain peace. In my eyes, this section alone should deeply and positively affect anyone and everyone.

I find Bernstein’s risk taking, activist style of composing very moving and I would be happy to talk to Anne Midgette in person any day to discuss our opinions further. Until then, while Midgette is, “looking forward to spending some time without him”, I can’t wait to continue diving into the famous composer’s life. 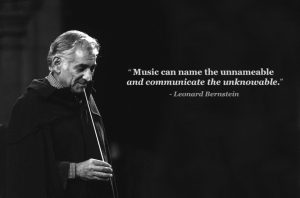 (2) Midgette, Anne. “Too Much Bernstein Leaves a Critic Fed up with His Music.”

(3) Midgette, Anne. “Too Much Bernstein Leaves a Critic Fed up with His Music.”

(5) Midgette, Anne. “Too Much Bernstein Leaves a Critic Fed up with His Music.”