I chose to discuss Leonard Bernstein’s religious beliefs and his work, “Kaddish”. His father was rabbinical and he was always very impressionable in terms of this. 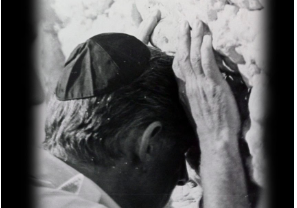 Leonard Bernstein composed “Kaddish” in 1963. His religious values were always public just like his political views. He spent time in Israel and even worked with the Israel Philharmonic in 1948. His father, Samuel, was an orthodox Eastern European Jew, but was apart of a conservative temple. Bernstein participated in services at this temple and the choir and organ are said to be important pieces to the start of his musical career. A quote from 1990 says “I used to weep just listening to the choir, cantor, and organ thundering out”.

He apparently heard his first piece of classical music at this temple as well. It is clear already, that his father’s religious values had a great effect on Bernstein’s childhood and his path to music. People came from all over on Friday nights to listen to the music played, so Bernstein was not the only one affected by the sound. “Bernstein’s third symphony, “Kaddish,” was completed in 1963 and focuses on the Jewish mourners’ prayer in Aramaic and Hebrew that affirms God with no mention of death. 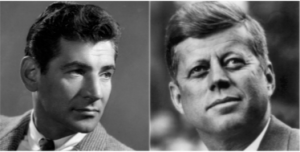 He premiered this piece shortly after John F. Kennedy’s assassination. In it, Bernstein argues with God through powerful music and strong narration” (Rudin 2018). The piece has a full choir, a boy’s choir, a soprano soloist, and a narrator. Watching this online doesn’t do it justice, but it is creates an emotion and almost anxiety similar to the response you typically get when listening to “Age of Anxiety”.