Prior to my sophomore year of high school, I had not truly understood the significance and influence of the composer, conductor, educator, and humanitarian that was Leonard Bernstein. It was not until my participation in the Boston University Tanglewood Institute in 2016 that I truly began to recognize Bernstein as a composer of great importance due to his unique talent of composing for both orchestras and vocalists. In that particular summer, I sang Bernstein’s “Make Our Garden Grow” with the Young Artists Chorus and was also able to watch the Young Artists Orchestra perform various orchestral works by Bernstein. With that said, I became quite intrigued by the complexities and variation of different styles of music in Bernstein’s compositions, especially Candide.

In class, we discussed Candide as an operetta based on Voltaire’s novella with the same title and inspired story lines, yet I decided I would further analyze four of my favorite pieces in this operetta: the overture, “Best of All Possible Worlds”, “Glitter and Be Gay”, and finally, “Make Our Garden Grow.” 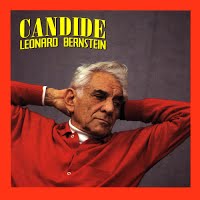 The overture immediately gives the audience a taste of what to expect throughout the operetta by incorporating various tunes from other songs in the performance into the overture, including “The Best of All Possible Worlds”, “Oh, Happy We”, and “Glitter and Be Gay.” There are various nuances to the performance elements of the overture (different orchestrations exist) when dealing with a full symphony orchestration vs. a theatre-sized orchestration, especially. The instruments and usage of percussion effects in the composition changes and is evaluated depending on the orchestration, and in the case of a full symphony orchestration, instruments and percussion effects are doubled. The outcome of such is an increase in volume, thus increasing the dramatization of the piece. 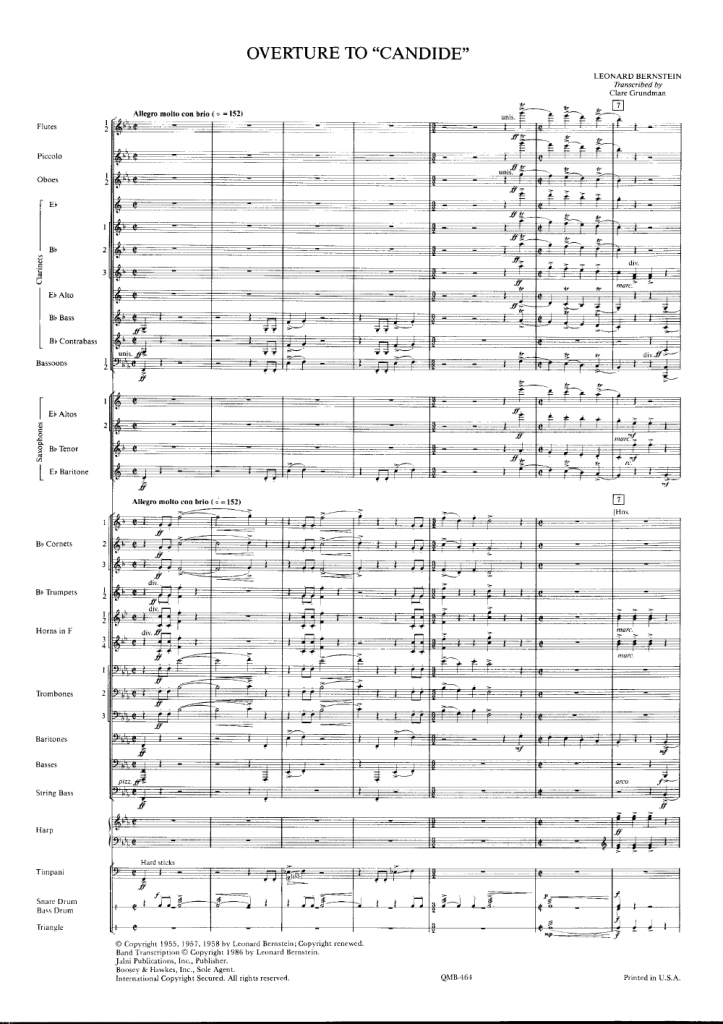 While the operetta first premiered in 1956 with a libretto by Lillian Hellman, the overture was first performed in concert by the New York Philharmonic in 1957, and quickly escalated into becoming one of the most popular orchestral compositions by a 20th century American composer.

Here is a clip of Bernstein conducting the overture in a concert performance with the London Symphony Orchestra in December of 1989. Pay attention to the little dance that Bernstein does in the beginning!

The Best of All Possible Worlds

“The Best of All Possible Worlds” is sung following the vibrant overture and finally introduces the audience to the different personalities and voices of the characters that they will become invested in throughout the operetta’s duration. Dr. Pangloss, in particular, takes center stage when explaining his optimistic, yet unrealistic philosophy on life to Candide, Cunegonde, Maximilian, and Paquette. He claims that despite the current circumstances of where they are living (Westphalia, their home, will soon be part of a war), and through life’s trials and tribulations, Westphalia is a place that is “the best of all possible worlds.”

Here is a clip from a May 2004 Candide concert with the New York Philharmonic. Make sure to listen for moments of the overture!

This quite catchy piece is highly upbeat and has consistent energy, and it also showcases the individual personalities and unique qualities of each of the characters before they are explored more in depth through the remainder of the operetta. Bernstein allows for this specifically to happen through his usage of having the characters pause and think before singing their next verse, as well as respond to each other using the same rhythmic patterns and call and response techniques. 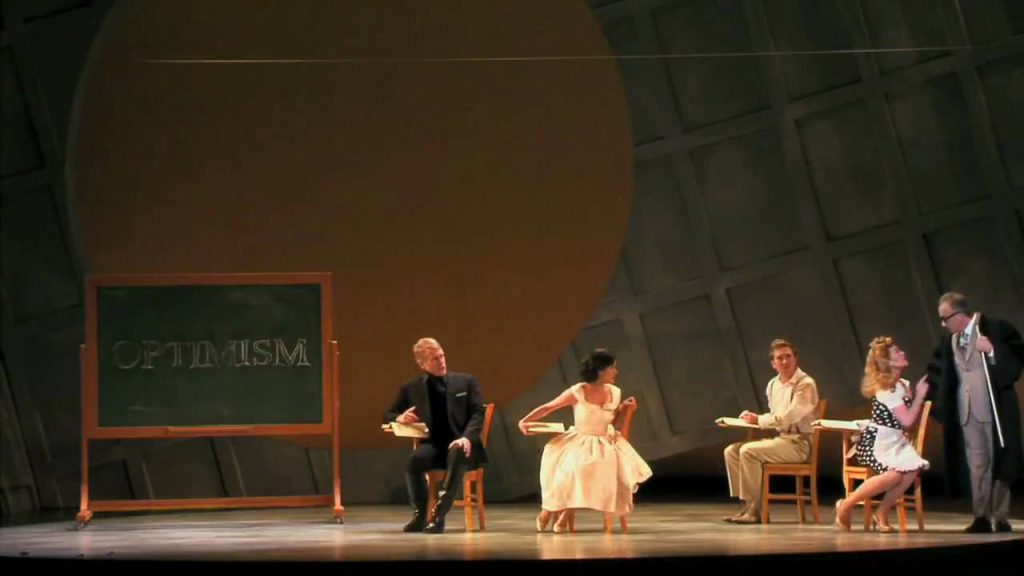 Glitter and Be Gay 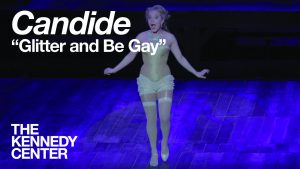 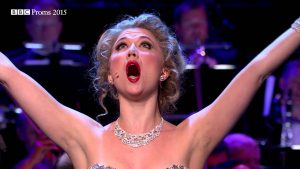 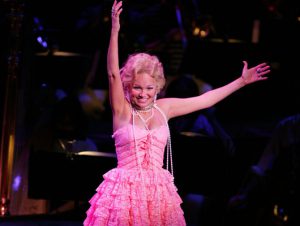 “Glitter and Be Gay” is centered completely on Cunegonde, and she dramatically sings this aria from start to finish as she stands in the home of two wealthy men in Paris. She decries the situation she is in in front of the audience, one where she is forced to accept jewelry and appear happy, when she is really lamenting her life and the unfortunate, tiring journey she has been on up until this moment (she is seemingly killed during Westphalia’s war, but somehow turns up alive in Paris). The aria itself changes in many ways throughout its duration, with an emphasis on a variety of different tempo markings, as well as the intensity of its drastic range. Impressively, this aria includes three high E flats, two staccato, and one sustained; as well as numerous high C and D flats scattered throughout. Beyond this, the character and theatrical elements are also very demanding, as Cunegonda must sing and act with a specific satirical quality that Bernstein wanted to showcase through his music.

Here is a clip from a BBC production of Candide in 2015. 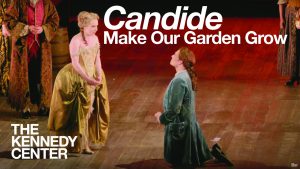 “Make Our Garden Grow” is the final piece of music in Candide, and it is reflective of the moment that Candide and Cunegonda exchange vows after finally being reunited following their individual journeys and adventures throughout the operetta. As each character sings individually, the chorus reunites with the two and everyone sings together and embraces one another in the community. The orchestra emphasizes the celebration, but a more powerful moment occurs at the end when the orchestra stops playing, allowing the voices of the characters and choir to take center stage and emphasize the message of coming together as one as the operetta concludes.     In response to this particular piece by her father, Jamie Bernstein has said: “The soaring chorus seems to be telling us that growing our garden is a metaphor for the flowering of mankind itself.” The greater takeaway for the audience is that while no individual or community is ever perfect, we can all work together to grow and become better, not only for ourselves, but for the people we love around us.

Here is a clip of Bernstein conducting “Make Our Garden Grow” from the same  1989 concert.

“This is a moment of inquiry for the whole world: a moment when civilization looks at itself appraisingly, seeking a key to the future.”

Smacked in between his other three most famous works, On the Town, Candide, and West Side Story, Leonard Bernstein’s Trouble in Tahiti was composed in 1951, a composition he first began during his honeymoon. This 45 minute, one-act opera immediately begins with the repetition of the phrase, “the little white house,” set throughout the prelude. Catchy as ever, the opening trio (the narrators of this drama) sings in close harmonies, setting the perfect scene of an almost idealistic suburban town with nuclear families and weather that’s always pleasant. Above all, people are happy, hustling and bustling and enjoying life, including everything from the mundane to the extraordinary. It’s the 1950s, but as the jazzy beats dwindle away from the opener and the music changes its theme and course as the first scene begins, the audience soon starts to realize that such a utopia is not everyone’s reality. Cut to Sam and Dinah, the two main characters in this story; they’re married with a child, but their life is far from perfection as they suffer through the trials and tribulations of marriage, as well as dissatisfaction with each other, themselves, and their environment. Audience members experience an intimate day-in-the-life of the family, which begins with an argument over the breakfast table, followed by Dinah’s garden day dreams, Sam’s naughty indiscretions, awkward street run-ins, personal reflections about parenthood, and a mention of a movie recently released titled Trouble in Tahiti. Ultimately, the couple may or may not be able to overcome the struggles of married life, but the audience is left to believe that regardless of whether the couple chooses to stay together or not, Sam and Dinah have a long road to personal recovery ahead of them.

But Bernstein’s role as Trouble in Tahiti’s composer extends far past his composition abilities. Bernstein first premiered Trouble in Tahiti at Brandeis University in June of 1952 for an audience of close to 3,000 people. At the time, Bernstein was on faculty at Brandeis serving in the music department, a job that began in 1951 and would continue through 1956. It was in 1952, however, that Bernstein initiated the Festival of the Creative Arts (a festival that still exists today), which was the setting for Trouble in Tahiti’s premiere at 11:00 p.m., as an all-day symposium had gone way over schedule. Along with a weak amplification system, the stage outdoors being just barely built, and pressure from his fellow Brandeis colleague Irving Fine to finish the opera just in time for the festival’s commencement, Bernstein felt that his newest composition wasn’t ready to his satisfaction for the performance, and he ended up deciding to rewrite the final scene for the next showing he would have later on that summer at Tanglewood.

As a conductor, part of Bernstein’s job was to educate the public by introducing new types of music and probing interesting concepts for deeper reflection. Trouble in Tahiti brings about candid new ideas and critiques of love, materialism, and loneliness during a post-war era, concealed ostensibly by a perfect suburban world and unrealistic ideals of happiness. Each scene evokes different emotions from the audience as the music stylistically changes; Bernstein challenges his audience to find reasons to believe in the imperfections of the characters, to find them relatable, or to feel so far removed from them that you find yourself questioning your own life and life choices.