On February 5th, 2014, the marauding murle militias attacked my home village of Gwalla, killing 32 people and abducting 11 children. My brother and sister-in-law were among the victims who were innocently murdered by a raiding party. Among the abducted children were my two-year-old nephew (Makuei Makech), and three nieces, ages four, six and eight (Abiei, Ajoh, and Anyieth) were captured.

With the assistance of Ambassador Samantha Powers, three of the four children were returned to my family in late 2015. At the moment, my immediate goal is to find my oldest niece, Abiei, back to the family. Abiei is the child in white in the below photo.  This photo was taken about six months prior to her kidnapping. She is now 13 year’s old and believed to be in the town of Gumrk, which is in the Murle region.

During the search effort of the missing children, the contacts within the State Department and humanitarians organizations like UNICEF were crucial.  We have attached stories from the Globe and Huffington Post as background.

Abiei is the young girl in the center of the photo. 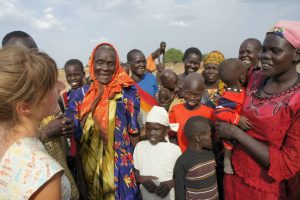 My friend Mangok looks like a typical South Sudanese young man, tall and lanky, though he’s grown in the fifteen years since our first meeting in Kakuma Refugee Camp in Kenya. He was resettled to the U.S. under the historic Lost Boys and Girls of South Sudan resettlement program in the early 2000s, and has since gone on to graduate from college, become a citizen and earn his master’s degree from Brandeis University where he now works. He has joined me on a number of important occasions in my life — my wedding, Passovers and other special moments — and not only represents one of the many successes of this resettlement effort, but also serves as a source of inspiration to me and all those who know him.

So it was with a knotted stomach that I recently drove to his home outside Boston to talk to him about the tragedy that had befallen his family. Like many Lost Boys and Girls in the U.S., Mangok had managed to reconnect with other family members who had survived the war in South Sudan, including his older brother. The brother had married and started a family, and was living in Mangok’s ancestral village when the recent violence escalated.

A few weeks ago, a large raiding party attacked the village and killed a number of civilians, including Mangok’s brother and sister-in-law. Added to this tragedy, the raiding party kidnapped their children, Mangok’s two-year-old nephew, and three nieces, ages four, six and eight.

The lights were dim and the shades drawn as I stepped into Mangok’s small apartment. Friends who had come to stay with him greeted me at the door. Mangok came slowly down the stairs, the weight of his brother’s death clearly upon him, but also filled with an urgency to find the children. He showed me a photo of his eight-year-old niece, smiling in a pretty white dress. Her mother stood in the background, holding her younger brother.

Mangok resolved to travel back to South Sudan to look for these children. The many friends he’s made since coming to the U.S. have rallied around him to assist. A fund was established to help with the trip and to support the children once they are found, and the Boston Globe wrote a story about the abductions.

Ambassador Samantha Power’s office saw the article and reached out to help. An affiliate of the United Nations Mission in South Sudan wrote that death, destruction and anarchy are rampant, the country is fractured, UN troops have been massacred and that getting the abducted children back would be like finding a needle in a haystack.

Taking all this into account, Mangok recently departed for South Sudan knowing that he may be risking his life, which has narrowed to this search. “The burden of freedom,” Mangok said, “is that you can’t endure someone else not having it.”

UNICEF estimates that there are 1.2 million children who are trafficked in the world, though the real figure is thought to be higher. In situations of conflict and forced displacement, abduction, trafficking and related dangers that children face increase. In some parts of South Sudan child abduction is a common practice, and with the expanding violence many more families and children may suffer the fate of Mangok’s nieces and nephew.

Mangok hopes that his efforts and the attention he might bring to this situation will help to stop future abductions. But more than anything, he just wants to find his family.

All of us who know Mangok feel a sense of loyalty to him because of his honesty and decency, intelligence and thoughtfulness. He meets the extraordinary hardships of his life with resolve, and in so doing he elevates others around him with a higher sense of purpose.