William Henry Drayton and the Meaning of Revolution

One of my broader intellectual goals in this seminar is to track down the origins of the term “American Revolution.” In other words, when did eighteenth-century Americans begin using the phrase to describe what they were about, and what meaning did the phrase have when they used it? Was it used solely in the traditional, astronomical sense to describe a turning or revolving in the mode of government? Or did eighteenth-century Americans also understand “revolution” as representative of a dramatic change in the condition of the world, a break with the past, and the beginning of something new? 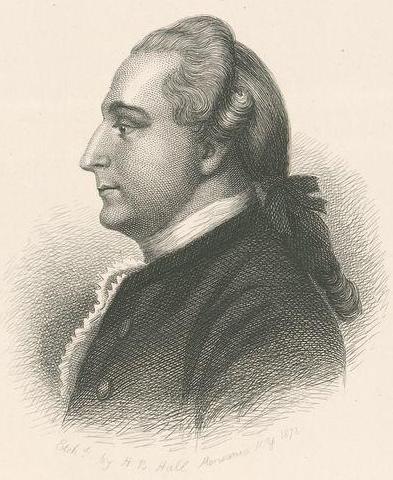 In the course of this search I encountered the writings of eighteenth-century jurist and South Carolinian William Henry Drayton (seen here in a contemporary engraving courtesy of the New York Public Library digital image collection.) Drayton was a classic southern aristocrat; born at his father’s plantation, Drayton Hall , in 1742, he spent most of his youth in English schools before returning to South Carolina to practice law in the 1760s. When the Revolution began, Drayton served in a number of key positions in provincial government, including the chairman of the committee of safety, chief justice of the South Carolina supreme court, and delegate to the Continental Congress. Drayton was a prominent participant in the American Revolution and his premature death in 1779 is perhaps the only reason his name does not loom large in the standard revolutionary narrative.

Among his few surviving manuscripts are two sets of instructions issued to the Charleston grand jury. The first set, written in April 1776, charged the jury with upholding public faith in the rule of law. King George, he argued, had “broken the original contract between King and People,” thereby forcing America to establish a new form of government. This new government’s legitimacy built on the historical precedent set by Britons themselves during the Glorious Revolution of 1688. It was also part of natural law: Great Britain had instituted a tyranny that “operated only to our destruction.” Independent government was simply a means of protecting the natural right to self-preservation. “Nature cried aloud… we have but obeyed.” In closing, Drayton informed his audience that the “late revolution of our Government” had legitimately severed any and all political ties between Britain and America.

In this first charge, Drayton demonstrated a classical eighteenth-century understanding of Revolution: it looked to the past for precedent and justification, it represented a turn (or return) to an alternate mode of governance, and it was part of the natural order of the world. It was clear to Drayton that a revolution had indeed occurred; a new compact was in place between the governors and the governed. And like heavenly bodies, earthly governments evolved and changed according to the rule of law.

Just six months later, however, Drayton issued another set of instructions to the grand jury that offered a marked shift in opinion. Rather than one more revolution in a series of historical revolutions, the American Revolution represented something new:

“A Decree is now gone forth, NOT to be recalled! And, thus has suddenly arisen in the World, a new Empire, stiled, The United States of America. An Empire that as soon as started into Existence, attracts the Blessing of God, to be the most glorious of any upon Record. This Revolution, forming one of the most important Epochas in the History, not of a Nation, but, of the World; is, as it were, an Eminence from which we may observe the Things around us.”

In this October piece, Drayton demonstrated a  re-purposing of the definition of eighteenth-century revolution. In the wake of the Declaration of Independence, Drayton began to believe that the American Revolution represented a break with the past and the beginning of a new natural order. Although still strongly linked to past events—indeed, wholly dependent on them for precedent and justification—Drayton increasingly emphasized the importance of a national, independent republic not beholden to the sovereignty of a monarch for its legitimacy. He placed great emphasis on this last point, reminding his audience that “Heretofore you were bound–by the American Revolution you are now free!”

Both the April and October jury charges were printed in contemporary newspapers, but the October version struck a chord with Americans. It appeared in New York, Pennsylvania, and New England newspapers as well as in the 1777 edition of London’s The Remembrancer. Drayton himself was so conscious of this new revolutionary narrative that he took the unusual step of publishing the October charges as a pamphlet entitled A Charge on the Rise of the American Empire. He also began compiling “an historic out line of the war… and the occurrences in this Country since the question of Taxation.” Convinced that the events in America were merely the first in a series of republican revolutions, he explained that recording the history of the American Revolution would ensure “that our Star shall be as brilliant as any in the new constellation by particularly placing its Revolution in the same page with that of its Sister Planets.” In this last, he deftly connected the old understanding of revolution to the new.

The text from Drayton’s two charges to the Charleston grand jury (from which this post quotes at length) can be found online here and here.

I am a Ph.D. candidate in History at Brandeis University. My scholarly interests include the American Revolution, slavery, and warfare in the eighteenth-century world.
View all posts by John Hannigan →
This entry was posted in Uncategorized and tagged American Revolution, definitions, primary sources, print culture. Bookmark the permalink.

4 Responses to William Henry Drayton and the Meaning of Revolution