Posted on December 9, 2013 by Cassandra Berman 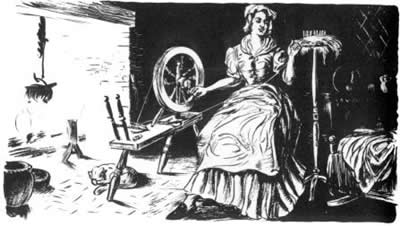 In our last seminar meeting of the semester, we focused on material culture, discussing the ways in which the study of “things” can deepen and nuance our understanding of revolution. I found this seminar theme particularly useful in complicating the relationship between public and private and between the domestic and the political. As historians such as Laurel Thatcher Ulrich have recognized, this complicating of spheres can provide access in particular to women’s lives and experiences (see, for example, Ulrich’s The Age of Homespun). As I reflected on this meeting, I thought about how my own research into portrayals of women in eighteenth-century newspapers might intersect with inquiries into material culture during the American Revolution. One of our readings, Leora Auslander’s essay “America’s Cultural Revolution in Transnational Perspective,” seemed a particularly good starting point for considering the ways in which material goods, print culture, and gender connected during the American Revolution.

Auslander examines the intersection of political change and cultural change during the Age of Revolution, arguing that in both the French and the American Revolutions, “aesthetic forms made manifest the essence of the revolutionary moment.” [1] Culture and politics thus informed each other, and material culture in particular had the power to convey allegiances. In America and France, one could quite literally wear one’s politics – as homespun cloth in the former, and as kneeless trousers in the latter. Auslander notes that while there were parallels between the politicized clothing in America and France, there were also notable differences: homespun signified a substitution of domestic, homemade cloth in place of imported British materials; the pants of the sans-culottes represented a refusal to wear a garment that suggested membership in the aristocracy. [2] Furthermore, the wearing of homespun and its home-based production involved women as well as men; kneeless trousers, on the other hand, could only be worn by men, and as they were not produced at home, women had little personal involvement in their manufacture. Auslander argues that this difference was important for how each revolution played out domestically. While the French Revolution never centered on politicizing the domestic realm, the American Revolution symbolized a “melding the public and the private” that emphasized the political importance of home and thus “gave women a specific political place.” [3]

Though this place may have been “specific” (the home), women’s allegiance to the homespun movement – and by extension, to revolution – was contested, and in a way that I see as explicitly gendered. Auslander acknowledges that women strove “to defend themselves against accusation that they were undermining the nation through their ‘innate’ taste for luxury.” [4] I would add that these accusations could be framed to not only question individual women’s political loyalty, but also women’s more general suitability for political involvement. The homespun movement certainly provided women space for a type of political participation that was not available to women in revolutionary France. But the popular rhetoric of homespun in America also suggests that there was considerable anxiety surrounding women’s political fitness.

Participation in the homespun movement was framed by some as a path to virtue. But the distinction between political virtue and sexual virtue could easily be elided, making disloyalty to the movement a breech of sexual mores and gendered expectations. This 1768 article from the New-Hampshire Gazette, for example, celebrates the elevation of women’s character and women’s contributions to society through spinning:

“Whenever I have the Pleasure of seeing a Knot of Misses busy at their Spinning-Wheels, I consider myself as in the School of Industry; and regard the most beautiful Part of the Creation not only as providing against the most dangerous Ensnarers of the Soul, but as contributing a Part to the Support of the Families to which they belong; & taking the most effectual Step to conciliate the Esteem of the considerate, sensible Part of our Sex.”

Those who spun were both contributing to their communities as well as avoiding the dangers of female idleness – the so-called “ensnarers of the soul.” Those who didn’t spin, however, fell prey not only to luxury but also to inappropriate sexual behavior, becoming “the airy Flirt, and the insidious Coquette,” fit only for “the Attention of the superficial Coxcomb….” [5] The refusal to spin, and to support non-importation through the homespun movement, could render women unfit for political participation as well as unfit for marriage. Political virtue and sexual virtue went hand-in-hand; refusing the homespun movement was tantamount, at least in this article, to ruining one’s chances for marriage.

Women could also intensify their allegiance to homespun by pressuring the men in their lives to commit to non-importation. In this 1769 letter published in the New-York Journal, its author devised the following plan:

“The Method I would propose to their consideration is, that the married Ladies, unite in one general Agreement, that they will respectively use their Influence (which is not a little) with their Husbands; not to rescind from that noble Resolution of Non-Importation, now subsisting among them.”

Wives, then, were urged to play a key role in the movement – an acknowledgment of a certain type of social, and perhaps political, power. Yet this letter, too, betrayed fears that women were unfit for the task because of their inherent desire for luxury. The writer went on to urge women to:

“…not only recommend it [the boycott] within the respective Spheres of Acquaintance, but will likewise enforce it by their own Example, of quitting the Use of those Tinsels and Gewgaws, and exuberant Fineries, which costs their Husbands much Toil in the Acquisition, and a serious Sum of Money in the using.” [6]

Women’s contributions to non-importation might have been politically important, but renouncing luxury also had the benefit of alleviating husbands’ financial burdens – burdens caused primarily by acquisitive wives, according to the letter writer.

Finally, women’s wearing of homespun could serve as a substitute for more direct political involvement – a passive demonstration against the Crown, as opposed to men’s more direct and active role as actual politicians. In a summary of a recent ball in Virginia in 1770, the Boston Gazette reported that patriotism was,

“most agreeably manifested in the dress of the Ladies on this occasion, who, to the number of near one hundred, appeared in homespun gowns; a lively and striking instance of their acquiescence and concurrence in whatever may be the true and essential interest of their country. It were to be wished that all assembles of American Ladies would exhibit a like example of public virtue and private economy, so amiably united.” [7]

In this piece, there was no mention of women toiling to make those homespun gowns, though this might have been implied by the term “homespun” itself. More striking is their “acquiescence and concurrence in whatever may be the true and essential interest of their country,” marking them as essentially passive participants willing to pitch in when needed, but not active political beings capable of truly revolutionary action.

These are but a few examples of the complicated, sometimes wary rhetoric surrounding women and homespun. Certainly there were a great many celebratory depictions of women’s involvement, as Auslander notes in her essay. But just because homespun provided an opportunity for the politicization of the domestic sphere, and gave women a “place” in which they could contribute substantially to a rather significant cause, does not mean that women were readily accepted as political actors. By examining the intersection of material and print cultures, then, it is possible to gain a fuller appreciation of both the opportunities revolution could provide, as well as the limitations it could reinforce.

I am a PhD student in the History Department at Brandeis University. My primary research interests include women, gender, and print culture in early America.
View all posts by Cassandra Berman →
This entry was posted in Uncategorized and tagged American Revolution, gender, material culture, print culture. Bookmark the permalink.