People, Sources, and Counterrevolution: Or, What to Do with Molly Brant

One of our seminar meetings last semester featured Kathleen DuVal, Amy Freund, and Emma Rothschild, who all shared work dealing with different aspects of “people and revolution.” In introducing her work, Kathleen DuVal spoke of the intrinsic appeal of biography when attempting to understand a significant event. By focusing on people, we can attempt not only to understand the event itself, but also to glimpse how people lived within that event – how they responded to it, how they influenced it, or simply how they coexisted with it. DuVal argued that the Age of Revolution was particularly ripe for a biographical approach to the study of events, in large part because the Enlightenment accentuated a focus on the individual, and on his or her perceptions of both their exterior and interior worlds. She then introduced her concept of “slightly important people” – individuals who have received little or no attention from historians, but who nevertheless allow us some new insight into the people and events that populated and punctuated their lives. They may be “slightly important” because of their occupations, because of the people with whom they interacted, or because of their accomplishments. But DuVal also suggested that this importance is largely connected to sources. People become “slightly important” when they leave behind a written record, allowing historians access to a life and an experience that would otherwise remain unknown.

But what happens when the sources just aren’t there? How else might an individual – slightly important or otherwise – enter into historical memory? This question has been on my mind for some time now, so I was delighted when the topic of people and absent sources entered into the discussion at our latest seminar meeting. The topic, counterrevolutions, also introduced the theme of people and counterrevolution, and we were tremendously lucky to have scholars Ada Ferrer, Marie-Hélène Huet, and Phillip Gould as our guests. All three challenged us to think more critically about our sources – to place them into a complex and evolving transatlantic context, to think about one piece in relation to an individual’s canon of work, and to interrogate the evolution of literary styles and symbols. But it was Ferrer’s work on the revolution in Cuba in 1812 that introduced me to the fascinating questions that can be asked – and in some cases, answered – when the source base is problematic. Or, as Ferrer demonstrates with the case of rebellion leader José Antonio Aponte’s book of drawings, when a key source may be missing altogether.

What, then, is a scholar to do? In the case of the Cuban rebellion, the absence of Aponte’s sketchbook does not mean that Aponte himself has been absent from the historical record, and it does not mean that he has been left out of (recent) historical inquiry. There are descriptions of the drawings, from Aponte himself, because Aponte was interrogated about his book before he was executed (though Ferrer points out that this source is far from unproblematic – with questions answered under duress, and a scribe mediating Aponte’s words). But the fact remains that historians have never seen the book – a fact that is inherently frustrating, but is at the same time (for me, at least), galvanizing.

Which finally leads me to a most intriguing – yet source-poor – counterrevolutionary figure: Molly Brant, a Mohawk woman who aided the British as an informant, most notably assisting in the British victory at the Battle of Oriskany in 1777. Using DuVal’s terminology, Brant could certainly be considered slightly important. She had influential family connections: she was the sister of war hero Joseph Brant, and the wife of Sir William Johnson, the Superintendent of Northern Indian Affairs. She lived in significant places, moving from her Mohawk village of Canajoharie (in present-day upstate New York), where her family hosted several important colonists, including Johnson, to Fort Niagara, where she helped maintain relations between the British military and the Iroquois. And without a doubt, Brant seized the possibilities the revolution provided her, transforming herself into a valuable, if unconventional, diplomat for Loyalist forces. Yet this slightly important woman produced no documents of her own. Like Aponte, she was important enough for her contemporaries to mention her, which has certainly helped carve out a (small) place for her in historical memory. In many ways she fits DuVal’s biographical imperative: she helps fill in the meaning of revolution, she allows us to understand war from another perspective, and most importantly, she provides insight into the opportunities that the American Revolution – or, perhaps, the rebellion – could create for an individual. And she fits nicely into Ferrer’s methodology, which refuses to be cowed by the absence of sources.

But what can we really do with Molly Brant’s obscure biography? If we are to accept that the lives of individuals can help us better understand the experience of (counter)revolution, then Molly’s role as a cultural and political go-between, representing both Mohawk and Loyalist interests, can give important insight into how the war allowed – or perhaps required – groups and individuals to reconstitute their alliances, and it demonstrates in particular how the Mohawk negotiated a changing political and strategic landscape. Through Brant we also see the opportunities that war could provide for women. But what else can Molly Brant do for us? What other questions should we be asking? How else can we mine sources, or constructively interrogate their absence? How can we rise to the challenges that she – and countless others – present? 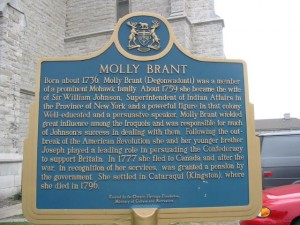 Plaque in Ontario honoring the Loyalist Molly Brant. Despite her “slight importance,” there are no visual representations of her.

I am a PhD student in the History Department at Brandeis University. My primary research interests include women, gender, and print culture in early America.
View all posts by Cassandra Berman →
This entry was posted in Uncategorized and tagged American Revolution, Counterrevolution, gender, Sources. Bookmark the permalink.

3 Responses to People, Sources, and Counterrevolution: Or, What to Do with Molly Brant