The Robespierre “Type” in Captain America: The Winter Soldier

Our excerpt of Julia Douthwaite’s The Frankenstein of 1790 and Other Lost Chapters from Revolutionary France closed with a persuasive argument that representations of Robespierre post-Terror birthed a new kind of villain: the Enlightenment-bred individual whose good intentions, we might say, pave the road to hell. Douthwaite writes that, “Villains of the early-modern age and the Enlightenment… operated within their own social milieu or sought to bring down the mighty” (227). A villain who comes from within the Left, who articulates Enlightenment principles, is a shock to the revolution and particularly, Douthwaite argues, to a society post-Terror. This is reminiscent of Foucault’s assertion in History of Sexuality, Vol. I that “Power is tolerable only on condition that it mask a substantial part of itself. Its success is proportional to its ability to hide its own mechanisms” (86). The “villain” who is ensconced within revolutionary ideology—who, as we discussed two seminars ago, perhaps goes “between” revolutionary and counter-revolutionary moments, engaging with alternate discourses and sympathies—is a potentially terrifying actor. 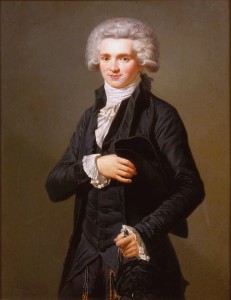 More than argue simply for the creation of a new type of villain, Douthwaite implicitly makes a case for why this type emerged. The text latently links the emergence of this Robespierre type to the creation of a unified Terror narrative; Robespierre’s legibility as a villain was arguably critical to grounding the Terror within a particular temporal frame. (Douthwaite spends much time chronicling historians’ debates over the Terror, which I will not get into here.) Robespierre emerged, Douthwaite writes, as an example of “ambition run amock,” an example that “ordinary characteristics shared by many of us… may cloak hidden malevolence” (224, 227). He was a lightning rod around which to construct a grand narrative that had an identifiable beginning and end.

However, Douthwaite also assumes that society learned to adapt to this new type of villain, that the society post-Terror was more skeptical (“nor does anyone trust in principles anyway”) (227). Post-Terror villains might look to lofty principles to defend their actions (e.g. the cliché “the end justifies the means”), but the people those principles are invoked on behalf of may not be as invested in the principles themselves, at least according to Douthwaite. This complicates her argument regarding the efficacy of these villains and the terror they invoke. If the power of Robespierre-like villains is in their ability to emerge from within the system and thus have the benefit of appearing to conform, and thus to surprise, how powerful are they if the people (or the audience) ultimately expect them to betray their “principles,” or to have never been fully faithful to them in the first place?

A recent incarnation of the Robespierre type is currently on the big screen in Marvel’s latest blockbuster, Captain America: The Winter Soldier. I want to suggest, here in a very limited space, that the character of Alexander Pierce is an example through which to further question how effective, or powerful, this type of villain is, all the while keeping in mind Douthwaite’s implicit argument as to why the Robespierre type emerged in the first place: as a character with which to ground, and offer an explanation for, a phenomenon associated with a particular system of power. (And here is my obligatory disclaimer for spoilers.) In Captain America: The Winter Soldier, it is not just that a villain is defeated, like in single title Marvel films such as Iron Man, or that a cataclysmic event is stopped, such as in The Avengers. Rather, a particular villain is seen to have had a hand in an entire system that was purportedly morally “good.” Indeed, for the first time in a Marvel film, destruction of a singular villain is not sufficient: the entire system—or the representative embodiment of that system—must be destroyed. However, whether the death of a “villain” or the destruction of an organization means that moral right has been restored is a (postmodern) question that remains unanswered. 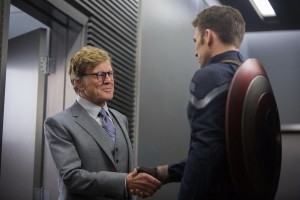 The “particular villain” in this case is Alexander Pierce (played by Robert Redford), secretary of an unnamed department (probably state) whose “good” intentions lead him to be involved with a secret organization, HYDRA. This secret organization festers within SHIELD, an intelligence branch of the United States government that until now has been largely seen as “good” within the Marvel universe. HYDRA’s goal is simple: to manipulate worldwide conditions so that humanity is willing to relinquish their freedom in the interest of their security; this calls to mind Benjamin Franklin’s oft-quoted line, that those who would sacrifice safety in order to secure liberty deserve neither liberty nor safety (Americanists, please correct me if I’m taking that out of context). The film is obsessed with the shadowy line between freedom and security, and, indeed, the ease with which HYDRA has assimilated itself into SHIELD calls into explicit question the purportedly straightforward missions of institutions; one of the main characters, Black Widow, is disturbed that she “can’t tell the difference” between who she’s taking orders from anymore. This explicitly blurs the purportedly clear moral framework in buzzwords like “freedom” and “safety,” words tossed around but which require significantly more nuanced attention than they receive.

What marks Pierce as the film’s villain is that he is largely responsible for masterminding, and ultimately pushing through, a mission which would massacre twenty million people worldwide. Singled out because of their electronic history, these individuals are selected by a computer algorithm and, according to Pierce, are merely being eliminated before they can become full-fledged threats. “If you could prevent attacks before they happen, wouldn’t you?” is the question he poses to the world security council. It’s like the Terror in a single day, on a worldwide scale, courtesy of twenty-first century technology.

At this point, villains from within are almost expected—it is not a surprise, narratively speaking, that Pierce turns out to be the leader of HYDRA. Rather, what stands out about Pierce is that he actually comes off as the epitome of the Robespierre-ian idealist. He never once articulates selfish motives but seems to believe wholeheartedly in the purity of HYDRA’s mission: world order at a terrible cost. He is even humanized: he has a peculiar gratitude to Nick Fury (Samuel L. Jackson), the director of SHIELD, for saving his daughter’s life decades ago, and when trading favors with Fury early on in the film, Pierce requests that Iron Man visit his niece’s birthday party. If Nick Fury is the redeemed man with a past, right down to the eye patch and billowing cloak, Alexander Pierce is the wolf in lamb’s clothing (or, rather, a politician’s suit), someone who fervently believes in the purity of his mission. What makes him frightening, perhaps, is his fervor, which, in our day and age, more closely resembles what the media calls the terrorist or freedom fighter.

Today, Douthwaite’s Robespierre type—the idealist from within, the one who turns against the nation in the purported interests of the nation—is perhaps best embodied by villains identified as terrorists (and notably, the film includes a subplot that blatantly tips its hat to Edward Snowden). Pierce is not identified as a terrorist in the film, but he fits the type: his death in and of itself at the film’s end is not seen as a sufficient end to the terror at work. This is commented on in the film: “cut off a head, two more will take its place.” The corruption of a government agency demands destruction of the whole agency, according to Captain America/Steve Rogers, and not just the replacement of corrupt individuals: this is represented physically by the destruction of a building. Captain America: The Winter Soldier enacts the fantasy of (literally) tearing down the entire structure. But however symbolic that may be (storming the Bastille or razing SHIELD headquarters), ideas are not held within a building, and physical containment, especially in the age of technology, is ultimately not sufficient to stop a perceived “threat.”

Captain America: The Winter Soldier is, ultimately, a commentary on the inefficacy of an ideological war (of a war on Terror), a commentary about how little physically marked places and people matter to the maintenance of power. It refuses the assertion that tyranny, or bad politics, or a terrorist organization, can be thwarted with the destruction of a building, or the death of one man. In the end, people are not the sole, sufficient, or satisfactory embodiments of ideology. This is the point historians make when they challenge accepted timelines of the Terror, or the explicit identifying of a Terror phenomenon that differed from other periods of violence throughout the French Revolution.

A few questions to conclude: how might we continue to think about this Robespierre type and its descendants, about its efficacy in our current culture and the skepticism of post-Revolution and, perhaps especially, postmodern audiences? Where do we see these examples most—i.e., are they most relevant when they are needed to somehow physically demarcate/contain uncontainable ideologies or phenomena? And of course, any continued comments on Captain America: The Winter Soldier and its relationship to revolutionary themes (e.g. on the fraught project of Captain America himself as a national icon, which there wasn’t room for here) are welcome.

Jeanna Kadlec is a doctoral student in the Department of English at Brandeis University.
View all posts by Jeanna Kadlec →
This entry was posted in Uncategorized and tagged captain america, french revolution, julia douthwaite, representation, robespierre, terror, Threads in the Age of Revolution. Bookmark the permalink.

1 Response to The Robespierre “Type” in Captain America: The Winter Soldier