Our final symposium of the semester featured Jill Lepore, Laurent Dubois, and Howard Brown, with each scholar addressing the broad theme of the “ends of revolution.”  In her talk, Lepore interrogated the ways in which the American Revolution has been appropriated and reinterpreted to fit current political ideologies.  Each generation, she explained, has used revolutionary rhetoric, symbolism, and even fashion to support a range of beliefs – from Martin Luther King’s invocation of the civil disobedience of the participants in the Boston Tea Party, to antiwar veterans’ march from Concord to Lexington in a “Peoples Bicentennial” in the 1970s, to our current Tea Party members’ donning of tricornered hats and insistence that their views are the legacy of the Sons of Liberty.[1]

Lepore’s talk got me thinking about how women might fit into this picture.  Of course, women are highly visible in today’s Tea Party (and Lepore’s New Yorker article on the same topic features an illustration of a tricornered Sarah Palin).   But what of the women of the revolution itself?  These historical actors have also been subject to political appropriation.  In this blog post, I would like to briefly analyze one particular work of historical interpretation, Elizabeth Fries Ellet’s The Women of the American Revolution, a three-volume biographical set published from 1848 to 1850. 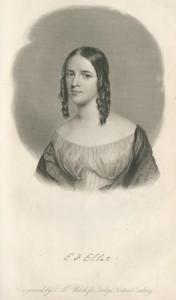 Elizabeth F. Ellet in an 1847 issue of Godey’s Lady’s Book, from the Library Company of Philadelphia

Ellet’s volumes contain over 120 biographies of both well-known women (like Abigail Adams, Martha Washington, and the cross-dressing soldier Deborah Sampson), and more obscure ones, like Hannah Gaunt of South Carolina.  A woman “of masculine proportions and strength,” Gaunt used her physical prowess to protect her father’s home from marauding Tories during the war.[2]  Historian Carol Berkin explains that “Ellet’s history was not a call for women’s political equality,” and that it drew upon nineteenth-century beliefs in woman’s “inherent moral superiority, her natural piety, her maternal instincts, and her domestic role….”   That is, it was a work that celebrated the contemporary ideals of republican motherhood and “true womanhood,” and inscribed these qualities onto women of the past.[3]  For example, Hannah Gaunt may appear to have challenged true womanhood with her “masculine proportions,” but once the immediate dangers of revolution were over she shed her gender-defying strength and distinguished herself as an exceptional wife and mother, “the kindest and most benevolent of women.”[4]  For Berkin, this affirms Ellet’s allegiance to the gender roles of her time: a woman’s duty to her family was such that if it was under threat, she could reasonably and admirably morph into “an Amazon in both strength and courage,” as did one Mrs. Merrill of Kentucky when she killed or wounded four Indian intruders with an axe.  But once that threat was over, she must retire as the warrior mother, and return to being the republican one.[5]

I appreciate Berkin’s observation that these revolutionary heroines were products of Ellet’s own time – just as the Tea Party’s Paul Revere is a reinterpretation, molded as much by current conceptions of politics and morality as by contemporary ones.  Berkin’s point, then, is reminiscent of Lepore’s.  But to follow through with Lepore’s inquiry into the political remolding of the revolution, we must recognize the potential significance of 1848, the publication date of Ellet’s first volume.  It was also, of course, the year of the first American woman’s rights convention in Seneca Falls, New York.  This confluence of dates could mean nothing; Ellet does not seem to have attended the convention, and we have no way of knowing what her reaction might have been to Elizabeth Cady Stanton’s Declaration of Sentiments, or to Stanton’s (very radical) call for woman suffrage.  But we do know, by way of a footnote in the edited papers of Stanton and Susan B. Anthony, is that Anthony herself turned to Ellet for assistance in 1860, when a woman fleeing her abusive husband sought asylum in New York for herself and her daughter.  Ellet helped conceal the fugitives, and Anthony wrote of the sensationalized case in a letter to Stanton.[6]  This might not bear much connection to The Women of the American Revolution, but it does indicate that Ellet operated in circles that at least overlapped with those occupied by the most prominent American women’s rights advocates. 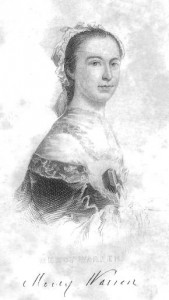 Mercy Otis Warren, the subject for whom Ellet felt her “deepest admiration,” according to Carol Berkin

In addition, the 1840s saw the passage of several Married Women’s Property Acts, with Ellet’s home state of New York enacting its version in April of 1848, about three months before the Seneca Falls Convention.  Though married to a South Carolinian in 1835, Ellet had returned to live in New York – without her husband, though still married – in 1845, the year before she began work on her biographies.  This was also when she began an allegedly “flirtatious” correspondence with the married (though far from reputable) Edgar Allen Poe.[7]  In New York, Ellet was living alone, at a great distance from her husband, and was corresponding freely with a married man.  One wonders what the possibility of increased rights for women might have meant to her, as a woman already defying convention.

By the time she was writing her 120 profiles of revolutionary women, then, Ellet was in a geographic location and in a domestic situation that challenged, and at times directly contradicted, the precepts of true womanhood.  Ellet’s proximity to Seneca Falls, her distance from her husband, her willingness to assist a woman fleeing domestic abuse, her association with Anthony, her access to new state laws modifying the strictures of coverture, and her correspondence with Poe may not have worked in obvious ways to shape to shape her writing.  In an article for the Journal of Women’s History, historian Scott E. Casper insists that even though Ellet “challenged the male understanding of history from within,” her depiction of revolutionary women did far more to affirm the primacy of domesticity than to question proscribed gender roles.   Casper acknowledges the publication’s chronological confluence with the Seneca Falls Convention, but quickly dismisses any consideration of its influence on Ellet’s writing because she never overtly “challenged the political, legal, or social structure of her day” – tacitly (and in my opinion, erroneously) suggesting that formal, organized agitation was the only way to state opposition to gendered restrictions.[8]

As I think about the project that Elizabeth Fries Ellet felt compelled to undertake in the 1840s, though, I’d like to heed Jill Lepore’s call for a more thoughtful analysis of the political uses of the American Revolution.  In doing so, it is necessary to question what exactly Ellet’s politics may have been – in a time before formal political representation was a reality for American women.  And while it would be irresponsible to conclude that Ellet’s own unconventional biography dictated the tenor of the biographies she crafted for The Women of the American Revolution, I am not sure that Berkin’s and Casper’s insistence that Ellet adhered to and celebrated accepted gender roles is any more defensible.  For as Lepore demonstrates, appropriation of the American Revolution is rarely a straightforward matter.

[1] Jill Lepore, “Tea and Sympathy,” The New Yorker (May 3, 2010).  Also see Lepore’s book on the same subject, The Whites of Their Eyes: The Tea Party’s Revolution and the Battle over American History (Princeton, NJ: Princeton University Press, 2010).

[7] “Elizabeth F. Ellet,” Portraits of American Women Writers That Appeared in Print before 1861, The Library Company of Philadelphia (available online at http://www.librarycompany.org/women/portraits/ellet.htm).

I am a PhD student in the History Department at Brandeis University. My primary research interests include women, gender, and print culture in early America.
View all posts by Cassandra Berman →
This entry was posted in Uncategorized and tagged American Revolution, gender, Politics, Women. Bookmark the permalink.