Sekuler explores art and the brain

On November 18, both art and psychology students were drawn to the Rose Art Museum to participate in a short tour and listen to Professor Robert Sekuler’s (PSYC) lecture “The Art of Visual Cognition” (hosted by Psych Club and SCRAM). According to Sekuler, the brain’s response to a work of art is virtually instantaneous. This is reflected in our museum experience, contributing perhaps to the 27 second average that museum-goers spend looking at a piece of art work before moving on. Just 27 seconds. This allows about a 10 second cursory glance and an additional seventeen to read the accompanying description. Sekuler described how aesthetic experiences activate certain areas of the brain, particularly the prefrontal cortex and the striatum, both associated with executive function, or our ability to make judgments. Research has also been able to identify a significant increase in the area of the brain’s sensory regions when an individual is looking at a work of art that they like.

Sekuler also discussed a study that examined visual preferences within which individuals were found to have a strong inclination toward certain compositional elements. He said that people specifically preferred looking at landscapes featuring mountains on the left, trees on the right, and a gathering of people and animals, though no conclusive evidence led to an explanation as why people enjoyed these elements over others. A simulated reproduction of the work including all of the preferred elements didn’t appear particularly appealing, and I could only think that individuals participating in the study wanted to look at something pleasant and easy to interpret. In Sekuler’s comparison of the simulated work to a 15th century Dutch landscape, it struck me as the kind of painting one might want to hang in their living room.

“Art at the Origin: The Early Sixties,” a current exhibit at the Rose curated by Director of Academic Programs Dabney Hailey, reflects the energy of a time period that challenged preconceptions of art. Emerging post-WWII from abstract expressionism during the late 1940sand 50s, minimalism and color field painting radically reduced the subject of the work from a complex surface to pure color and form. One of the pieces that Sekuler pointed out was Ellsworth Kelly’s “Blue White,” which hangs on the far right wall of the first floor of the exhibition. Kelly, an American artist and army veteran, focuses in his work on color relationships and abstract representation of organic shapes. In previous visits to the exhibition, I have often overlooked this work. The separation of simple blue and white shapes on the vast expanse of canvas can be less than inviting to a viewer unfamiliar with Kelly’s minimalist approach. In our group tour, fervent glances toward the door and a shuffling of feet began amidst the group as a few tentative comments were made. “It looks perfect,” someone said, “almost like it’s been manufactured.”

In looking closer at “Blue White,” however, the simplicity in Kelly’s work suggests far more than meets the eye. The intimidating perfection of the piece almost makes it inhuman; there are no visible brushstrokes, no subtle variance in the two colors. And yet it is the marked simplicity that envelops the viewer, drawing attention to the forms and contrast between the bright blue and white, capturing the fragmented glimpse of the relationship between shapes caught in time. Without the distraction of a reality-imbedded surface, the simplified image enters into a conversation of contrasts. It is embracing this aspect of the work that allows the mind to expand its horizons—no landscapes or mountain ranges in sight.

In viewing a work of art like “Blue White,” our brain may work against us. While it has been suggested that certain elements in art are preferred over others, it remains that every individual develops a unique aesthetic taste. We may not be able to control our initial reaction to art, but we can always learn more from looking. 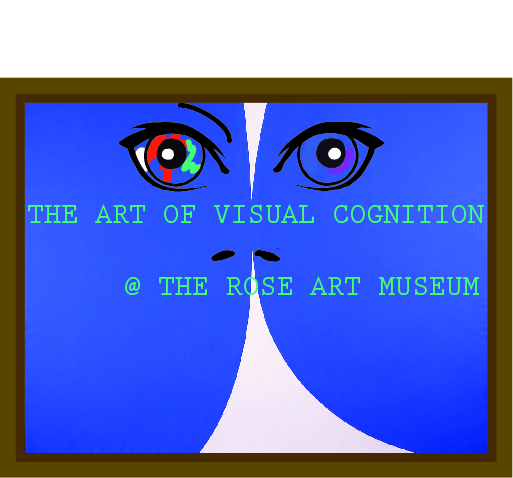 -Molly Channon ’14, Committee Member
This blog post appeared in The Justice on December 4, 2012.