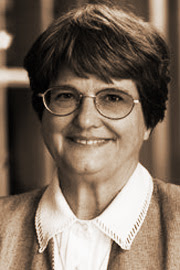 What’s it like to be sentenced to death—for a crime you did not commit?
Sister Helen Prejean—perhaps the most famous Roman Catholic nun in the U.S.—knows better than most. A spiritual advisor to death row inmates for more than 25 years, she’s also America’s most famous advocate for ending the death penalty.
In 1982, Sister Helen unexpectedly became the spiritual adviser to death row inmate Patrick Sonnier, convicted of killing two teenagers, who had been sentenced to die in the electric chair of Louisiana’s Angola State Prison. Witnessing his execution prompted her to write the bestselling Dead Man Walking: An Eyewitness Account of the Death Penalty in the United States (Random House, 1993), which became a movie for which Susan Sarandon won the Oscar for playing Sister Helen—and sparking a nationwide debate over the death penalty’s injustice.
Sister Helen says that 80 percent of those on death row live in the ten Southern states that practiced slavery, and that 80 percent of those executed are poor people who kill white people. “When people of color get killed in this country, it doesn’t even hit the radar screen in district attorneys’ offices,” she says.
Sister Helen is an electrifying speaker, whose paired sense of humor and sense of moral urgency make it clear why her work has helped transform American attitudes and laws. Her gripping talk at Brandeis’s Spingold Theater in 2006 was standing room only. The rare opportunity to hear her, live and in person, is not to be missed. Please join us as Sister Helen talks about the true costs of death row.
Sponsored by the Schuster Institute for Investigative Journalism, Peace and Coexistence Studies and Sociology Department
Contact person and email: Liz Eckley, lizm10@brandeis.edu, x63873