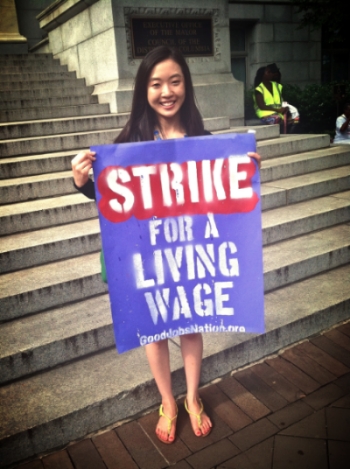 It has already been seven weeks since I first began my internship with the National Consumers League (NCL). It amazes me how much I have grown as a consumer and consumer advocate during this short period of time. During my first week, I was excited, nervous, and intrigued simply by meeting professionals who have made differences by advocating for consumers in major issues throughout the nation. I was proud to be working for the League in which Eleanor Roosevelt had been Vice President and for the organization that protected women’s rights in the famous Muller v. Oregon case. Now, I am also impressed by the extensive research and advocacy work I have taken part in throughout my internship. Every research project assigned to me has been a new and exciting learning experience. The research has not only allowed me to educate the average consumer about issues but also educate myself. I have definitely become a much more informed consumer, who is able to advise other consumers on issues including radio fraud, airline fee gouging, youth magazine traveling sales, billing aggregators, prepaid card use, and credit card fraud against charities. The NCL has given me the great opportunity to contribute to the fight against these practices that hurt consumers directly and indirectly.

Since my first week at the NCL, I have achieved my initial learning goals to learn how a non-profit functions and how NCL protects consumers’ rights. I have also learned how to execute an effective and meaningful research project. My research project on radio fraud has significantly allowed me to understand how to analyze an issue and carefully make conclusions. The radio fraud research project was intended to analyze whether certain radio advertisements were misleading, potentially misleading, or legitimate. While listening to the radio advertisements, it was important for me to carefully note what the companies were exactly advertising and what services they were clearly offering. Afterwards, I went on their official websites and compared the programs they offered online with what they were saying on the radio advertisements. I also read through the numerous pages of complaints reported to the Better Business Bureau and reviews that evaluated consumers’ experiences with the company. Although some radio advertisements may seem legitimate to the average consumer, some of them may be misleading. An advertisement that offers a free cruise may claim to be selective and completely free of any charges, but some consumers have reported that they were billed for extra programs they never signed up for or authorized. Consumers also had to pay additional hidden fees on board and attend long presentations, all of which were not explained in the advertisement. After carefully investigating into several radio advertisements, I wrote detailed reports that included my evaluation of the advertisement supported by consumer complaints. I expect that the reports will be useful during roundtable discussions and advocacy work related to radio fraud in the near future. After researching about radio fraud, I have become very cautious about misleading radio advertisements and compelled to warn consumers about potential scams.

One of the most memorable experiences I have had so far at NCL is striking against wage theft and companies’ use of pre-paid cards as the default payment method at the Ronald Reagan Building. Fellow interns and I supported low wage workers as they voiced their anger against prepaid cards that are associated with high fees for ATM withdrawals, PIN transactions, balance confirmations, customer service, and inactivity.  Before participating in the strike, I had done initial research about prepaid cards. Directly hearing workers’ calls for fair wages and respect was an incredible and influential encounter. I witnessed low-wage workers explaining that pre-paid cards only drive them further into poverty. In the second strike, one woman explained how she was illegally paid less than the minimum wage and had to pay additional pre-paid card fees, but was expected to support herself and her children. While I realized that I must learn how to further advocate for their rights, I also felt proud of my work at the moment. The employees that I shared brief conversations with showed their appreciation for our support with warm smiles. Following the strikes, we released a press release praising New York’s Attorney General for launching an investigation into retail practices. We hope other states will follow and protect the rights of low-wage workers. 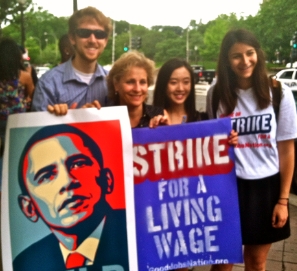 The unique experiences at NCL, such as meeting the former Surgeon General at the NCL’s Script Your Future Campaign event, combined with the short-term and long-term research work will help me to effectively advocate for consumers’ rights on campus. By utilizing the step-by-step process of organizing and promoting events and campaigns, I hope to organize campus events that will be engaging, inspiring, and informative. I will use the knowledge I have acquired at the NCL through research and first-hand experiences to effectively communicate with students, professors, and outside resources as I serve as the Undergraduate Departmental Representative for Politics, Legal Studies, and East Asian Studies this Fall semester. Before I head back to school, I look forward to learning and impacting more throughout the last few weeks with the NCL team.