“Give me your tired, your poor, your huddled masses yearning to breathe free.”

Sadness needs no translation. Sofia’s[1] rapid Spanish rolled over me in waves as I sat sunk into couch cushions. Beyond “Best Western” and “cleaning maid” I relied on another intern’s translation. In the cool of a church basement in East Boston, we absorbed Sofia and Isabella’s stories. They shared a common theme: each was injured at work, their employer denied the injury had occurred on the job, and they lost their jobs.

Massachusetts Coalition for Occupational Safety and Health seeks to advocate and help injured workers like Sofia and Isabella. Their worker’s center helps injured workers, who primarily hail from Boston’s thriving immigrant community, navigate the workers’ compensation system. This summer, another intern and I will be compiling a report on the Massachusetts workers’ compensation system. We are actively interviewing attorneys, 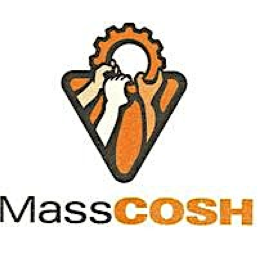 injured workers, and experts to explore the contributing factors in cases of delayed medical treatment and inadequate wage replacement benefits.

When a worker is injured on the job their employer is mandated to report the injury to the Department of Industrial Accidents and pay for medical treatment and lost wages through insurance. Most of the time injured workers receive benefits without a fight. However, this process often takes a different turn for Boston’s immigrant workers. The workers that MassCOSH assists are predominantly non-English speaking, undocumented, and earn on or below the minimum wage. These immigrant workers must sometimes face their employer and its insurance company in a prolonged legal battle in pursuit of payment for medical treatment and lost wages.

The state workers’ compensation system is a mesh of contradictory incentives and complex steps. Employers without workers’ compensation sometimes attempt to avoid fines by leaving injured workers at the hospital and denying any responsibility or relationship. Employers with insurance also sometimes try to deny responsibility to avoid increasing insurance premiums. Conversely, some workers fake an injury to dishonestly collect benefits. Additionally, both lawyers and insurance companies are driven by profit incentives on opposite sides of the fight, decreasing opportunity for negotiation. 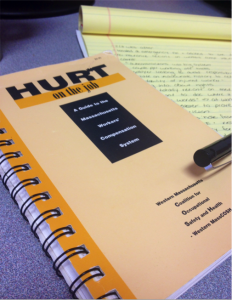 This legal battle hurts everyone involved. Injured workers’ health deteriorates as treatment is delayed, which increases the cost to the employer, insurance company, and state. Many injured workers already face socio-economic disadvantages such as minimal education and an inability to speak English. When you consider the financial power of employers and insurance companies it truly becomes a David and Goliath fight.

Over the course of this summer we are collecting testimonies from various individuals connected to the workers’ compensation system. Lawyers and experts have proven enthusiastic to share their frustrations, each with their own specific grievances. We also intend to collect approximately fifteen worker testimonies to give our report a human touch. We have met with government employees from the Department of Industrial Accidents as well as individuals in the Occupational and Safety field. We hope to gain a holistic and balanced perspective of a system within which injured workers have so much at stake.