It had just finished raining when my plane landed at Edinburgh airport in Scotland; the runway was covered in small puddles and the air felt damp with that after rain musk. But the sky was clear and blue and a wonderful signal that my drive to St Andrews would be dry and my luggage wouldn’t get soaked. And that’s when I learned that the Scotland sky is a liar. It can always rain.

But St Andrews is old and beautiful, home to the ruins of a castle and the creatively named University of St Andrews. The university has a long list of titles (the oldest university in Scotland, Prince William attended this university and met Kate here, etc.), but most importantly (or at least most relevant to me and you the reader), they also house the SACHI research group in their School of Computer Science. SACHI is a catchy acronym for St Andrews Computer-Human Interaction, where they perform research into innovative technologies to aid in the daily life of people. Computer-Human Interaction, or HCI, is the “people-person” of computer science; we focus on the applications of developing technology rather than the theories and algorithms behind much of computer science.

This summer I’m working with Dr. Uta Hinrichs on updating the Speculative W@nderverse, an international research project between computer scientists and literary scholars at the University of St Andrews and the University of Calgary. This project explores the potential impact of early science fiction stories on the development of the genre through the use of digital visualization tools. Its focuses on the “Bob Gibson Anthologies of Speculative Fiction,” a unique collection of thousands of sci-fi stories. I’m designing, implementing, and evaluating a novel interactive web visualization to help literary researchers investigate the role of pulp magazines and periodicals within this vast and unique collection.

To summarize, I’m developing a visualization to explore and understand all of these hundreds of anthologies. Information (or data) visualization is the limbo between the intersections of computer science, graphing, statistics, psychology, and design. Robert Kosara explains it more eloquently in his post.

Dr. Hinrichs has been developing the Speculative W@nderverse long before I arrived here; here’s a screenshot of the interactive visualization: 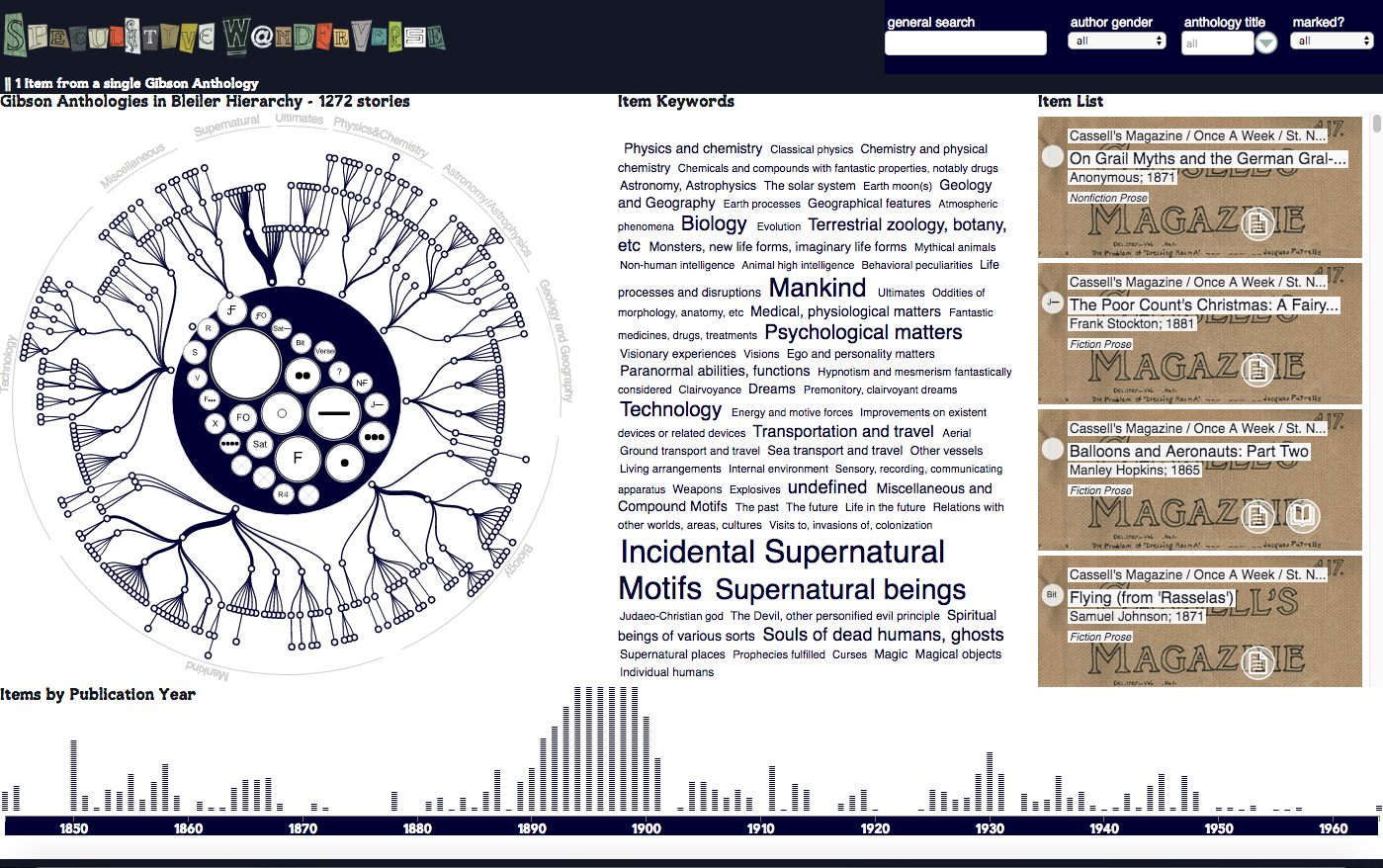 My work is going to be added to the existing site. Here is a very preliminary exploration of the data that I created in this first week (showing the categories of science fiction themes and each anthology’s inclusion of these themes): 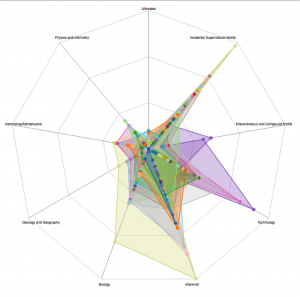 It certainly fulfills the graph aspect of visualization (and has wonderful colors), but is useless for exploring the data in terms other than the themes of each anthology. But I have two and a half months to go, so I’ll improve my design and software development skills during this time. I’m excited to work alongside experts in the field and become more familiar with research practices in computer science, human-computer interaction, and information visualization. And while I learn from the graduate students and faculty here, I hope to make more personal connections and friends. And hopefully by the end of the summer I’ll learn how to understand the temperature in Celsius.