For the last month, every conversation that goes on long enough will eventually reach the topic of politics, except rather than American politics, which I’m confident speaking about, these conversations tend to involve British politics. This is in the wake of the recent referendum in which, with a margin of two percent, the UK voted to leave the European Union (I used this to help understand what happened:  http://www.bbc.co.uk/news/uk-politics-32810887).  The aftermath has been chaotic, and despite my opinions on the topic, the experience has been a crash course for British politics.

These conversations mostly happen over lunch or coffee breaks, during which one person will stand up and ask everybody else in the office if they would like to join for tea or coffee.  The huge group that would then migrate to the kitchen includes people of all different levels in the “hierarchy” from the undergraduate researcher to the post-doc or lecturer.  It was difficult getting used to talking so casually to supervisors, but getting to know everybody has made me more comfortable with my position in the group and I’m not as nervous speaking with the supervisors.

And of course, I work and have my weekly meeting with my supervisor.  Our meetings have progressed since I first started working. What began as brainstorming sessions, taking influence from similar projects like http://mariandoerk.de/edgemaps/demo/, have become more status update sessions and refocusing my direction as I take some form of ownership over the project.  Though, obviously, she has the final say, I’m not worried about bouncing different ideas by her or disagreeing with her.

Because I work on the project every day, there are occasionally unforeseen issues that come up.  And if these issues are small, I manage them myself according to my own judgement, which is unfortunately occasionally flawed.  I enjoy the weekly meetings for the feedback.  While most of the time the feedback involves smaller tweaks to the work, sometimes we come to the conclusion that I’m going in the wrong direction (such as when I wanted to incorporate a timeline into the visualization).  That was difficult at first, taking a chance and being wrong, but I’ve stopped seeing these ventures as wasted time.

Very rarely are ideas entirely wrong, they’re mostly just inappropriate for the problem I’m solving or the current situation.  I’ve begun to write down most of my ideas for later use or to use for a different project. I’ve come back to some of the first ideas after I hit a wall. Even if I don’t use the exact idea, it puts me back in the mindset I had when I was first coming up with the concept, which is nice when I forget the idea and focus on some tangential part.

Here’s one of the earlier sketch ideas that were scrapped, but later used for parts of other parts of the project. 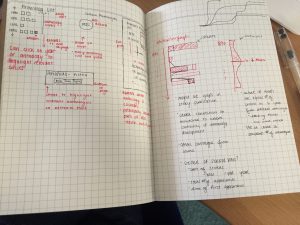 I’ve started to use this “write down” thought process for things outside of work.  Here’s the page for this blog post: