What is social justice?

That was a question I asked myself often my first year at Brandeis. I knew an answer, but only in its most abstract form–social justice means breaking down barriers and creating a fairer society.

It’s a question that only gets more complicated the more you begin to understand it.

This summer, I wanted to be one step closer to gaining a more concrete understanding of that imprecise concept of “social justice” and everything fell into place with Interfaith Worker Justice.

From Day 1 IWJ’s simplistic but effective purpose, uniting labor and religious communities to address egregious workers’ violations, resonated with me.

As I put together material about effective organization strategies and the ways that congregation leadership can advocate for systemic and deliberate change, I have begun to realize my own biases and how I can best address them in my peers and colleagues.

For instance, when my supervisor was talking to me at lunch, she mentioned one of the first action initiatives of IWJ was about advocating for poultry workers. I was confused, why poultry workers? As she talked about some of the daily occupational hazards that poultry workers face, I realized how much of their narrative had been erased. As a society, we know on some level about the way chickens are treated in the poultry industry, but largely turn a blind eye to the workers in the same situation. (more on this)

Further religious readings that I summarized as informative material to be distributed helped me to conceptualize these egregious injustices, and how faith can provide both a clarifying lens and a call for action.

This first week, I’ve also been thrown full force into helping organizing an event called Seminary Summer that helps seminary students learn skills to be effective advocates for workers’ rights. I’ve been excited to see the event slowly but surely come together and I’m excited to see the final results.

I also had the opportunity to attend my first staff meeting and understand how what I was doing within the organizing department fit within the framework of the work of my other colleagues. Through the feedback I gave and received, I felt that I understood the purpose of the work that I was doing.

And, this may be silly, but I’ve been happy to have my own cubicle, especially one with a couch. It makes the office feel a little more home-y. Not to mention, since the IWJ office is on the fourth floor of a church, I can say that I go to church regularly.

Bad puns aside, I’m excited for the opportunity to continue to be involved and organize meaningful events that shape both the future of IWJ and individuals who will use what they’ve learned through IWJ to make a difference in working communities across the country.

But this introductory post wouldn’t be complete without me touching upon what it’s been like so far to live in Chicago. It’s only a short while and I am still impressed by the ease in which I’m able to commute to work (the L is great, you’ve heard it here first), and the atmosphere of the city—particularly the area that I work. 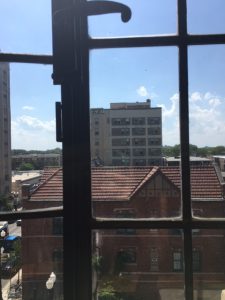 (the view from my cubicle)

I look forward to these coming weeks!