I have just concluded my first week interning at the Middlesex District Attorney’s office (MDAO), and I’ve already learned more than I could have anticipated in such a short period of time. The MDAO office consists of prosecutors and public servants designed to help effectively prosecute cases and provide prevention programs and partnerships for the community. (A list of those programs and areas of prosecution can be found here.) Since last Wednesday, I have been working in my own office on the first floor of the Woburn office alongside with legal interns, an administrative assistant, and Assistant District Attorneys (ADAs). My internship assignment is with the Malden Superior Court, so my assistance in the Woburn office has been focused on cases related to the Superior Court division, which handles serious criminal crimes with possible prison sentences of more than 2 ½ years (more info on differentiating the Superior Court from District Courts can be found here on the DA’s website!). So far, my biggest assignment with this office has been reviewing jail calls by a person incarcerated at a House of Corrections facility who is awaiting trial. My job is to listen to the records of his jail calls from visits and recreation phone calls to see if the inmate admits to the crime or leaves hints about his crime or other crimes he may have been involved in. These notes will eventually serve to assist the ADAs in their investigation. I listened to over 100 calls so far from 3 CDs! Each CD contains about 22 hours of footage, and I included a picture of them below: 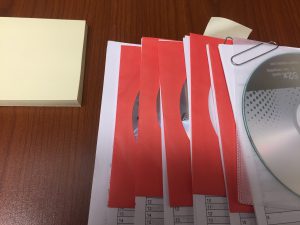 After spending a few days here in Woburn, I realized that I am very interested in observing how the court process works, so I asked my supervisor if I could attend a few days of my internship at the Malden District Court (featured above), and now I will be working there three days a week (with the remaining two days at the Woburn office). Yesterday was my first day, and the moment I stepped in, I witnessed 12 pleas in three different court sessions. The ADAs were constantly moving, and it was fascinating to watch them conduct each session. It was also the first time I ever heard a criminal plea, and by the end of it I could recite the informational requirements the Judge gives to each accused before he gives his plea (Otherwise known as Criminal Procedure Rule 12 subsections a through d, found here.) It was perfect to analyze the court system and learn about pleas directly from the judges, accused, Defense Attorneys, and ADAs themselves. 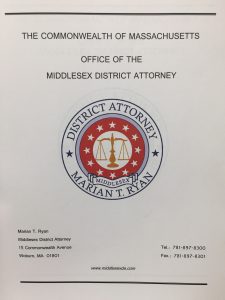 Following court, I was given a desk at the ADA’s office, and within four hours, I had already assisted with case research and case filing for three different attorneys. All of this help went directly to their case files, which affects how the cases will be treated moving forward and how they will be filed in the District Court system. I was also told that the next time I go to court, I will be helping organize more of their case files while I watch the trials. This way I’ll be able to help the attorneys better access the research they need for trial while I learn about how the trials work by observing.

This internship experience has so far met my goals to learn about the role of the Prosecution and objectives of the DA in defining justice above and beyond, and I’m very excited for the next few weeks for me to get involved in more in-depth projects and see how much more I can be involved in. I began this internship with the intent to learn more about prosecution and the DA, but I also wanted to fully immerse myself in the experience so that I could learn about areas I didn’t previously know about. After just one week, I’ve already learned about prisons systems (from the inside), the role of detectives at crime scenes, the role of judges, appellate courts, and members of the DA office like Victim/Witness Advocates that I work alongside in my office at the court. Featured above is only one of three folders that I’ve received from my supervisor filled with information about criminal justice, the court, the DA office, elements of crime, etc. Everyone is eager and willing to help and talk with me whenever I have questions, and I’m excited to start my next week to see what else they have to show me!