My name is Gabriel Fontes. I am an aspiring high school English teacher and this summer I am interning with New York Communities for Change. NYCC is a community organization dedicated to preserving affordable housing, good jobs and living wages, holding Wall Street accountable, and pursuing education and climate justice. NYCC was a lead organization in the “Real Affordability for All” coalition which helped win a landmark victory for affordable housing last year and a lead organization in New York City’s successful “Fight for 15” campaign which secured a $15 minimum wage for fast food workers.

I am situated in the Labor Organizing Division of NYCC. We fight wage theft, inadequate wages, confusing and unfair scheduling, unsafe working conditions and more. I have been working with organizers who are based primarily in the Flatbush neighborhood of Brooklyn, working with Latino immigrants. I have been working through our phone lists, checking in with members and encouraging them to attend our various actions. For instance, on June 19th, we traveled to Albany to advocate for the passage of S.2664, a bill which “Requires car wash workers in a city with one million or more to be paid the minimum wage without allowance for gratuities.”

On June 12th, we held a rally outside of the Federal Reserve office to urge New York Federal Reserve President, William Dudley, to vote against raising interest rates. Dudley is one of 12 regional presidents, four of whom are former Goldman Sachs executives! Why should Goldman Sachs be making decisions that affect real working families? The economic recovery from the great recession has not yet reached low income Black and Latino communities. Higher interest rates will decrease wages and hiring and make debts more expensive. We were there to make our voices heard and raise awareness on the upcoming vote. 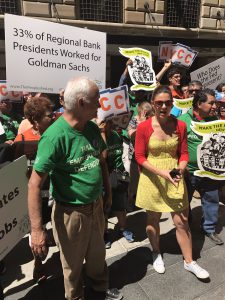 These are just two of the dozen actions that NYCC has led in the two weeks I have been here. To keep up to date visit: http://nycommunities.org/actions or follow us on twitter @nycommunities.

Most of the conversations I have with members are in Spanish, which has been a welcome challenge for me. Spanish fluency is just one of many critical skills I hope to gain this summer. I decided to work at NYCC after reading about community organizing approaches to educational justice in Professor Wallace’s course, “Critical Perspectives in Urban Education”. For instance, the Logan Square Neighborhood Association in Chicago, created a program called Nueva Generacion which trained community members to become bilingual teachers. Their model was so successful that it was replicated across the state of Illinois. How inspiring!!

In my future career as a teacher I hope to mobilize students and their families to advocate for better services, culturally relevant pedagogy and more. To this end, I hope that my time at NYCC helps me to gain interpersonal community organizing skills and knowledge of macro-level campaign tactics.

It is with great gratitude that I begin this journey. Thank you to all the folks at NYCC who have generously mentored me and the generous support of all the folks at the Hiatt Career Center, particularly Sonia Liang, who believed in my vision for this summer.