For the past month and a half, I have been working as a research assistant at the University of Washington School of Dentistry, in the Department of Oral Health Sciences. Leading up to my internship I was both excited and nervous. Up until two days before I started working, I didn’t know what I would be doing and how involved I would be in the research process. To my surprise, my first task on the job was to write a literature review which would then be used as the introduction to a manuscript submitted for publication. I hadn’t received much guidance, other than that the topic of the paper was going to be dentists’ perception of fluoride refusal. With that in mind I started researching the topic on PubMed, looking for any previously published paper regarding fluoride refusal.

As I learned more about fluoride refusal in dentistry, I began to understand the impact fluoride has on various communities. Water fluoridation typically has a larger impact on lower income communities and communities with little access to adequate dental care. Since fluoride is used as a preventative measure aimed at reducing dental caries, it is most prevalent in areas with worse tooth decay. As a result, refusal of fluoride, specifically water fluoridation can have severe impacts on some of the more vulnerable populations.

Learning about and better understanding some of the many issues and consequences regarding fluoride refusal has exposed me to the impact preventative public health measures have on underserved communities. Opposition to fluorides is a social justice issue that needs to be addressed. Fluoride refusal negatively affects those more vulnerable, creating health disparities among those receiving fluoride and those unable to. Fluoride refusal often stems from misconceptions regarding its impact on health. Similar to immunization refusal, the reasons people refuse fluoride are often unfounded, leading to a potentially more dangerous public health outcome. Since dental caries are more prevalent in underprivileged communities, this paper will hopefully bring awareness to opposition of fluorides as an important social justice issue that needs to be addressed by mainstream media and government. 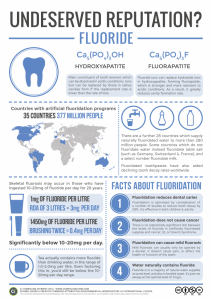 Throughout the summer I will be working on finishing up writing this paper with the hope of submitting it for publication. I hope that by publishing this paper there will be a better understanding of the importance of fluorides in preventative dentistry. In order to do so, I have analyzed data sets, researched the topics further, and begun writing the results and methods sections of the paper. By learning how to write a research paper at the level needed for publication, not only will I gain tremendous experience and knowledge regarding the research and writing process, but I will also contribute to the work of my mentor.

As the halfway point of my internship nears, I can already say I have gained an immense amount of knowledge and appreciation for the work needed to conduct and write a research paper. During the second half of my internship I look forward to gaining a better understanding of the steps required to achieve publication as well as learn more about data collection, analysis and research. By the end of the summer I hope to have gained the skills needed to delve into future research projects with ease and confidence. I look forward to working on further research projects aimed at reducing health disparities in dentistry.