I’m back this week to answer the prompt:  What have you learned at Brandeis that informs your thinking about your organization’s work?

In 1934, Franklin D. Roosevelt founded the Federal Housing Administration (FHA) as part of the “New Deal” effort to bring the United States out of the Great Depression. The FHA was created to issue and regulate mortgages and allowed millions of Americans to afford a down payment on a house for the first time. Unfortunately, millions of Black Americans were shut out from the dream of home ownership due to a discriminatory practice called redlining.

The FHA created “residential security maps” like the one shown below to determine which neighborhoods were eligible to receive low-interest loans. Low-income majority minority neighborhoods were outlined in red ink indicating that they were “high risk.” High risk neighborhoods were outright denied loans or were only eligible to receive high-interest, short-term mortgages. A 1938 FHA manual even explicitly instructed banks to steer clear of areas with “inharmonious racial groups” and pushed local governments to create zoning laws that enforce racial segregation. In the words of Ta-Nehisi Coates, “The Ghetto is Public Policy.” 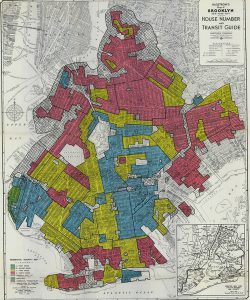 Further reading: How We Built the Ghettos – Jamelle Bouie 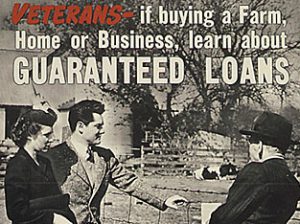 The GI Bill is credited by many experts as establishing the American middle class by providing a number of services to veterans including generous low-cost mortgages, low-interest loans, unemployment compensation, job training programs and college tuition and fees. Overall, the bill was a tremendous success, helping over 16 million veterans attend college, receive job training, start businesses or purchase their first home.  However, in the words of historian Ira Katznelson, the GI Bill was “deliberately designed to accommodate Jim Crow.”

Take the state of Mississippi: By October 1946, 6,500 former soldiers had been assigned jobs by the state employment service. 86 percent of the skilled and semiskilled jobs were filled by white people and 92 percent of the unskilled jobs, by Black people. Between 1945 and 1960, only two of the 3,200 loans provided were given to Black veterans.

However, this was not just a Southern issue. Housing discrimination was rampant in the Mid-Atlantic and New England regions. In New York and New Jersey, “fewer than 100 of the 67,00 mortgages insure by the GI Bill supported home purchases by nonwhites.”

Homeownership has been the primary path for millions of Americans to accumulate private wealth. Today, seventy-three percent of white people own a home, compared to only 45% of Black people. The average white homeowner’s house is worth $85,000 compared to only $50,000 for the average Black home. The average Black household has only 6 percent of the wealth of the average white family. These disparities are an inevitable result of the discriminatory implementation of the GI Bill and the Federal Housing Administration.

At NYCC I work with community members who are fighting back against “urban renewal” or “redevelopment” plans that accelerate gentrification. The progression of these projects is pretty formulaic: First, a corporate real estate developer funds a local politician’s campaign or otherwise buys them off. Next, the politician gives public land and taxpayer money to the developer to build luxury condos in rapidly gentrifying neighborhoods. For an example of this phenomenon please read this report on the Bedford Armory Development project in Crown Heights.

What I learned at Brandeis helps me understand that these gentrification projects are not a new phenomenon. They are merely another manifestation of state sanctioned racial housing discrimination. People in power will always uphold the status quo unless pushed to do otherwise.