For this post, I will be talking about the effect studying at Brandeis has had on how I approach my internship.

The connection between them isn’t always obvious–hence the dearth of cross-listed classes compared to other disciplines. But the way I’ve always seen it is that both seek to understand and generalize behaviors writ large. Politics is understanding systems. We talk about the ways other nation states interact with each other, and how they straddle the line between order and anarchy. Psychology, on the other hand, focuses on individuals and to the extent to which human behaviors and predispositions affect our perception of the world.

I’ve found an interconnected approach is an important part of organizing. Because, specifically relevant to IWJ, while talking with the religious congregations, organizations and corporations, it’s important to know the right people to target. An action is as successful as the allies you acquire and the extent to which you are able to quantify and exhibit successes. Having demonstrable goals makes victories relevant to the cause of social justice.

A few weeks ago, I participated in Seminary Summer, straddling the middle ground as a participant and observer. I learned about the variety of inequalities faced by individuals in the labor market and the way non-profits and religious organizations are speaking out.

One example stuck out to me. We were given an issue of wage theft and were given time to brainstorm with a partner the most effective way to address this injustice, and how to incorporate religious communities. Knowledge of political science helped me to vocalize what systems I should be targeting and what structures were in place to encourage, or more often than not discourage, systemic change. But knowledge of psychology made me think what would be the most effective way to approach people for my desired result. 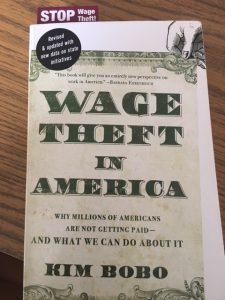 (Some of the reading I’ve done at work. Learn more here.)

Since Seminary Summer, I’ve spent time putting together details for our National Convening. In this, I’ve drawn upon my extracurricular experiences at Brandeis. Being a debater and learning how to speak succinctly and persuasively has aided me in crafting scripts to message and interact with IWJ donors and affiliates about our upcoming National Convening–in particular, encouraging allies to come to a photo exhibit we’re hosting with the work of David Bacon.

If you haven’t seen his phenomenal and moving work as a labor activist and photojournalist, his website is available here.

The following is one of his powerful images: 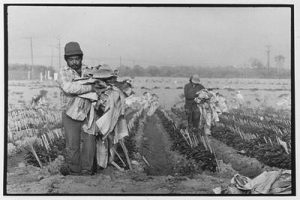 Overall, I’m grateful that Brandeis has improved my analytical and persuasive abilities and I have them come to play as I prepare for the next major event of my internship.