The goal of the MCAD is to investigate, prosecute, adjudicate and resolve cases of discrimination. This is accomplished through an in-depth investigative process conducted by each investigator to ensure that the correct determination is made and justice is served.

As an Intake Specialist, I initiate the 18-month process that begins once a complaint is filed with the MCAD. As a neutral organization, our role is to investigate possible discriminatory acts, and propose probable cause or lack of probable cause findings to the commissioner. This investigatory process includes review and analysis of the original complaint, a position statement from the respondent and often a rebuttal from the complainant. Additionally, for all cases except those that deal with sexual harassment, an investigative conference is held to produce additional information to support the case. In order to be deemed a “probable cause case,” the investigator must be able to illustrate how the case meets the requirements of the PFC- Prima Facie Case.

Not only does the MCAD investigate walk-in cases, we also have an entire testing department whose sole purpose is to uncover discriminatory practices within the community. This testing includes cold calling employment, housing and public accommodation facilities while posing with identities that fall under multiple protected classes. The goal of this unit is to asses these organizations and eliminate discriminatory practices before they affect the community.

Additionally, while the MCAD investigates singular discrimination cases, often we receive multiple cases against the same respondent. (Interestingly, we often see an abundance of cases against dental offices). In this instance, the overall benefit of the community is brought into perspective, as the MCAD holds the respondent accountable. Often, this means sending the case to court and refusing to settle in order to ensure that it becomes part of public record and is known to the larger community.

Progress takes many forms. While on the surface the MCAD focuses on individual cases, it is then those cases that become the building blocks that lead to the larger mission of eradicating discrimination. However, it is due to federal funding from both the EEOC (Equal Employment Opportunity Commission) and HUD (U.S Department of Housing and Urban Development) that the commission has the authority and jurisdiction to investigate and enforce discrimination laws.

One aspect of working for MCAD that I enjoy the most is the team building environment that they promote. While there I am not just an intern, but an integral part of the larger mission and goals of the organization. The picture on the left below is of me and my fellow interns. 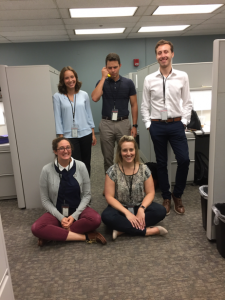 It is with their help working for the enforcement and housing departments that the MCAD is able to maintain their large case load. Underneath that is a picture of me with two investigative officers. We are all part of the continuous process towards accomplishing our social justice goals and promoting future progress towards eradicating discrimination. 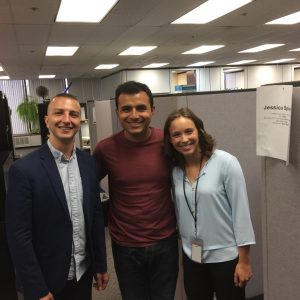