My first week at Boston School of Public Health was quite the interesting one – even my first day was very exciting. I am researching firearm violence and specifically looking into police shootings. I believe this topic is very relevant and important to spend money and time on given the current state of America. I work under Dr. Siegel and with two other interns who are also in college. We are looking at shooting by state and ultimately attempting to link lower rates of police shootings with stricter gun regulations in that state.

We are at the first stages of this project, so we are focused on looking into why police shootings happen. Racism is one of the biggest causes and motivators behind fatal police shootings, so we are gathering data to document and prove systemic racism in each state. This topic is a necessary one to asses because it has caused such harm and damage to American society. To my surprise, there is not many public health articles showing the correlation between racism and adverse health outcomes, and we are the first people to research this specific issue. There is also no comprehensive database breaking down clear statics of systemic racism on a state level, so we are also the first to do this. We plan on creating an extensive database assessing racism each state by looking at factors such as education, incarceration, segregation, and unemployment. Within the past two weeks, the team I am working with has been collecting data on these topics. There are not many primary sources that document this so we’ve been mainly having to use the census, which can be very time-consuming because there is so much data in the census. We hope that having this completed database with help to combat racial issues, specifically police shootings.

My first day I was told to find the statics of people incarcerated, broken down by race and state. I was shocked to find how little information is out there. The Bureau of Justice only had data on years 1994-1998, 2005, 2015. This is one of few reports that had the information we needed. This is clearly a topic that needs more attention and needs to be better documented by federal organizations. For the other years, I had to go to the censuses and search for numbers state by state and do some math.  This website coded the census, making it fairly readable. This is pretty time consuming and took a full day to do one year. The data found was pretty disturbing, but unfortunately not surprising given how problematic the justice and prison system is. All the state had drastically higher percentage of the Black population in prison compared to the White. The next day I was alarmed to find that the Bureau of Justice had completely shut down its website and was forced to start on an other topic and hope the website would be back to running soon.

I find this work to be importation, and since it is a cause I care about and deeply worries me, I do not find spending hours searching through and analyzing data to be boring. I also enjoy the people I work with and my boss has had many interesting and important projects that have had very important effects on public health and has also focused on marginalized groups.

Here is some examples of the work that I analyze, the top photo is data from the 2010 census and the bottom photo is some of the reading that I was assigned to prepare for the project. 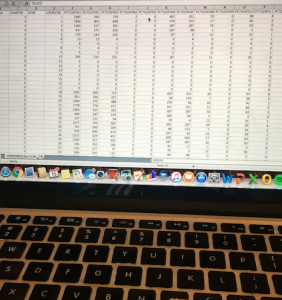 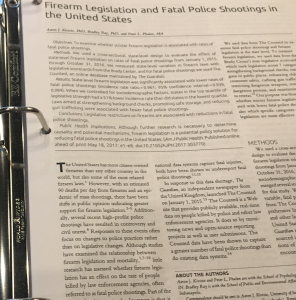