This past weekend was IWJ’s National Convening, and being a staff member for the event has made me realize both the necessity of and the labor that goes into national coalition gatherings.

Currently, IWJ has been going through a period of transition, in terms of leadership and overarching objectives. Thus, there are important discussions to be had about the means of implementing IWJ’s core tenets, and which organizations and projects should be garnering the most focus and resources. While observing these discussions about IWJ’s future, I noticed how they had to balance the possibility of measurable success with moral ideals and ideological consistency. No one answer was found at the Convening, but coming together meant tangible bonding as a community in a way that could not be achieved with conference calls alone. In order to enact change, you have to create connections with like minded people from a variety of backgrounds. At the Convening, I saw religious leaders and worker center leaders interacting about their commonalities, and it gave me hope for the future.

Personally, I found it extremely gratifying to see the small details that I contributed adding up to create a bigger picture, even if they seemed insignificant at first. For instance, knowing that we were successfully able to have the programming simulcast in Spanish and English, and having near seamless transportation and registration for the individuals involved gave me great pride, since I knew the role that I had played in putting everything together. When it comes to organizing, especially organizing around social justice where it constantly feels like an uphill battle against entrenched norms, every little bit makes a difference. Small tasks and projects that I took on, including finding more efficient ways of organizing equipment and schedule, were important components of an enriching experience.

There were two major events that stood out to me at the Convening.

The first was participating in a boycott action. We took buses to Wendy’s and stood in solidarity with the Coalition of Immokalee Workers by asking passerby to protest Wendy’s. It felt powerful; taking a tangible step to turn the theoretical ideas discussed in the conference rooms into reality. It reminded me how every person I observed and conversed with at the Convening is truly dedicated to the betterment of workers everywhere, especially as I heard the powerful speeches of the individuals I recognized from our day-to-day activities.

The particular issue that we were taking a stance on is related to Wendy’s refusal to join the Fair Food Program. As a brief summary, the Fair Food Program guarantees safe working conditions for tomato pickers in Florida and has been signed by Walmart, Burger King, Subway and many other large corporations. To learn more about this important campaign, please check out the website. 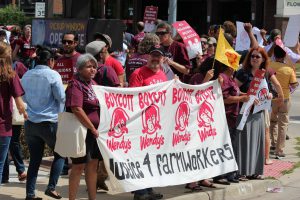 The other event was the viewing of David DeSario’s documentary, “A Day’s Work.” “A Day’s Work” delves into the story of Day Davis, a temp worker killed on the first day of work. The documentary was heart-wrenching because it both painted a picture of how much Day Davis meant to his family, and the way workplace negligence and proliferation of temporary worker agencies that don’t care about worker safety led to his demise. I was surprised at how common temporary work is within the United States, and how a labor activist who infiltrated the temporary work agency that placed Day Davis at his position at Bacardi reported that trainees are only given a thirty minute video before operating heavy duty machinery. Realizing the extent of worker grievances in the United States has made me more happy that IWJ and its affiliates are there to push for a system that puts worker humanity first and foremost. I encourage you to watch the documentary itself. 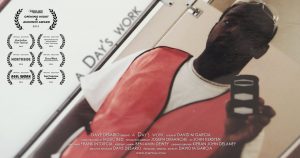 Onto the next project: Labor in the Pulpits!