The main goal of SIM lab is to investigate the neural and physiological factors that underlie social interaction and motivation in human beings. For this summer specifically, we are researching interracial interactions and how neural and physiological responses may vary when someone interacts with someone else of the same race, versus of another race. As a place of science, our main goal is to collect empirical data; meanwhile, individually we all hope that the information we find will be used to further the dialogue about prejudice and social attitudes and lead to a more egalitarian society.

As mentioned, our main strategy is to be as objective as possible when screening participants, collecting data, and analyzing data. We try our best to ensure that every participant that enters our lab has the same experience, and if anything should vary we take detailed notes. The screening process for me has been especially informative, because it highlights just how fluid the construct of racial identity truly is.

When screening a prospective participant, I have to ask them directly about their race, and there is a lot of uncertainty at times. For example, take a person who has one Caucasian parent and one African-American parent. Is this person white or black? Has their lived experience been more similar to a white person in America, or a black person? Factors like appearance and geographical location greatly inform how this individual has experienced him or herself, as well as the world around them. Moreover, how has this individual’s perception of their “in” and “out” group been affected by their biracial identity? There are so many confounding variables that factor into how someone socially interacts, and it is impossible to truly control for all of them, but we try out best.

The 2015 U.S. census predicts that by 2044 more than half of the U.S. population will belong to a minority group. That is a huge demographic change in a very short amount of time. It is impossible to predict what this sort of demographic shift will mean for America, but it makes it all the more important to be studying how people interact across race, and how social identity shapes human behavior. I hope that as our society becomes more diversified and mixed, social constructs such as race and ethnicity will become less important and less impactful in daily life. 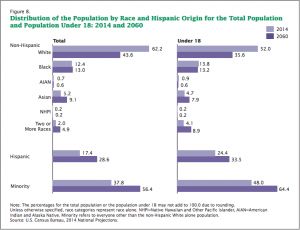 For us, here at the lab, evidence of prejudice and attitude changes comes in the form of anonymous data. Individual participants are turned into numbers in a data system. The data that we collect now can ideally be used as a reference and comparison point in the years to come. Nevertheless, it is exciting to know that the data we are collecting is impactful and meaningful, both in this moment and also for future research.