Founded in 1997, IWJ supports and advocates for a living wage, health care, safer working conditions, rights to organize and bargain, and protection under labor law both for U.S.- born and immigrant workers. IWJ condemns discrimination, harassment, intimidation and retaliation in and out of the work place. Overall, IWJ’s goal is to advance fair and just participation in a global economy that promotes the welfare of both domestic and foreign workers.

IWJ addresses these issues through a network of unions, worker centers, faith and labor organizations, guilds and NGOs that have similar agendas. By organizing congregations for campaigns around these issues, IWJ strengthens the working communities.

Grassroots worker centers, faith-labor allies and other groups in our network support workers and lead their communities and states in shaping policy and advocacy. The network includes more than 60 faith-labor organizations and worker centers across the country.

IWJ accomplishes its goals solely based on its networks. Without action networks IWJ would not be able to unite and mobilize the masses as it does now.

IWJ starts networking by connecting to both individuals that are acquaintances of IWJ members and the organizations that they hear, see or meet at the congregations, actions or panels.

Meeting the faith groups with unions and other labor organizations IWJ sets up a platform for workers of faith to talk and express the injustices committed at work. And the progress comes gradually as workers informs their friends and families and organizations hear more and more about IWJ. 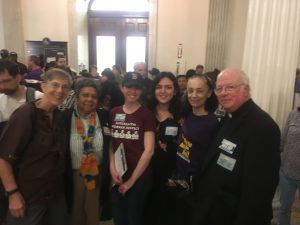